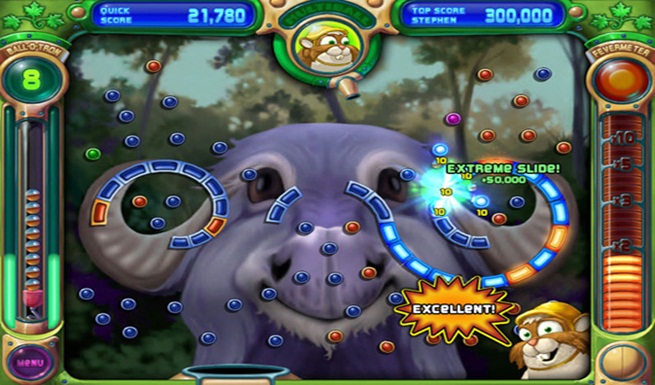 Mastertronic’s Product Director Neil McKenna said: “Surveys indicate millions of people are now playing casual games, with the majority playing online. The PopCap® Hits series groups together selections of great casual games and makes them available off the shelf as a boxed copy. With over 60% of gamers preferring physical copies of games rather than downloads, we’re delighted to make these great casual titles available on disc to buy in store and online.”

Survive the ancient temple of Zuma in this fast-paced puzzle adventure. (Players are challenged to fire magical balls from their stone frog idol to make matches of three or more and clear a chain of balls before they reach the golden skull. Zuma is based on a simple gaming mechanic executed superbly and utilises a variety of pleasing visuals to deliver a compelling and entertaining puzzle game experience.

Unleash side-scrolling shoot ‘em up arcade action at its best with Heavy Weapon. Fight through 19 story-based missions to upgrade six different weapon banks, or jump into instant action in Survival mode. Or work with other players and storm across enemy lines to defeat bosses in co-operative multiplayer modes.

Play Feeding Frenzy 2 solo or with friends, dodge predators and eat your way up the food chain to save the sea in this sequel to ‘Feeding Frenzy’. The sequel features new fish and sixty new levels. Other features also include your fish now having the ability to jump out the water, giving you the ability to catch prey that will not see you coming.