While there were some issues with the game at launch, particularly in the content area, Predator: Hunting Grounds has been a solid effort at capturing the classic horror-action series in the style of the original movie (you can check out our full review through here). But it’s about to get even more original, as the man who arguably put the franchise on the map will be coming to take vengeance on some Predator hunters at the end of the month.

It was announced via the PlayStation blog that the game would be adding the character of Dutch from the 1987 original. He was the protagonist of that film and found himself and his squad of soldiers being hunted by the first version of the deadly Predator. He was played by the legendary Arnold Schwarzenegger, who will return to the role here with both his likeness and voice.

To play as Dutch you will need to pay up, but there are free parts of the update. While purchasing Dutch will get you early access to them, the QR5 “Hammerhead” Rifle and Dutch’s Knife will also be free to get for all players. There will also be tapes of Dutch that recount what happened after the events of the 1987 film.

Predator: Hunting Grounds is available now on PlayStation 4 and PC. Dutch and the rest of the update will launch on May 26th. He’ll be the first of a DLC roadmap that’s been revealed, which you can see below. 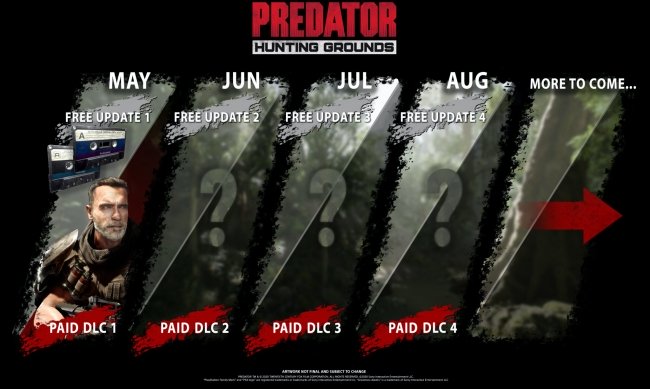