The Professor makes his debut on Nintendo’s new handheld. Does he deliver?

There is something comforting about reviewing a Professor Layton game. At this point, the franchise has settled into a steady routine, with an installment released each year, and the series sticking to its strengths, without mixing the formula up much. And yet, unlike other annual franchises that begin to feel stale after a while, such as Call of Duty, Pokemon, Mario, and FIFA, the Layton games always remain a joy to play, and in spite of their insistence on being formulaic to a fault, somehow still manage to surprise and delight.

With Miracle Mask, the first entry on a new platform that prides itself on its visual enhancements, Layton had the first legitimate chance to break out of the established mold and perhaps attempt something slightly more ambitious. But the eponymous gentleman chooses instead to stick to what he knows best, and deliver another great adventure with charming characters, brilliant storytelling, and some of the trickiest mindbenders in the series.

Miracle Mask, of course, plays exactly like every other Layton game in the series. For those still not in the know (and seriously, shame on you if that’s the case), the Layton games are best described as glorified interactive puzzlebooks that you used to have so much fun solving back as a kid. Unlike just about every other puzzle game series that originated on the DS, the Layton games try to give you some context to all the puzzle solving by wrapping them up in neat, genuinely intriguing mystery stories, that the characters try to solve. The puzzles themselves are mechanics representing the characters’ attempt to decipher clues towards the final mystery. Yes, Layton is gaming’s very own Sherlock Holmes. 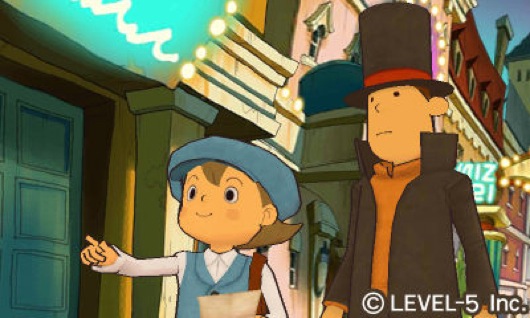 The stories are almost always exciting and filled with unexpected twists, so that you’re playing the game as much to know what happens next as you are for the puzzles themselves, filled with well developed characters, and all of it told via a distinct, anime like style, well animated, well voiced, well directed, and generally well beyond the quality of story presentation expected in a video game, especially a handheld game.

In that regard, Miracle Mask is no different, as you find Professor Layton and his ‘apprentice’ Luke along with his assistant Emily being called to a town by an old friend to sort the mystery of a Masked Gentleman who is causing problems, and has promised to destroy the town using his mask. Pretty much the standard setup for a Layton story at this point in time, but as always, it comes with its own twists and turns, and the ending is perhaps particularly exciting and unexpected, and unlike so many entries in the franchise, actually appears to make sense. It’s not on par with the best ending of the series (Unwound Future’s heart wrenching conclusion), but it’s pretty much on the right side of the scale.

A great part of the story are the Layton flashbacks, focusing on Layton’s days in high school and clearing up a lot of mysteries about his character. These are great, clearing up so much about everyone’s favorite top hatted Professor, and actually being sweet and entertaining in their own right. The only problem is, there aren’t enough of them. We need more.

The meat of the Layton gameplay are the puzzles, and in that regard, Miracle Mask doesn’t disappoint. The game is packed with all manner of puzzles, with there being a round one hundred and fifty of them available this time. Unlike in Last Specter, the puzzles don’t repeat themselves so much, and are actually very well varied. In fact, I would argue that they are the best of the bunch so far, second only to Unwound Future. If there is any criticism to be leveled at the puzzles, it is only that they don’t utilize 3D all that much. With Layton’s emphasis on puzzles, there was some real scope to have some truly mind bending 3D exclusive puzzles, but the game opts to use 3D for some visual panache in puzzles instead, never making them essential to the solution. Ah well. 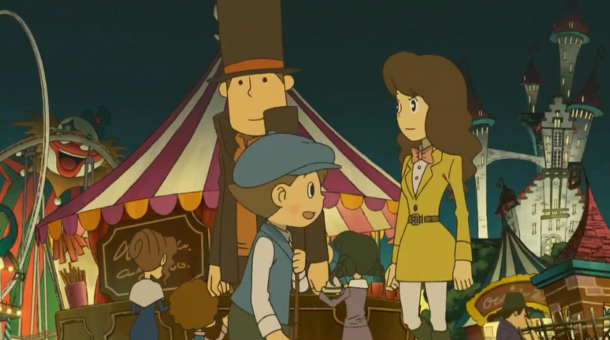 The main Layton campaign is meaty enough, and should last you a good dozen hours, after which you can still continue to play the story mode to finish any number of the minigames the game offers, or try and work your way through the unfinished and unsolved puzzles. In addition to that, you also get one free puzzle a day, every day, for a full year as free DLC over Nintendo Network. Now that’s DLC done right.

Again, the only criticism about the post game content is the lack of a full fledged RPG mode that Last Specter offered with London Life. While that is probably an unfair standard to judge all subsequent releases against, it’s not unreasonable- you expect every progressive entry in a series to be better than the last one.

Professor Layton and the Miracle Mask is ultimately a great game, and a damn fine Layton game. It’s a great debut for the Professor on all new hardware, and ultimately better than last year’s somewhat underwhelming Last Specter. It still doesn’t manage to scale the heights of the original trilogy games, but it comes pretty darn close. Ultimately, it probably stays too safe for its own good, but it sticks to doing what it knows best, and what it knows works. As long as that is fun, it doesn’t matter. Like a true gentleman, the Professor delivers yet again.

Too safe and formulaic for its own good; the lack of 3D usage feels like a missed opportunity; post game content not as meaty as some of the previous games in the series

Not the best Layton game, but a damn fine one. Professor Layton delivers yet again, like a true gentleman.