The Professor makes his debut on Nintendo's new handheld. Does he deliver? 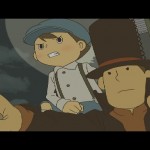 Layton Vs Phoenix Wright is Japan only but you can bring it to the west!

Level 5's mega crossover game for the 3DS , Professor Layton VS Phoenix Wright which it announced during Vision 2010 conference yesterday is only a Japan-only title right now. However, if you gamers... Read More