Posted By Kartik Mudgal | On 15th, Aug. 2012 Under News | Follow This Author @KartikMdgl 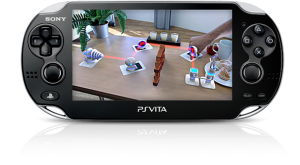 Remember Augmented Reality? Yes you already got a glimpse of how it works when Sony released the Vita. The handheld shipped with 6 augmented reality cards, which could be used with the handheled’s rear camera.

We already reviewed these games when the PS Vita launched, and at GamesCom 2012, they revealed a new trailer which showcases a lot of augmented reality capabilities of the swanky new handheld of Sony. OK not really new, but it really is quite interesting.

The AR was first shown during Vita’s reveal at Sony’s special event in February 2012. It took everyone by surprise and even though they tried hard to push the tech, it hasn’t taken off as they would have expected. This  trailer shows some new possibilities of the tech and it requires a lot of push and advertising by Sony for a lot of people to appreciate the tech.