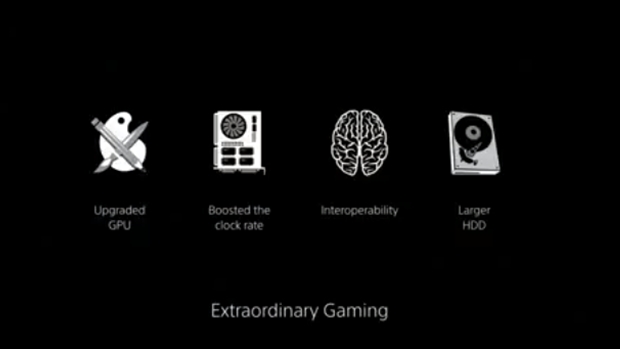 The PlayStation 4 Pro was never going to be the kind of beast that Microsoft is promising with the Xbox One Scorpio- it was always promised to be a smaller, more incremental step up over the existing PS4 model, a bit like the New Nintendo 3DS in principle. But we have to say, what Sony have announced at the PlayStation Meeting has still impressed us.

The PS4 Pro will ship with the same Jaguar CPU that the standard PS4 does- but its eight CPU cores will be clocked higher than on the standard PS4. The GPU sees a more substantial boost, with Sony claiming that it will have over double the power than the standard PS4 GPU. Sony is also claiming that they have adopted several features from AMD’s Polaris architecture, and some from beyond it. Higher bandwidth memory was also confirmed for the PS4 Pro at some point, although no more specifics were given.

All of this is to allow for better support for 4K and HDR visuals. Sony are claiming there are a number of hardware innovations they are adopting for rendering 4K images efficiently. All in all, it looks to be a pretty substantial upgrade- and it looks like for players who want the best PlayStation experience, the Pro is going to be an easy buy to gravitate to- especially since the library will be interoperable with existing PS4 systems