As retail exclusives for the Xbox 360 crawl to an excruciating standstill, Xbox Live arcade, its pioneering digital storefront, has gotten a second life, as it busts at the seams with the sheer amount of breathtakingly high quality and creative content flooding its annals. XBLA has had a ton of must have games over the course of the past half decade, including veritable masterpieces like Shadow Complex, Limbo, Braid, and Super Meat Boy. Add one more to the list, as the excruciating but mesmerizing Puddle joins the fray, and ranks as easily one of the system’s best games.

As a concept, Puddle is easy enough, and once it’s laid out on the table, it might be hard to understand just why Puddle is as addictive a game as it is. Puddle is all about guiding various liquids through increasingly narrow and twisting paths to a prescribed destination. The liquids can vary from water, to coffee, to dangerous chemicals, to orange juice, the environments can be as varied as a chemical factory, a sink, the inside of a man’s body, and to the inside of a spaceship in zero gravity. Puddle almost always gives context to why you’re doing what you’re doing- so, for instance, when you’re tasked with controlling some highly toxic substance through the forest, you’re told you can’t touch the walls of your maze even as the turns get more treacherous and the corridors narrower. If you do, you’re going to kill all the plant life. 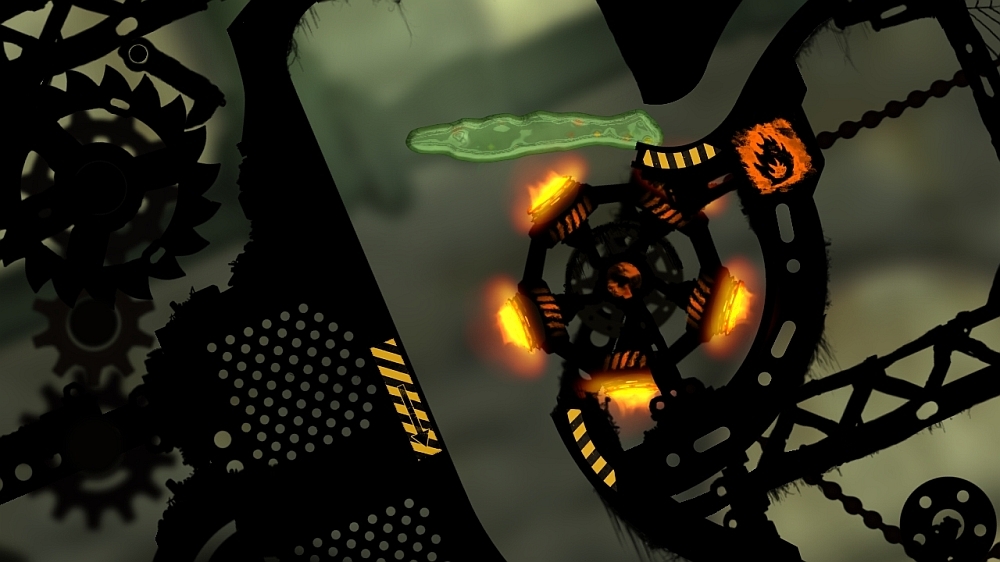 Puddle mixes it up not just with the substance you control (each of which controls differently, relative to its real life density and viscosity) and the environments, but also with the objectives, which aren’t always about guiding the substance home. One memorable instance will have you coordinating the pressure of a liquid, and you have to get it just right or you’ll fail the objective and be asked to restart again.

As a matter of fact, failing is something you’ll be doing a lot of. Puddle, you see, is hard- very, very hard. In spite of its deceptively simple control scheme- only the L and R buttons are used to control the flow of the liquid and have it gain (or lose) velocity and momentum- and relatively easy levels, at least to begin with, the game ends up becoming excruciatingly hard, demanding almost pixel perfect perfection from the player, lest he or she be thrown back to the beginning. Many a time, Puddle will have you grinding your teeth in frustration, gnashing them as you fail yet again, and yet you’ll find yourself persisting no matter what, simply because you know that your failure has to do not with broken design or imprecise controls- the level design is impeccable, and the controls are sharp, tight, and utterly responsive- it has to do simply because you could not respond to the game’s (admittedly demanding) needs. And so, you’ll yell and you’ll curse, but not the game, because the game is good at what it does, but at yourself for not being able to rise to the challenge. 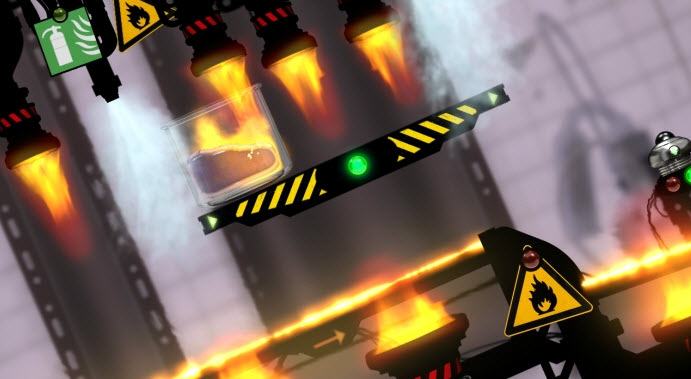 And yet, in spite of all the frustrations that Puddle can induce, there is an odd, calming, almost hypnotic, trance inducing quality to the game. The graphics of the game are lovely, as each liquid flows through the environments (all convincingly crafted, by the way) in ultra slow motion. You can see individual droplets coming together, and you can see the liquid rippling, undulating, coalescing, deforming, reflecting, and seeing how convincingly each fluid moves is mesmerizing to say the least. Of course, the trance is almt often instantly broken as you are rudely reminded that you are in fact supposed to be guiding your liquid to its destination.

Puddle is a gem of a game. It’s incredibly hard, and that might put off many who lack the patience, but for those who can appreciate its grueling difficulty and the loving way with which it clearly revers physics and fluids, the game will be a revelation. As a retail release, I would have had no hesitation recommending it. As a digital release, it’s a freaking steal. Go for it.

Can get incredibly difficult and demanding; esoteric concept might not appeal to everybody

Final Verdict:
EDITOR’S CHOICE
Puddle is a gem of a game. It's incredibly hard, and that might put off many who lack the patience, but for those who can appreciate its grueling difficulty and the loving way with which it clearly revers physics and fluids, the game will be a revelation. As a retail release, I would have had no hesitation recommending it. As a digital release, it's a freaking steal. Go for it.
A copy of this game was provided by Developer/Publisher/Distributor/PR Agency for review purposes. Click here to know more about our Reviews Policy.