Once, id Software was synonymous with revolution, innovation, and the very genre of FPS. Why? Well, because they basically created the First Person Shooter genre of games. Games like Doom, Wolfenstein and Quake, forefathers and blueprints of shooters in the past and recent years, have all come out of the id Software banner. And now, after so many years, when the legendary John Carmack and his development team have released another game, all eyes are on it, and everyone is asking the same question- will Rage live up to its forefathers, or do the creators of the FPS genre no longer know what to do with the genre anymore? 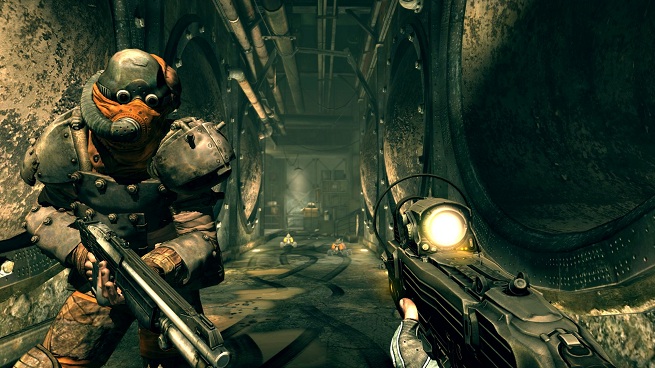 Behold, one of the best looking games till date.

My answer to all those who’re seriously asking this question: don’t be stupid. If anyone knows how to make an awesome, full blown FPS, it’s id Software. The game bears resemblances to several modern day shooters like Fallout, but at heart, its an old school game where you need no excuse to shoot baddies.

More than anything, Rage is a landmark in technical achievements. Everything from the destroyed overpasses and bridges to the character models of the mutants and the lines and wrinkles on faces of the characters has been done excellently. Tons of detail has been poured into every nook and cranny of the game, and it looks simply brilliant. I have to say, very few games, be it on the PC or the consoles, have looked so good, and I doubt many will for a long time. Artistically, the game is just as breathtaking. The wasteland is a surreal and beautiful place, and its clear that the developers gave a lot of thought to how it should basically look and what kind of a feel it should give off. The art style works perfectly in relation to the technical aspects of the game, resulting in a visually surreal experience.

Even the animations are very well done. Facial animations and lip syncing are wonderful, and the characters and foes move believably. When a foe gets shot, it cringes or falls to the ground and rolls around, moving different each and every time, producing a lot of fun animations that are a joy to watch. Even the sound effects are very authentic, with each weapon and ammo type sounding different with a distinct feel to itself. 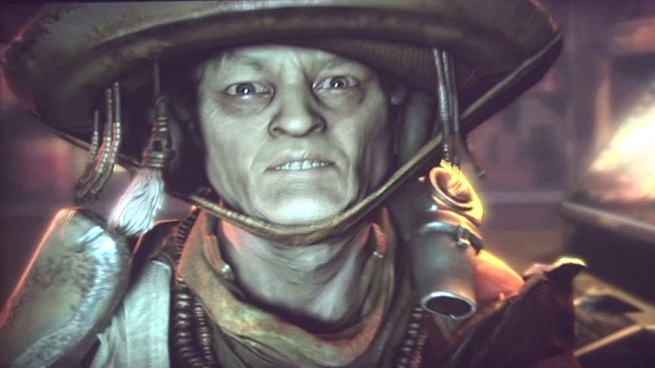 And yes, that brings us to the real hero of Rage- the ammo and weapons. Rage is as fun as it is because of the sheer variety and creativity it shows in its weapon arsenal and ammo repository. Each weapon is customizable, but not in the conventional sense where you use different parts and upgrade in levels- that’s there too, in part. The real fun in customization is when you use different ammo types in your weapons. You can use a rocket from an RPG in a shotgun to make it a grenade launcher, you can use sniper rifle bullets in machine pistols to give them more “oomph” and impact, you can use pistol rounds in which all 6 bullets fire at one, you can use this weird looking crossbow-type thingie that’s  a blast to use. You can use whatever weapon you want, and whichever type of ammo you want. It adds an element of complexity, replay value and most of all, fun in the game- which is what basically Rage is all about. Believe me, there’s nothing more satisfying than seeing see enemies fly when you use a grenade as a bullet in a shotgun.

The other element of Rage- the vehicular sections- also provides a bucketload of fun. The sense of speed is vicious, and trying to blast your enemies away with your crazy weapons while driving through the wasteland is crazy in a good way. The buggy handles very well, and it makes getting from point A to point B a very enjoyable task. The journeys are never boring, since you always have enemies to shoot at, and even if you don’t driving in itself is extremely enjoyable.

The setting of the game is something we’ve all seen before- a post-apocalyptic wasteland. In December 2029, the Apophis meteorite crashes into the Earth, causing widespread destruction, death, and a 6 year long winter. It is 106 years after that, when the dust in the sky has settled back and the pockets have civilization have scattered into clans and there is practically no hope for humans, that Rage takes place. The setting is very interesting, and there is always a feeling of depression deep in your stomach, and a little lump forms in your throat every time you think of the fictional destruction that must have taken place in that meteorite crash. I guess we can take relief in the fact that we didn’t get killed the the dinosaurs did, eh? 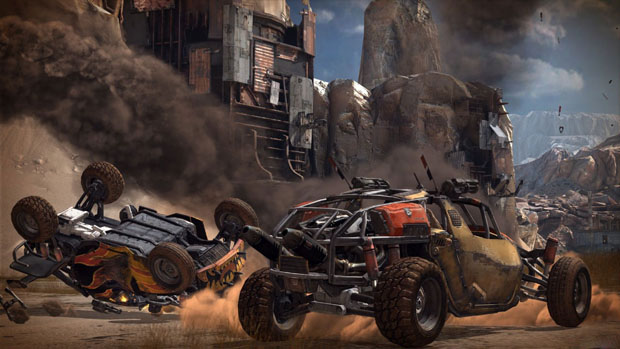 Driving the buggy through the wasteland is a hell lot of fun.

The characters we meet throughout our journey are quirky, extremely likable and, like the rest of the game, full of personality. Doesn’t matter if you see them just for five minutes or keep seeing them throughout the game. They’ll leave an impression on you, with their great personalities and great character design.

The story of the game, though, is a little on the light side. Actually, that’s a bit of an understatement, because I’m not sure Rage even has a story. The setting is great, and with such a rich game world and interesting setting, id Software could have delivered an excellent story. It’s true that John Carmack doesn’t care about narratives in video games, but a little more focus on story would have helped the game’s overall experience.

It is also true that Rage gives us a false sense of freedom. The world seems large and open, but actually, it’s quite linear and so is the level design. There’s very little scope for exploration, and very little to do outside of the main story and a few side missions.

Rage also has a multiplayer component, where you and your foes drive buggies in a map, shooting at each other and performing several sets of tasks. The variety of weapons definitely improves the quality of this mode, and the MP component does provide with a lot of fun, but overall, it’s a pretty shallow experience, and not something that’ll make you want to keep coming back to Rage. 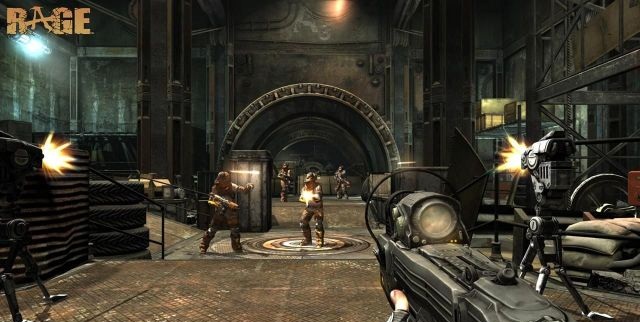 Shooting baddies has never been better.

But at the end of the day, Rage is all about technical fidelity, and more importantly, fun- both of which Rage excels at. The graphics and the technical aspects of the game are outstanding, and you’ll find you simply staring at your screen with your mouth hanging several times throughout your playthrough. The combat is brutal and fun, made even more so by the great, innovative ammo and weapons system, and driving through the wasteland is a whole lot of fun. If you can look past the faults of the game- and given the pros of the game, you will– Rage is definitely an experience you will not soon forget.

Story is almost non-existent; Some texture pop-ins; Have to keep saving constantly to avoid huge loss of progress upon death; Not much to do outside of the story; Level design is mostly linear

Final Verdict:
EDITOR’S CHOICE
id Software is back with a bang.
A copy of this game was provided by Developer/Publisher/Distributor/PR Agency for review purposes. Click here to know more about our Reviews Policy.