Ratchet and Clank: Rift Apart is Probably Going to be a Much Bigger Deal Than You Think

Insomniac’s upcoming action-platformer might just become one of the PS5’s biggest games.

The PS5 announcement event a few months back shed light on many things about Sony’s upcoming hardware behemoth. The games, the features, the look of the console, and the optional digital edition were all notable nuggets of information we learned. But easily one of the more tantalizing items featured in that event was the new Ratchet and Clank game; Rift Apart. The Ratchet and Clank series is one of PlayStation’s oldest at this point. Certainly, one of their oldest of their still relevant series, at least. Given that, the announcement of a new game in the series was not a huge surprise.

Many of us here at GamingBolt and other outlets saw that coming a miles away, actually. Ratchet worked well as an early PS4 title, so why not stick it right at the launch window of the PS5 to round-out the selection of launch titles? Well, Rift Apart, the newest of the long-running sci-fi platformer shooter series, was in fact announced, but still managed to surprise us all for several reasons. It’s those reasons, as well as a few others, that people should definitely keep an eye on this game. It could absolutely end up cutting through the competition in a bigger way than many of us realize, and surprise us all over again with how big of a game it could very well end up being.

The first thing you’ll notice when seeing either the announcement trailer or the extended gameplay trailer that recently dropped is just how drop dead gorgeous this game is looking. Ratchet and Clank games have always been vibrant and interesting games, even the PS2 original games still look great, but obviously nothing even comes close to touching how visually stimulating Rift Apart is promising to be. Everything from the outrageously saturated colors, the 4K textures, and of course the real-time ray-tracing that can be seen on Clank and a handful of other surfaces, this game will have plenty of eye candy for every technophile and graphics hound out there, and really seems to be delivering on the promises of the PS5.

The 2015 Ratchet reboot, despite its flaws in certain areas gave us a taste of where the series could be headed in terms of graphical prowess, but with Rift Apart, it appears to have reached its destination. A true Pixar-esque look with all the real-time reflections and advanced shaders and textures that come along with that are all present here, with a nice dose of insane particle effects sprinkled on top of everything else. Surely there are more graphically intensive games that will end up on the PS5 within the launch window, and surely Rift Apart’s style isn’t going to be for everybody under the sun, but what the game’s visual style does do that it’s competition doesn’t, is show all of these things off in such an over-the-top way, that the next-gen bells and whistles will be completely impossible to ignore. This game will appeal to the typical Ratchet and Clank audience, yes, but as a result of these visuals, it will also be in a unique position to also appeal to those who are just interested in seeing what the PS5 can really do on day one as well. That alone, should lead to a more than successful launch for the game.

The graphics and presentation aren’t the only way the new Ratchet and Clank plans to harness the power of the PS5 though. As you will undoubtedly notice from watching either official trailer that has dropped so far, this Ratchet game has a unique twist with what appears to be rifts in the space-time continuum that amount to wormholes, or portals from one location to another, allowing you to skip whatever distance there is in-between, and skip virtually all the loading times as well. It’s important to note that the total functionality of these rifts remains somewhat unclear. So far we’ve largely seen them used in two main ways. 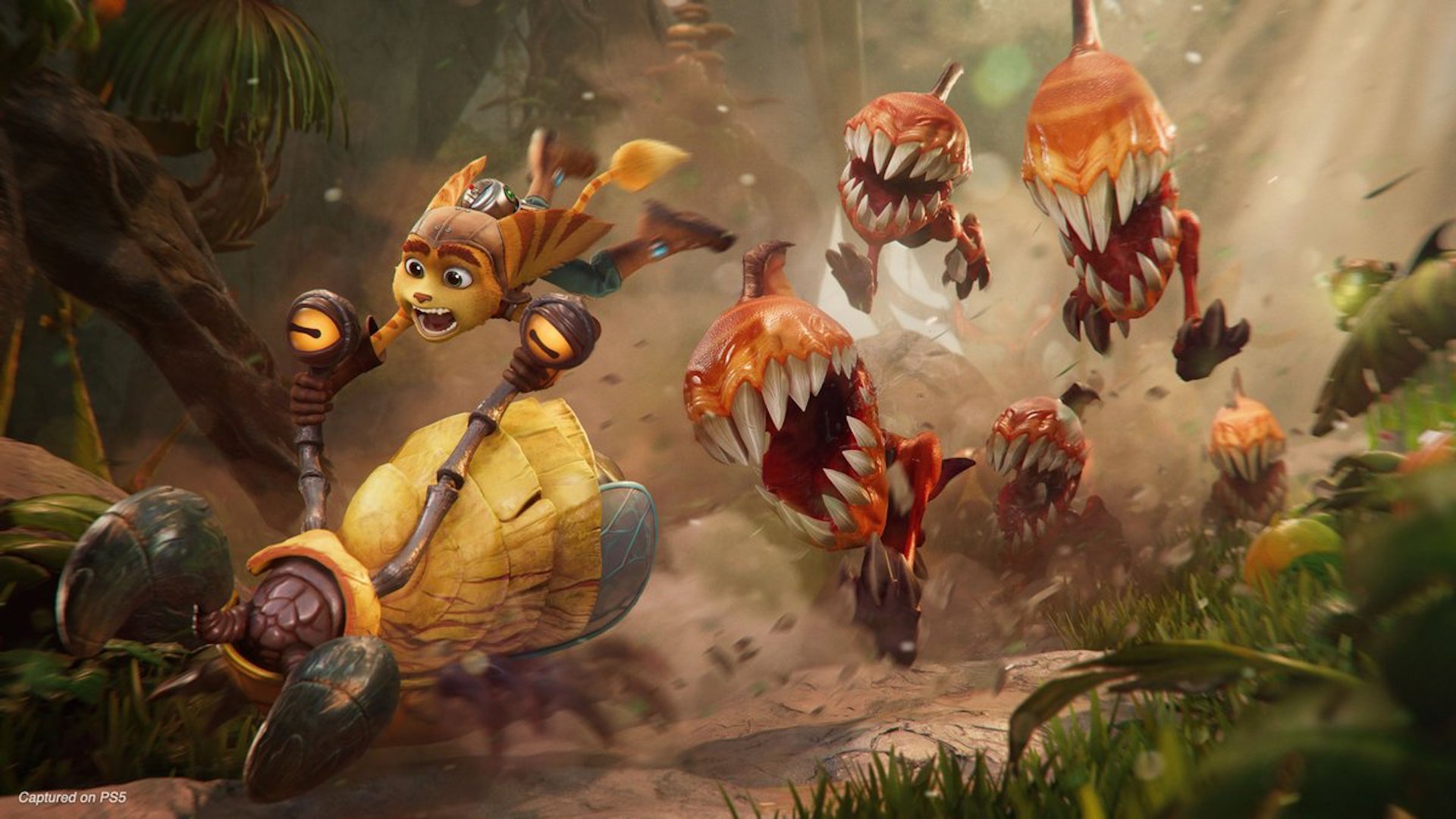 First, as a tactical mechanic that can send Ratchet popping out of one end of a firefight and pop into another. This seems geared at giving the player a way to flank enemies and circumvent more problematic areas when traversing a level. Kind of like the portals in Pac-Man, but in Ratchet and Clank. Second, as a more noticeable departure from one world to another, entirely different one with different lighting, color pallets, and entire design. This is a rather impressive little wrinkle to have on top of everything else and a very creative way to illustrate what PS5 games will be made capable of when they can shrink their load times into such small windows of time that they are basically unnoticeable.

Outside of concealing load times and blowing our minds with graphical prowess, Insomniac’s latest entry in this long-running mascot franchise also has another distinct advantage that puts it well ahead of much of its competition, itss built-in audience. While it is true that many absolutely amazing games have and will be coming out this year, most of them can’t say they have an audience that spans all the way back to the PS2 era. Ratchet and Clank: Rift Apart does.

As a result, the pool of types of gamers that are interested in this new game, is much larger than it might seem. Those that had PS2’s the better part of two decades ago all likely played a Ratchet game at some time between then and now, and as such, are at least somewhat interested in Rift Apart. This type of support goes a long way. While not every gamer who played the franchise back in the day is guaranteed to pick up the newest one at launch, many will, and that is an advantage that many other games launching this year simply don’t have, as they have to create their own audiences brand new, from scratch. 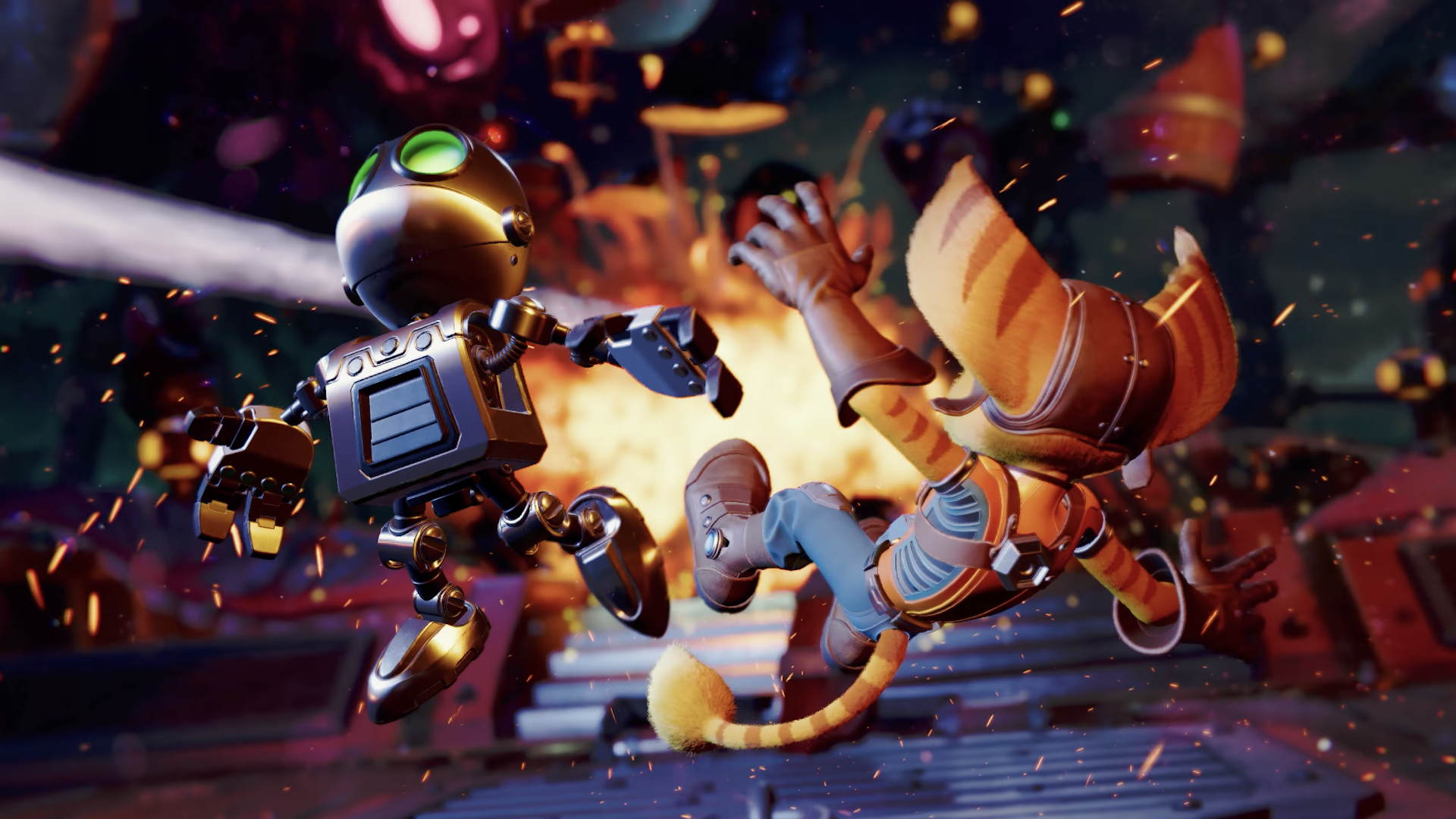 Something that Rift Apart also seems to be doing is breaking the rules of the series a bit. Or at least bending them a little, by seeming to revolve around Ratchet and Clank being separated for much of the game. While this isn’t exactly reinventing the wheel for the series, as much of the previous games had long sections where the characters were separated, that particular narrative device has not been deployed in such a central way for the story as it appears to be here. Given the title of the game and the nature of the rifts that the game seems to be centered around, it’s probably safe to assume that Ratchet and Clank spend much of the game apart, trying to reunite all while keeping the forces of Nefarious at bay and saving the universe from whatever evil plan he’s cooking up this time. This particular element might not move a ton of units on its own, but it could push some off of the fence who might otherwise be worried about this game being “more of the same” despite the ample evidence to the contrary.

Rift Apart is in a nice position of being able to show off the power of the PS5 while also bringing back a beloved PlayStation franchise that has laid dormant for several years. Given that, and the fact that it appears to be some form of a sequel to the latest game in the lineage, Into the Nexus, it should do a good job of serving old fans of the series, technophiles looking to benchmark the PS5’s triangle-pushing capabilities, as well as the more casual early PS5 adopter who just wants to blow crap up in 4K on their PS5. All good reasons to pick up the game, and all reasons why it’s likely going to be much bigger than we think.