We’ve heard the same story over and over again: the console games of today – or of the current generation, to be more specific – are becoming easier and easier to pull off on mobiles. Consider that three years ago that games like Angry Birds and Cut the Rope were igniting interest in smartphone games like never before. Now, companies like Nvidia, Qualcomm and ARM are doing their part to bring Xbox 360 an PS3 level games to smartphones and tablets. One of the major forerunners of this is GameBase and its engine, Reach3dx.

Reach3dx not only aims to bring a fully featured engine to mobile platforms but to allow for decreased development times in the process. GamingBolt spoke to Marketing & PR Manager Bryan Tarlowski along with Senior Lead Engineer on Reach3dx Paul Welch about the engine and the potential it holds.

Rashid Sayed: Can you please tell us a bit about yourself and the humble beginnings of GameBase?

Hello, my name is Bryan Tarlowski and I am the Marketing and PR manager for Gamebase. Paul Welch, who is beside me, is the Technical Director on Reach3dx. He will be answering most of the technical questions.

Rashid Sayed: GameBase has primarily focused on making engines for console games. I understand that the emergence of mobile gaming might be one of the reasons but other than that what were the reasons behind the development of Reach3dx?

With the industry shift to mobile gaming, we needed to create a new solution. We developed solutions for taking existing Gamebryo games and porting them over to an Android device, which is a great feature for current Gamebryo users. Meanwhile, there was a small team at Gamebase focusing on a brand new engine written from the ground up. It would eventually be Reach3dx. Gamebryo presented a robust development environment, but it was simply too large and full featured for mobile and web game development. As a result we started working on Reach3dx. There are two main goals of Reach3dx: the first is to provide cross-platform rendering that is flexible and high quality, and the second is to decrease development times so users can get to the market faster. 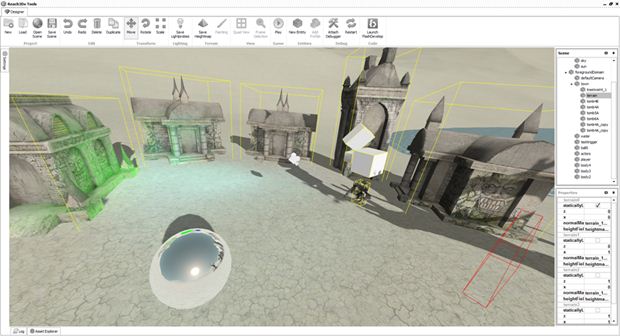 "The combination of OpenFL and Haxe was something that just made complete sense to do from a performance and user experience perspective. OpenFLand Haxe present a familiar game development environment where cross-platform games can be run in native code."

Rashid Sayed: What kind of advantages and challenges have OpenFL framework and Haxe bought into the development of Reach3dx?

The combination of OpenFL and Haxe was something that just made complete sense to do from a performance and user experience perspective. OpenFLand Haxe present a familiar game development environment where cross-platform games can be run in native code. It’s also an extremely easy development framework to use. Developers can prototype and build their game up very fast.

Rashid Sayed: How are you planning to position Reach3dx differently compared to Unity?

Rashid Sayed: What kind of tools will Reach3dx provide so that cross rendering is not only time saving but is of the highest quality?

We have a full feature editor that allows the developer to setup your game scene. One of the great features of Reach3dx is that all the features will work cross-platform, so your game will look the same no matter what platform you run it on. We will utilize the latest versions of Open Gland Web Gl, as browsers and mobile devices also support them.

Rashid Sayed: Reach3dx is based off the popular GameBryoengine which was primarily used for PS3 and Xbox 360 games. What kind of programming challenges did the development team faced while pulling out parts from the GameBryo engine over to Reach3dx?

Actually, Reach3dx is written completely from the ground up! No lines of code were taken over from the Gamebryo engine and placed into Reach3dx. This is a fun statistic; The Reach3dx code size is about ¼ of just the Terrain system in Gamebryo. 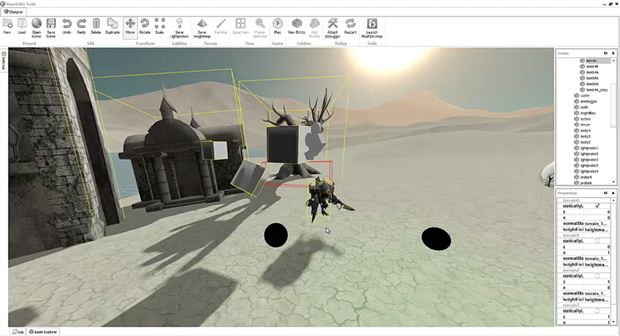 "Certainly! With the work ARM and Nvidia is doing, it’s going to be very soon where we see last generation console quality on Mobile platforms."

Rashid Sayed: Furthermore, does this also indicate that mobile games are now at console level quality? [Since you are now using portions of the GameBryo engine]

Certainly! With the work ARM and Nvidia is doing, it’s going to be very soon where we see last generation console quality on mobile platforms.

Rashid Sayed: Unity is already doing an awesome with their set of tools and middleware technologies. They recently announced Unity 5 which is a level above compared to its previous iterations. Do you think Reach3dx will have its task cut out since there is no denying that Unity is now considered as a de facto solution for mobile gaming?

We absolutely have our task cut out for us! There are many companies offering development solutions. I think we have cut out a comfortable space for ourselves and offer enough differences to attract developers over to Reach3dx.

Rashid Sayed: When do you think you will start licensing Reach3dx?

Reach3dx will be available later this year.

Rashid Sayed: Furthermore Epic Games have announced their aggressive strategy to give developers full access to Unreal Engine 4 for $19.99. How does this affect your business model for Reach3dx?

Their decision to offer a monthly contract at GDC was interesting, and it was even more interesting watching companies like Crytek react! It doesn’t affect our business model for Reach3dx much, and we are pricing on a small per-platform price with no royalty fee.

Rashid Sayed: Is there anything else you want to tell about Reach3dx?

We are conducting an open Beta currently with Reach3dx. We are essentially sending out the engine in its current status and asking people to check it out and make a game with it! You can sign up for the beta by contacting GameBase.