ReCore Review – Diamond In The Rough

A flawed but magnificent game.

ReCore is the perfect example of a game that has nearly every element of being a huge, triple A success, but is held back by rushing it out in an unpolished state. Developers Comcept Armature Studio (the team from Retro Studios known best for Metroid Prime 3: Corruption) had the right idea from the very beginning, but somehow missed a few pieces to the puzzle down the line.

It almost pains me to see a game with so many interesting ideas and concepts get wasted away by the numerous flaws impeding ReCore at its core (no pun intended). From audio problems, exhaustively long loading screens, unfinished textures, random invisible walls, and hollow platforms, ReCore fails to see the justice and success it very much deserves.

ReCore is a third-person action/adventure-RPG with numerous other genres thrown in for good measure. And surprisingly they all work very well together.  You play as Joule, an auburn haired young woman who’s suddenly awoken from cryosleep to help fix a few malfunctions going on around the world. Upon awaking up, she’s joined by her Corebot dog Mack. Joule quickly finds out that nothing went right at all when the colonization was taking place and she’s made it her job to find out why. Along the way she befriends robot companions known as Corebots, her dog being one of them. Corebots help Joule get from one location to the next, however, do note that not all Corebots are friends.

"Joule’s weapon of choice is a laser rifle she carries along her backside that initially shoots white laser beams. As you progress, Joule unlocks other colored lasers that take advantage of the corresponding colored Corebot enemy types. "

Joule’s weapon of choice is a laser rifle she carries along her backside that initially shoots white laser beams. As you progress, Joule unlocks other colored lasers that take advantage of the corresponding colored Corebot enemy types. Red lasers are strong against red Corebots, yellow lasers are strong against yellow Corebots, etc. Later on there are enemies that do not correspond to any known laser type. This forces you to quickly select through your laser collection (a quick tap of any of the four directions on the D pad) to figure out which color does the most critical damage possible. And that’s not everything to taking out enemies. The game adds in clever elements while keeping the action extremely fast paced. Some enemies will ensare Joule by paralyzing her, setting her on fire, etc. The game will then inform you to pan the analog stick from side to side, or mash A to escape these traps. It really adds a new element to increasingly difficult battles.

As Joule weakens the enemy up to a certain point, she has the opportunity to either kill it or collect its Core. Shooting a Corebot until it dies unleashes loot that varies from one Corebot to the next; this can be anywhere from credits, Corebot parts, crafting items, and Core shards that can be used to upgrade your companions — and of course experience points that help strengthen several gameplay parameters. Extracting a Core requires Joule to use her automated grappling hook that shoots out and grabs hold of it. Additionally, this grappling hook is used for many other elements such as opening locked doors and more — it’s really a pleasure to find new ways of defeating enemies with the game’s “tug and pull” system; overall I just love the grappling hook. 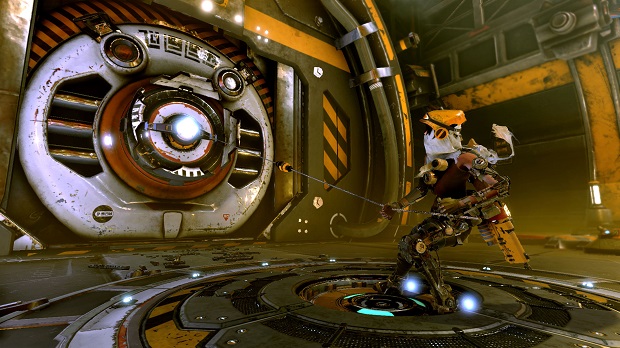 "Extracting a Core requires Joule to use her automated grappling hook that shoots out and grabs hold of it. Additionally, this grappling hook is used for many other elements such as opening locked doors and more."

ReCore’s main focus isn’t exactly on Joule but rather her Corebot companions. Each Corebots contain a core of their own and can be switched around to different frames deeper in the game. Corebots help fight off oncoming enemies with their own unique skill sets; however, you cannot control your companions, with the exception of telling it who to attack. Outside of battle, Corebots help guide Joule’s journey along further by digging spare parts, crawling on tracks to get higher, and much more. What I found in the abilities of the Corebots had me extremely pleased. I got a much greater sense of adventure when I had to get to a very high location, or cross between a large canyon when I had to rely on my Corebots abilities for assistance. And just when I thought I had uncovered it all, there was surprisingly much more to be uncovered.

The game’s world isn’t exactly huge. From the moment you start the game you can look at the map and see every location the game has to offer instantly. Interestingly enough, what makes the world feel bigger than what it really is is the way Joule has to get around it. There are specific tracks and paths that can only be reached through the abilities of her Corebots, and after that the game makes use of some fun and clever puzzles to reaching certain destinations.

Not long after the game begins you’ll be introduced to your home base called the Crawler. The Crawler allows you to customize how you play the game at the workbench, and is used as a ‘anytime’ fast travel location. That means no matter where you are you can always travel back to the Crawler rather than having to used an assigned fast travel hot spot. 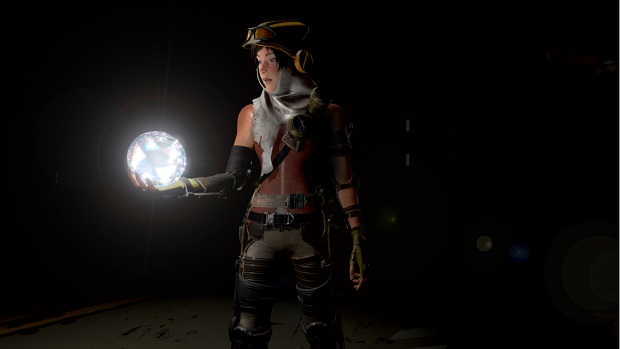 "Collecting Prismatic Cores is essential to completing the game as it takes a certain amount to get from one point to another."

The Crawler’s workbench is actually a lot of fun when you get the hang of it; it doesn’t take that long to get used to; and you’ll want to return as often as possible to continue to upgrade your Corebots. You can research blueprints which allows you to look at what parts you can currently design to attach to any of your current companions. Furthermore, when you collect Cores they turn in at the Core Fusion center which allows you to then put their energy into any of your Corebots. Cores can be placed into the categories: Attack, defense, and Energy to help improve their abilities on the battlefield. The The Crawler also includes a stash where random items drop can be found here upon returning to the Crawler. Stash items can be used as-is or combined into better parts to assist in creating new Blueprints.

Furthermore, Joule finds out she has to collect specialized Cores called Prismatic Cores that energize specific doors to further her adventure. Prismatic Cores are found in the game’s numerous dungeons and out in the open. Collecting Prismatic Cores is essential to completing the game as it takes a certain amount to get from one point to another. But don’t worry! You won’t have to collect many of them to get to the end. But if you’d like to get the most out of this short experience you’ll want to collect as many as you can; they also help unlock optional side quest dungeons that in turn help Joule collect more Prismatic Cores.

When Joule isn’t trying to figure out the strange new land she’s confusingly emerged in to, she will have several different dungeon-types to discover such as caves and factories. Another really enjoyable part for me was the layout of each dungeon. Each location is uniquely crafted with platforming elements, fun and very clever puzzles, and a whole slew of Corebot enemy types to blast away. There are a good number of dungeons to uncover and explore within the game, and each one is different with their own strengths. The dungeons really help ReCore shine behind all of its flaws. 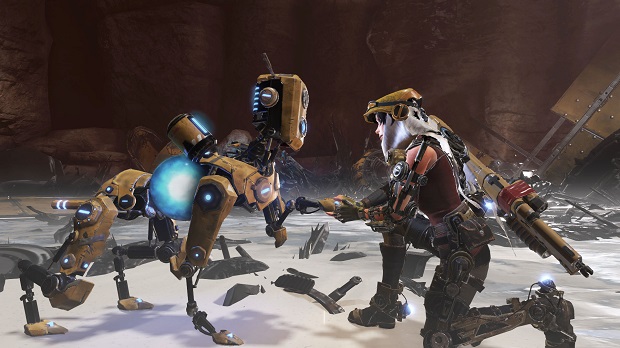 "If you can overlook the flaws, or wait for a patch to come in I could not recommend this game anymore. ReCore is truly a diamond set deep in the rough."

Flaws I say? Why yes! This is the part that hurts the most. ReCore feels like a triple A game covered in layers of ash. As games today go, it’s almost become mandatory to have a Day One patch ready for launch. I’m not sure if any such patch exists, but some of these flaws could be preventable in a future update. Right from the beginning there are audio dialog bugs at the start of each sentence. Moments where you’ll hear the characters say the first letter or two of a word, then stop, then start the sentence over again from the beginning. This happened for almost every piece of dialog spoken throughout my game and it became very annoying.

Unfinished, unpolished textures reign supreme within ReCore. When you first load ReCore up you’ll realize that it doesn’t look current gen at all. In fact, it looks like a mid-generation Xbox 360 game when the developers were still trying to figure out how to make games look good. Muddy textures and unfinished designs tear down the aesthetics of an otherwise great game.

ReCore is a game that has quite literally every element I look for in a hugely successful, triple A game; one that I know I will enjoy going back to when I just want to go out and explore or try something different, or find something I missed in my first run. The game has flaws aplenty, some are just downright unforgivable. So if you can overlook the flaws, or wait for a patch to come in I could not recommend this game anymore. ReCore is truly a diamond set deep in the rough.

The adventure is amazing. The Corebots are fun and bring new elements. Dungeons are plentiful with lots of battles.

Unbearably long load times that will make you cry. Unfinished and unpolished texturing throughout. Audio issues.

Final Verdict:
GREAT
If it wasn't for the extreme bugs and flaws that shroud ReCore this would be one of the best games I've played so far this generation. The good outweighs the bad. I hope for its success because this new IP deserves to be an ongoing franchise for everything new it brought to the table.
A copy of this game was provided by Developer/Publisher/Distributor/PR Agency for review purposes. Click here to know more about our Reviews Policy.