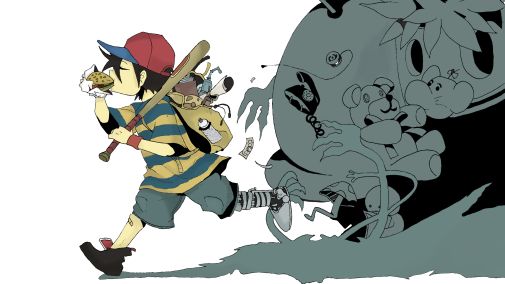 Fans of Nintendo’s Mother (or as it is known as in the west, Earthbound) series of RPGs are probably the most and longest suffering fans of anything in video games. The entire series has been on thin ice in the west since its conception, with the release of the very first game on the NES having been cancelled after it was fully translated at the last moment (it only just became available in the west for the first time last Sunday), the second game having never made it to Europe (the first time it was widely available was when it was released worldwide on the Wii U Virtual Console), and the third game, Mother 3 on the GBA, never having been released in the west at all.

Mother 3 has become sort of a holy grail of gaming- the same kind of status is accorded to it as is to The Last Guardian or Half Life 3. This E3, we came closer to the official announcement of Mother 3 in the west than we ever have been, when Nintendo announced and released the first game in the franchise to the west for the first time ever- leaving only Mother 3 as the game that hasn’t seen a release in the west.

In an interview with Kotaku, Nintendo of America head Reggie Fils-Aime strongly hinted that Mother 3 might happen in the west. “I think this is an example that demonstrates we’re constantly listening. We’re hearing what the fans say. And we thought it was great to bring back the very first Mother, Earthbound Beginnings here in the market. It’s been out for sale and doing quite well in the eShop. Again, we’ll never say never, but there’s nothing to announce right now,” Fil-Aime said. “The Mother/Earthbound series is quite niche. And so for us it’s constantly thinking about the investment and then return for a game like that. There is quite a bit of localization to be done and we just need to make sure that volumetrically there’s enough volume to offset that investment,” he continued, confirming that the success of Earthbound on the Wii U Virtual Console is what prompted Nintendo to localize and release Earthbound Beginnings.

Whether or not Mother 3 ever releases in the west is something that is yet to be seen, but at least now it is evident that the discussion is not yet off the table. To many fans, that will probably be enough for a while now.