Resident Evil 2’s Mr. X Is One of the Best and Most Terrifying Video Game Enemies We’ve Seen In Years

The upgrades made to Resident Evil 2 by Capcom benefit Mr. X more than almost anything else in the game.

Resident Evil 2’s reimagined Raccoon City is a terrifying place, reeling as it is from a catastrophic outbreak of a deadly bioweapon that turns everything living and breathing exposed to it into vicious, hungry monsters with severe anger management issues. As such, there’s a lot of “horror” going around in this survival horror title. And while that is something that should go without saying, it’s worth noting that it’s not always that easy to get horror right- all too often creators fall into the trap of taking things so far, of making things so blatantly grotesque and the scares so in-your-face that audiences become quickly desensitized.

Such is not the case with the incredible Resident Evil 2– Capcom knows when to show restraint and when to let loose, and understands the profound impact of not playing their hand too early, of keeping things understated when they need to be (which is a funny thing to say for a studio that also made Resident Evil 6- but we’ll let bygones be bygones). Resident Evil 2 doesn’t bombard you with entire hordes of zombies; the iconic Lickers are used sparingly and effectively; there aren’t enemies in every single room and location you visit; and every so often you come across a new type of enemy that changes the way you approach combat (or if you even approach it).

But no single enemy in all of Resident Evil 2, not even the Lickers, encapsulates the game’s style of horror as well as the Tyrant- the hat-wearing, trench-coat clad, hulking and menacing Mr. X. Resident Evil 2 can be exhaustingly intense when it really wants to be, and make its players feel suffocated under the weight of its oppressive atmosphere- it’s no coincidence that when that does happen (and it happens a lot), Mr. X is somewhere in the vicinity.

"Resident Evil 2 can be exhaustingly intense when it really wants to be, and make its players feel suffocated under the weight of its oppressive atmosphere- it’s no coincidence that when that does happen (and it happens a lot), Mr. X is somewhere in the vicinity. "

But before we get into just what makes Mr. X so scary, let’s first talk a little bit about what he is and how he functions within the game. Sent by Umbrella to Raccoon City to kill any remaining survivors as part of his mission to destroy all evidence of any wrongdoing on their part, Mr. X incessantly stalks both Leon and Claire – who are among said survivors – with frightening focus. In terms of gameplay mechanics, what that means is that after Mr. X makes his entry (about an hour or two into the A campaign, and much earlier than that in the 2nd Run), he’s basically a constant presence, and a very threatening one at that.

Though RPD isn’t the only location we visit in Resident Evil 2, it is by far the one we spend the most amount of time in, and for a large chunk of our time spent inside the police headquarters (a chunk that is even larger in the 2nd Run), Mr. X is right there in the building with us as well. He roams around RPD constantly, moving from room to room as he seeks out the player.

More often than not, the game puts him in the section of the building that you’re in as well, which means he’s never too far away. If you make too much noise (like, say, while shooting down a bunch of zombies), he gets alerted, and quickly makes his way over, and if he spots you, his acceleration can be alarming, completely belying his large and hulking form. You can never be too careless, never linger in any single area for too long. Knowing that he’s always out there, not too far away, bearing down on you, injects an incredible amount of tension into a game that is already overflowing with it. Every action you take needs to take his presence into account- solving puzzles, exploring environments, clearing rooms of zombies, looking for and picking up items. And if you ever have the misfortune of walking into a room with a Licker or two while Mr. X is chasing you down? Well, best of luck to you.

The sound design associated with Mr. X is also top notch, much like the sound design in the rest of the game. Moments when he spots you are accompanied with a blaring, percussive track that has to be among the best pieces in the game’s OST- but even more impressive than that are his footsteps. Yes, his footsteps. While he’s searching for you and going from room to room, you can constantly hear his loud, thumping footsteps, which grow louder and louder as he gets closer. There’s nothing quite as terrifying as hearing the crash of his feet banging into the floor on the ceiling above you, or in the room next to you. What that also does, though, is provide a handy audio cue- when you hear him coming, you know it’s time to bail. 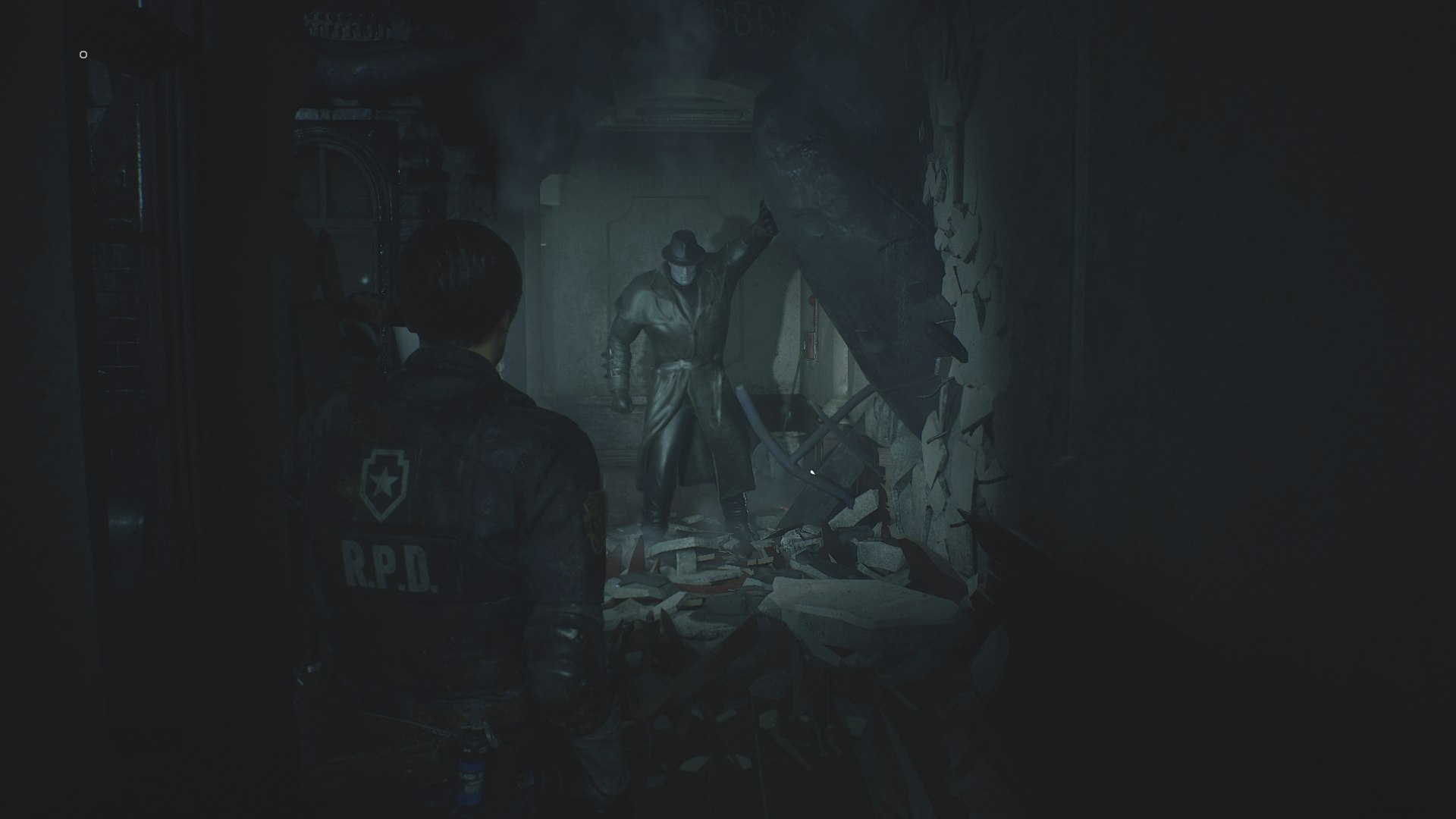 "While Mr. X is searching for you and going from room to room, you can constantly hear his loud, thumping footsteps, which grow louder and louder as he gets closer. There’s nothing quite as terrifying as hearing the crash of his feet banging into the floor on the ceiling above you, or in the room next to you."

Which leads to the thing I want to talk about next- Mr. X is never treated as a mechanic to unfairly heighten difficulty, or artificially inject tension or dread. He’s actually balanced really well- surprisingly well. His attacks hit hard, he’s surprisingly fast, and he’s always on your tail- an enemy like him could surely break a game very easily, and his presence could easily become overbearing. But Resident Evil 2 balances him in such a way that you always have just enough tools at your disposal that, if you use correctly, you can, most of the times, stay at least half a step ahead. His footsteps are one such tool, which I’ve already mentioned, but there’s also the fact that Mr. X isn’t constantly chasing you per se. He chases you when he sees you, but such moments happen organically during the course of gameplay, are very rarely scripted, and as such, avoidable if you put your mind to it. When he does see you, you can always try to flee and escape his field of vision. When he loses track of you, he goes back to going from room to room to look for you again.

What this also does is make you actually pause and think about the route you want to take when going from point A to point B. The RPD is a location you become intimately familiar with in Resident Evil 2, as has often been the case with several locations featured prominently in the series (the Spencer Mansion, the Baker house, among others). And so, while you’re planning what path to take, which corridors and rooms to weave in and out of to try and avoid Mr. X – or at least make sure that even if you do run into him, you’re not backed into a corner – you have the advantage of knowing the layout and structure of RPD very well. This, of course, also mingles with the slow and steady unlocking of the building as a whole- boarding up windows, clearing out rooms, and unlocking doors to open shortcuts becomes infinitely more satisfying, because going forward, you know which routes are safer than others.

So while you do feel powerless in the intimidating and oppressive presence of Mr. X, the game makes sure that you’re never really helpless. It also helps that Mr. X isn’t really invincible- unkillable, sure, but not invincible. He can’t one-shot you. If he closes in on you and grabs you, any secondary weapons you might have equipped act as your last line of defence. If you want a reprieve from his incessant stalking, you can also try and temporarily stun him- upon taking enough damage, Mr. X goes to his knees, and he stays like that for a handful of seconds, giving you plenty of time to escape, compose yourself, and get back to doing whatever it was that you had set out to do. Considering how much damage is required to make that happen, it can feel too wasteful, especially since ammo is always in short supply- but the option is always there for you. 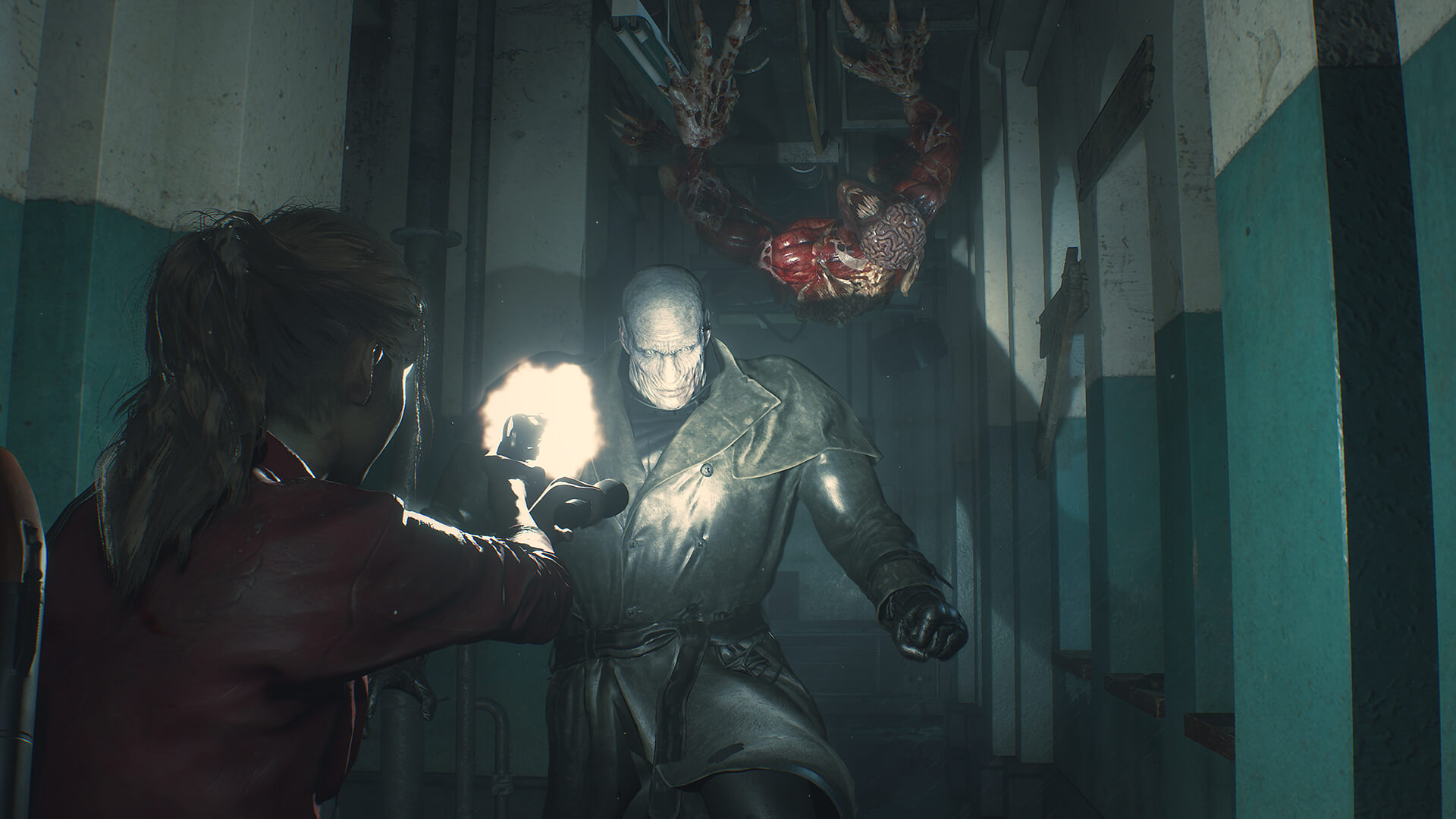 "Resident Evil 2 balances Mr. X in such a way that you always have just enough tools at your disposal that, if you use correctly, you can, most of the times, stay at least half a step ahead. Though you feel powerless in the intimidating and oppressive presence of Mr. X, the game makes sure that you’re never really helpless."

But Mr. X isn’t a new addition to Resident Evil 2 made by Capcom in the remake, of course. He was in the original as well- so what’s all the fuss about, you ask? Well, much like the entire game itself, Mr. X has benefited greatly from the new tech that Capcom have at their disposal, is no longer constrained by the limitations of 1998 hardware, and has been expanded and improved upon heavily. He now functions a lot more like Nemesis from Resident Evil 3 (who himself was an upgraded version of the original Mr. X in many ways). Not only does he just look and sound infinitely more intimidating, his capabilities are also no longer limited by things such as not being able to follow the player through doors- which might sound minuscule, but has a huge impact. And that’s just one example.

Often, people say that Resident Evil 2 is the Terminator 2 to Resident Evil’s Terminator. They say it often because it’s a surprisingly accurate statement. It really does feel like that much of a leap- and it’s no coincidence that Mr. X feels like the series’ own take on the T-1000.

Oh, and he wears a hat. And you can shoot it off his head. And you get a Trophy for it. Which I really like.