Posted By Shubhankar Parijat | On 20th, Oct. 2010 Under Feature, Slider 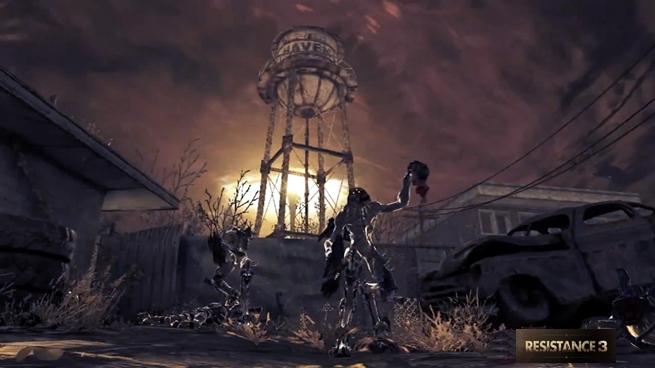 The Resistance series is- to say the least- unremarkable. While it does provide us with games that are always a blast to play through, Resistance games have never been met with universal acclaim or mind-boggling reception. With each next installment, though, the Resistance franchise just seems to get better and better. Resistance 2 improved vastly upon the best-selling Resistance: Fall of Man, while Resistance: Retribution, in spite of being the game that was on the least powerful system, provided everything a PSP shooter needed to have to be respectfully good.
But in spite of the consistent rise in quality, the Resistance franchise isn’t half as successful or iconic as some of the other franchises that were incepted this generation- Gears of War, Bioshock, Mass Effect and the like. Even Sony’s own first-person shooter, released back in 09, Killzone 2, was much more polished and refined than any of the Resistance titles released till yet.
But just wait- stop. A franchise that has been so good consistently has to have a good day at the office, doesn’t it? Especially considering the fact that it comes from the developers of the superb Ratchet and Clank games, the next installment in this under appreciated franchise, Resistance 3, has to be the one that will engrave the name of Resistance into the hearts of all contemporary gamers- and others as well.
But what can Resistance 3 do that other shooters haven’t? There is practically nothing left in the genre that hasn’t already been done before. Well, here is what we expect the third installment in the canon franchise of Resistance series to be. We hope you like our article.

Resistance has always had a great caste of characters, and some stand out amongst all, and quite surprisingly, prove to be some of the best characters one can ever come across in a game. Resistance 3 being the final chapter in this epic trilogy, the character caste will have to be gigantic, memorable, and will have to satisfy the needs and the demands of the gamer. Our first demand?

“James Grayson- one. Whatever the hell you are- nil,” says Grayson after blowing up a gigantic mech unit. Grayson is cool. He’s badass, he’s a gun for hire, he’s a killing machine. He wants revenge. He kills every alien he sees, and he blows up entire buildings. He is the modern form of Kratos. A quest for revenge made him do stuff and tread paths no one would dare step on. Yet Grayson had the ability, the attitude, the sheer brute power and the wits to fight his way through hordes upon hordes of strange looking aliens (well, they always look strange, but never this strange).
However, the ending of Resistance: Retribution, the brilliant third person shooter on the PSP, left it quite unclear as to what had finally happened with Grayson. After having been declared “Missing In Action” during a mission to Russia, the last scene of R:R showed James Grayson standing in front of a cathedral, with his eyes glowing yellow, hinting that he too, like Nathan Hale, the main protagonist of the Resistance series, had been infected by the Chimera virus.
The question: will Grayson return in Resistance 3? We say he will, and he will play a negative role, but he will not be with the Chimeran forces. He will be in the no man’s land, interrupting in the Resistance’s missions, for his own selfish purposes- i.e blowing up conversion centers, killing Chimera etc. And we think he will be playable, not just an NPC. Of course, he will have improved, boosted powers, what with him having been infected, which means- no health packs (yay!/no!)!

I know, the great Russian mind is dead, but just think a second- we don’t know that. It was found in Malikov’s journal that he will kill himself, we were never shown his death. This could still mean we are yet to see the last of him. What could his role be? Well, for one, he can create a proper anti-Chimera serum which actually works and doesn’t completely backfire. Other than that? Maybe he can help bring Hale back, so that we don’t have to bear with Capelli, who was recently announced to be the new protagonist of Resistance 3,  for the entire length of the game (he was kind of a prick in R2). We just hope he returns, we want more of Dr. Malikov.

And of course, Nathan Hale

The ending of Resistance 2 left our jaws dropped open (shuts mouth), and it was all because of Hale- Nathan Hale. You know like Bond- James Bond. Yes, Capelli killed Hale at the end of Res2 (that bastard!), but come on, Nathan Hale- we haven’t seen the last of him. Yet. Being the guy that he is, I’m pretty sure he’ll be one of the leading characters in Resistance 3, though I’m not entirely sure he’ll be one of the good guys. If- if– Dr Malikov is still alive, he may create a serum that cures the virus that has infected Hale, which means, he’ll be a good guy again. Either way, I want Nathan Hale as a playable charatcer, and yes, I want him to retain his yellow eyes, no matter where his loyalties lie.

Daedalus, probably one of the best antagonists one can ever come across in any shooter. We want him to return, but you know what would be a twist? If he returns as Private Jordan Adam Sheppard, in human form, and as one of our own kind, fighting against the Chimeran invasion. Of course, Sheppard would have his own personal errands, like avenging his horrible transformation, i.e finding Malikov and killing him (assuming he is still alive, of course). But even if he doesn’t return as a human, he could still just return, even if for a few minutes- because that would be a huge treat to all Resistance fans.