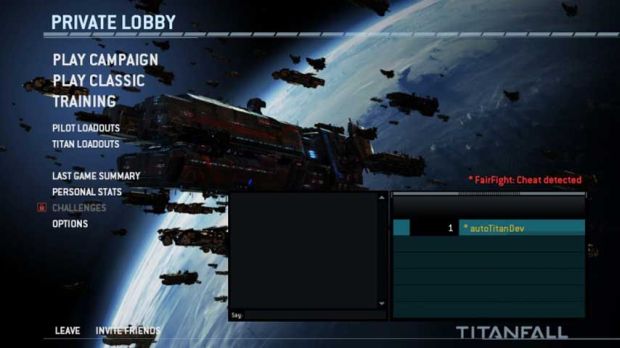 Respawn Entertaiment promised to implement anti-cheat measures for Titanfall, even stating it had monitored cheaters since release and were banning the same. The developer has announced that said measures came into effect on March 21st, with Fairfight using the information gathered since launch to ban cheaters on the PC version.

But it’s not quite a ban. If you head to the lobby screen, you’ll see the phrase “*Fairfight: Cheat Detected” which indicates that you’re not playing by the rules. You’ll then be sent to a server full of said cheaters.

“Great news: you get to keep playing Titanfall! Less-great news: you only get to play with other cheaters. You can play with other banned players in something that will resemble the Wimbledon of aimbot contests. Hopefully the aimbot cheat you paid for really is the best, or these all-cheater matches could be frustrating for you. Good luck,” wrote Respawn, rather cheekily.

Having second thoughts about cheating? Let us know below, along with what you think of Respawn’s anti-cheat measures.