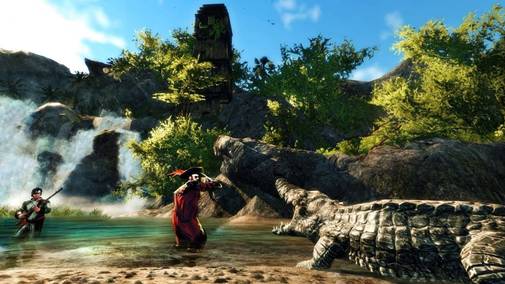 Risen 2: Dark Waters, and that the game is now available for pre-order at all major retailers and online.

Developed by Piranha Bytes, Risen 2: Dark Waters takes place several years after the end of the original Risen, when humanity is pushed to the brink of existence and one of the only safe havens is Caldera, a city located on the peninsula of the Lost Realm. However, even this sanctuary is threatened by the world at chaos, as monstrous sea monsters cause shipments of vital supplies to come to a grinding halt. The hero, upon discovering a rumor that the pirates of the Southern islands know of a way to banish the creatures of the deep, journeys to infiltrate their ranks and attempt to acquire this knowledge in time to save Caldera from imminent peril.

Deep Silver will release Risen 2: Dark Waters for the Xbox 360 and PlayStation 3 system on May 22, 2012 in the USA and Canada and April 27 for Windows PC.