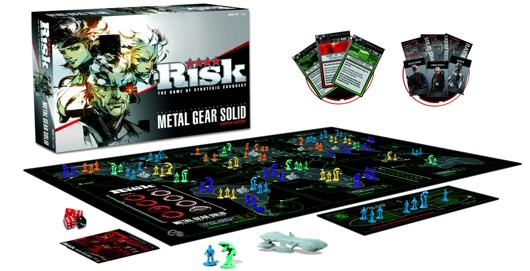 Are the kind of person who likes to be a bit more physical with their entertainment? Would perhaps like to slash the computer part off computer games, but still play with your favourite franchises? Well, luckily for you there is Risk: Metal Gear Solid. The game is based on a variation of the 2008 revised Risk rules and features five private military companies vying for dominance.

The game board consists of the standard six zones and 42 territories, along with an Outer Haven battleship addition. There are also 275 custom plastic pieces representing the 5 military companies, neutral armies and cities; 8 Boss Cards, 40 Drebin’s Cards, 42 Territory Cards and 8 Rewards that can be earned.

The game will be available, exclusively, through USAopoly.com. No launch date has been announced but a presale will begin on the 3rd of October at $50.