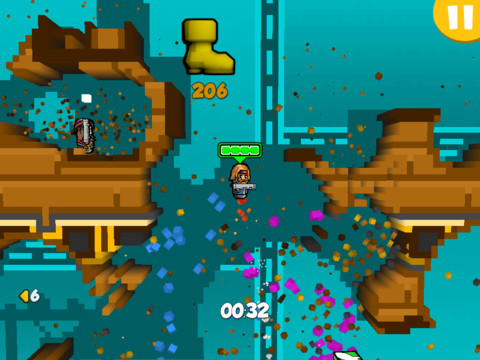 Rocket Riot is one of the most engrossing iOS games I’ve played this year. It has a unique old school 8-bit pixel visual style, which really adds a lot to the atmosphere. You can pretty much destroy everything you see in level. The main premise is really simple, after watching an uneventful comic styled cutscene, you are thrown in a level equipped with a Rocket Launcher and it’s up to you to do the needful based on the objectives that are given to you.

You fly around the level using a jetpack, and I love jetpacks! It’s a dual stick shooter, so you know what to expect here. There a few minor annoyances as getting stuck in the debris you create, but overall the controls are great. I wouldn’t be saying this if I didn’t play this game for a long time. It’s addictive in a weird sort of way. As mentioned above, the destruction mechanics are fantastic, as you can destroy everything and it fills the screen with little blocks making it really fun to watch. The in-game music is quite hummable as well.

You can play as a generic pirate or choose from 150 different characters, which add nothing to the game plot wise. Of course, they need to be unlocked first. You must be wondering, “If the entire level is destroyed, where’s the challenge in navigation?” Well, the levels regenerate after a while, so you don’t have to worry about the destruction part in the game. It’s a Chillingo game, so there should be plenty of levels for you to play with, and at the end of the game your performance is rated using three rockets. If you have played Angry Birds, this should be familiar. 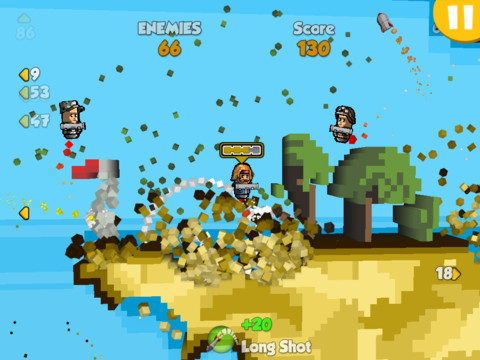 There are 48 levels in the game, and they offer you four types of objectives. One is to destroy every enemy you see, which is really easy because they have this arrow near them which tells you how far they are. You can also play Rugby in the game, by capturing the ball and scoring it in the goal post. It’s not that easy though as if you get hit, you will drop the ball, so it can get a little frustrating. There is also destroying the golden boots gametype, where you have to… destroy the golden boots. It’s fairly simple to do. Then you also get to fight with a boss after clearing a few levels. These aren’t easy as the bosses throw the entire kitchen sink at you.

Once you beat a boss, you will notice that your movement is much faster than before. So, there you go for another round. There are also numerous weapon pickups scattered across the levels, which you give some impressive firepower. For shooting, you have to keep flicking the finger in the lower right screen of the iOS device, and it works fairly well. I haven’t encountered many problems with the aiming in this game. You can also unlock all sort of achievements in the game, which reward you based on the skill moves you perform, so it’s a nice touch.

The game is available for $0.99, and considering the amount of content available here, along with the co-op and multiplayer modes, I’d say this game is a complete value for money. The game is fun to play and if you love games such as Geometry Wars, it’s is highly recommended.

Controlling the character can feel a little off. Limited gametypes.

Final Verdict:
SUPERB
The game is available for $0.99, and considering the amount of content available here, along with the co-op and multiplayer modes, I'd say this game is a complete value for money. The game is fun to play and if you love games such as Geometry Wars, it's is highly recommended.
A copy of this game was provided by Developer/Publisher/Distributor/PR Agency for review purposes. Click here to know more about our Reviews Policy.