Another day, another brightly colored free to play game vying for our attention. It’s true that this new competitive roller-derby-basketball hybrid doesn’t make the most unique first impression. Well past the introduction, tutorial and even into the first match, I found myself mostly just wondering what exactly is there about this game that gives it a reason to exist. Then after my opponent’s team scored, it clicked. I got a rush of competitive energy, gripped my DualSense controller a little harder, and started playing more aggressively.

"The redundant arenas, lack of strategic depth, and the sometimes very drawn-out matches going well into overtime started to drag on the experience immensely and I couldn’t shake the feeling that the game just had nothing left to show me after about an hour or so of playing it."

Soon my team was cooperating. Slip-streaming past each other, keeping the ball moving forward way ahead of our opponents, banking laps, and scoring big points. Sometimes I would even mix things up and start going the opposite way of my team to play a little defense by griefing the other team with head-on tackles. Before I knew it, I was having a blast. I was getting better at the game, managing my speed and momentum, taking shots at the other team when necessary, and evading them when they tried to do the same to me. Then, as quickly and mysteriously as the fun arrived, it was almost entirely gone. The redundant arenas, lack of strategic depth, and the sometimes very drawn-out matches going well into overtime started to drag on the experience immensely and I couldn’t shake the feeling that the game just had nothing left to show me after about an hour or so of playing it.

That’s not to say there’s anything wrong with games that are best enjoyed in short bursts. Perhaps, at the end of the day, that is what Roller Champions is; a game that will sort of connect with a lot of people for a short while, and only create long-term sparks for a somewhat niche audience, perhaps building upon that later with future expansions. Nothing wrong with that in theory, but given there’s about 50 other games that more-or-less do the same thing and are more-or-less fighting over the same sorts of gamers, I worry about Roller Champions’ odds.

The game is pretty simple – perhaps to a fault. You gain possession of the ball, run laps, score goals, and pass to other teammates and slip stream ahead of them as needed. The goal area isn’t horizontal like basketball, but rather, it resembles the vertical hoops of ancient Mesoamerican ballgame Ulama which is a pretty cool inspiration if that’s where it comes from. There is some depth to it too in that you don’t have to stick with your team, you can tackle and/or uppercut opponents to knock them out of the equation for a few seconds, and there is some simple momentum to manage as you veer around on the slopes of the arena. None of these elements are particularly open to interpretation though. 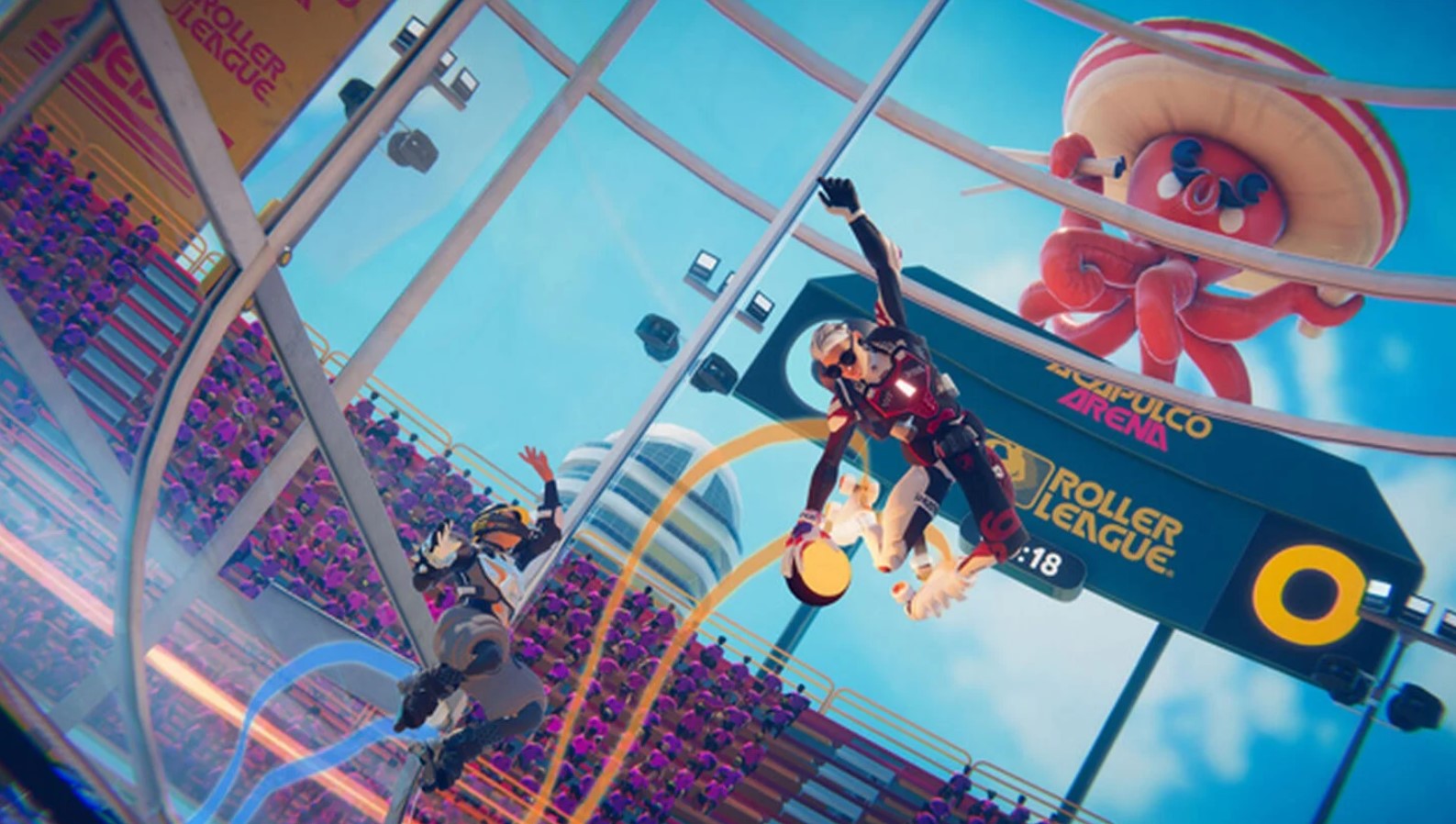 "Given there’s about 50 other games that more-or-less do the same thing and are more-or-less fighting over the same sorts of gamers, I worry about Roller Champions’ odds."

In fact, there’s only a couple different ways to approach any single part of Roller Champions’ gameplay. And you’re either on the team that does them the best or you’re not. There is one wild card factor that can flip the table at any time though, and it’s that the more laps of the arena you bank while in possession of the ball, the more points you earn if you do eventually score with it. This can theoretically lead to a stunning upset at the end of virtually any match as long as somebody can maneuver their way into doing it. The couple times I was able to take charge and flip a game at the last second in this way have easily been my most thrilling moments playing it so far – and for that thrill alone, I’d say Roller Champions is worth a shot. Especially for those who have found themselves enjoying Rocket League or Knockout City.

Unfortunately, though, unlike those two games, Roller Champions doesn’t have much left to offer you once you’ve seen the top of the mountain. The few arenas in the game only vary in appearance and offer basically no variety for the gameplay itself. The small handful of moves at your disposal can only be used in one or two ways, and the progression is a bit too slow and tedious for how fast its core gameplay can lose steam. Had I been unlocking new emotes and outfits at a quicker pace, that might have kept me enthusiastically engaged a little longer. For this particular game, earning more wheels to buy stuff feels more like a carrot dangling in front of a treadmill than it probably should. Rollerblading around in the arenas does feel pretty good most of the time all-in-all. While some inclines can deplete your momentum a bit faster than feels natural, when you do get going on a tear and blow past the crowd or evade a tackle attempt, it feels just right. Just speedy and rewarding enough to make me feel like I’m doing a good job, but not so much that I ever feel like I’m untouchable.

The visual tone and overall presentation of Roller Champions is one that you’ve almost certainly seen done exactly the same way plenty times this year, if not this month. It makes the game look more dime-a-dozen than it really is, and with an absurdly corny announcer and a predictable suite of licensed pop music the game gives off a pretty thick “Hello there, fellow kids” vibe that also isn’t doing it any favors. Still, there are reasons why this presentation is so popular. Game’s that carry themselves this way do grab your attention in those initial first impression moments, for better or for worse, and given its inherently simple design, it does run very well on the PS5 and I reckon it won’t have any issues running on whatever you end up playing it on. 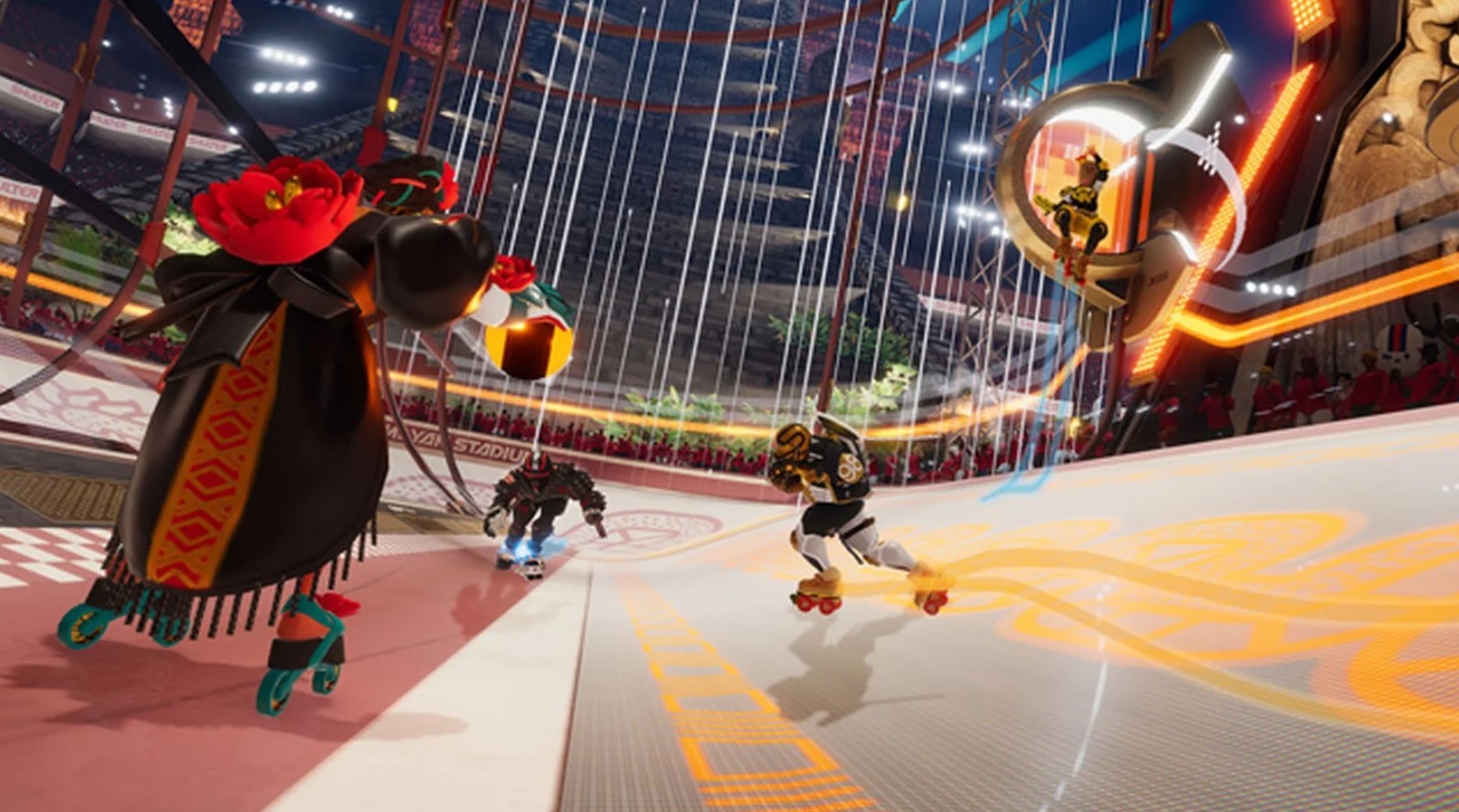 "The visual tone and overall presentation of Roller Champions is one that you’ve almost certainly seen done exactly the same way plenty times this year, if not this month."

All in all, I think the foundation that the developer has created with Roller Champions is an above average one. I could definitely see a small hardcore audience forming around it. But the biggest crime it commits is that it stops short of doing much of anything else. Even for a free to play game, even for a new free to play game, this game just feels barebones. If it’s something you think looks interesting, you’ve got literally no reason to not give it a try, and if you’re interested in it enough to read this review, you’ll probably like what you find in it. But among such a vast array of similar games with already established communities, better selections of modes, more gameplay variety and more tactical depth, I don’t quite see where this game fits in yet – especially long term. Hopefully the developer can really give this game the variety it deserves to build a more compelling package on top of this well-laid foundation, but as it is, it’s a fair game, held back by being simply underdeveloped.

Uninspired aesthetic across the board; Significant lack of modes, moves, and arena variety.

Final Verdict:
FAIR
Roller Champions loses its momentum too fast, but provides great bursts of genuine fun along the way.
This is a free-to-play game downloaded by the author for the purposes of this review. Click here to know more about our Reviews Policy.