Roundabout is a puzzle game in which players need to drive passengers in a constantly revolving limousine to their destinations. The game also features challenges for players to compete in, search collectibles, customize their property and of course their limousine.

GamingBolt recently caught up with No Goblin’s co-founder Dan Teasdale to know more about this fun filled title.

To begin, can you please let us know about yourself and No Goblin?

Sure thing! My name is Dan Teasdale, and I’m a cofounder at No Goblin. Along with my cofounder, Panzer, No Goblin’s mission is to make unique mechanic driven games like Roundabout. We’re both ex AAA designers who’ve worked on games like Rock Band, The Gunstringer and Destroy All Humans!

Roundabout looks like it’s targeted for casual gamers. So tell us what was your inspiration behind developing such a crazy (in a good way) title?

I think it’s pretty depressing that “colorful” and “funny” are a synonym for “casual”. We want our games to be accessible and fun to everyone. I’m really happy that with Roundabout, we’ve made a game that both “casual” and “hardcore” people can enjoy in different ways.

If you’re jumping into Roundabout and just want to experience our ’70s world, we’ve made the entry curve and accessibility work so that you’ll never be stuck. If you’re a hardcore Pro MLG gamer, we have a bunch of extended mechanics like our Official eSports Speedrun Mode and our “Driver’s Report” system on missions to make things an intense challenge.

"We've been pretty happy so far with how pro eSports gamers have taken to Roundabout on Steam. Waking up and seeing an active speedrun community fight for the #1 slot has been fantastic, and getting the endorsement of both Team GFB and Pro YoCo's Medibot has given us a great boost in terms of the respect that Roundabout gets as an eSport."

To continue my question, do you think Roundabout will appeal to the hardcore gaming market?

We’ve been pretty happy so far with how pro eSports gamers have taken to Roundabout on Steam. Waking up and seeing an active speedrun community fight for the #1 slot has been fantastic, and getting the endorsement of both Team GFB and Pro YoCo’s Medibot has given us a great boost in terms of the respect that Roundabout gets as an eSport. Hopefully you’ll see us at a GDQ event soon!

So what is the player’s objective in the game and how do you plan to make the game replayable?

Roundabout is a ’70s BMovie game where you play as a constantly revolving limousine. You have to navigate this constantly twirling limo through the open world of Roundabout to pick up passengers, find secret stashes, pull off sick jumps, and more. Since the framing of our spinning mechanic is “open world”, we have a bunch of great side mission, exploration and leaderboard competition options in the game for people to mess around with once they’ve finished the main story.

The title describes itself as a 70s BMovie game, how does that relate to the gameplay?

Roundabout is set in 1977, and we’ve tried to get that late ’70s feeling through everything in the game: our passengers, our printthemed UI, our music, you name it. This is all tied together with our passengers, which we filmed in the back of fake limousine and treated to look like a highdefinition version of ’70s footage.

"Saying that the PS4 is "more powerful" than the Xbox One or vice versa as a blanket statement is really misrepresenting how games work."

Roundabout includes cutting edge full motion video technology that allows real actors in the back seat. Can you tell us about how this idea came about?

Before No Goblin, I was mentored in the ways of Full Motion Video by acclaimed FMV director Josh Bear. I tried to get it out of my system when we started Roundabout, but alas, instead we produced an 87 page screenplay and tens of hours of raw video.

Are you guys considering on making “Dynamic Themes” and “Avatar Pictures” for the PS4 and Vita?

No promises, but it’s definitely something we’re looking into. Both Panzer and I are suckers for great platform features that let you personalize your console or your system.

With the advent of new consoles there is always that excitement among developers. Now that you are about to ship your game on PS4 and Xbox One, are you still excited by their potential?

I’m always excited to release games on console! I think the TV experience is something that’s huge and incredibly unique to consoles, so being able to release a TVfriendly game like Roundabout on that hardware is super exciting.

What’s your take on the differences between Xbox One and PlayStation 4?

Saying that the PS4 is “more powerful” than the Xbox One or vice versa as a blanket statement is really misrepresenting how games work.

At the end of the day, it doesn’t matter. Both platforms are in the same relative ballpark, so the real work for releasing is getting your game certification ready on each platform instead of crazy optimizations on one specific platform.

Which console did you found easier to achieve 1080p and 60fps on? 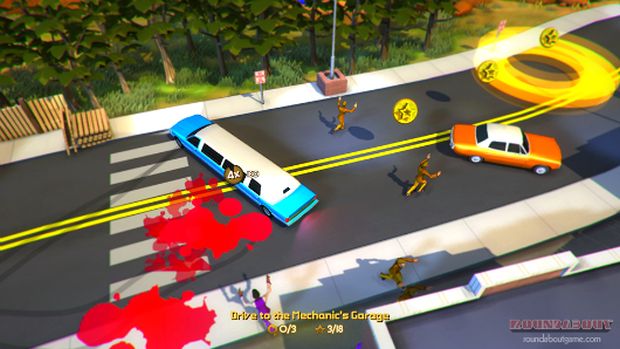 "Most of the remastered versions I've seen have been from groups or teams dedicated to that work rather than the original team. Studios like Bluepoint really need to get more credit for the incredible work they've done on remastering games."

What are your thoughts on Xbox One’s June SDK update?

Microsoft has been nailing it with the recent XDK updates. Obviously I can’t talk details because that would be a breach of NDA, but it’s been fantastic to see both the Unity and Xbox teams respond directly to the things that we’ve needed to ship Roundabout easily on Xbox One.

There has been a lot of debate regarding the remastered versions. Do you think developers should make new games instead of remastering older games for the PS4 and Xbox One?

Most of the remastered versions I’ve seen have been from groups or teams dedicated to that work rather than the original team. Studios like Bluepoint really need to get more credit for the incredible work they’ve done on remastering games. In reality, we’re getting the best of all worlds: New games are being made, AND remastered games are being released by new teams, AND the money from those remastered games is allowing those new teams to fund brand new games in the future.

Roundabout is out now on the Steam and Humble Store, and we’ll be coming to the PlayStation 4, PS Vita and Xbox One early next year. If you love fun games, halfdecent acting and plastic skeletons, go to roundaboutgame.com to find out more.