The Rude Gameware’s Fierce 3500 Wireless gaming mouse is essentially the v.2 version of the wired mouse only it is wireless.  While the v.2 wired version is nearly identical to the Fierce 3500 version as far as the look and layout, this can be looked at as a good thing considering that the v.2 is a quality gaming mouse.  The mouse is a little bit larger than I would prefer but it is very comfortable with nice rubber contours on the left and right of it.  Perhaps the bright side of it being slightly larger is the perfect placement of the right and left main buttons, making it perfectly clear which one you are pressing without looking, with much ease adding to the flow.

The wireless version compared to the v.2 has no groovy fluorescent lighting on top of it, but most importantly it does not have the weight system that the v.2 wired one does.  For those of you who are unaware, people that are serious about their mice like them to have an exact weight, so the the v.2 had a slide out container that you could make heavier or lighter by taking small weights in and out of the mouse.  I really hate to compare to mouse to any other one, especially the wired version of the 3500 but when it comes to hardcore gaming, it is not easy to get away with taking a slightly major feature away from a mouse.  In all honesty though we have to be real and understand that gamers that are hardcore enough to care about that, would never use a wireless mouse to begin with.

Now when it comes to the software for the mouse you can control everything from the button assignments to the acceleration, scroll wheel speed, double click speed and of course the DPI.  So it has pretty much everything that the wired version has and even looks prettier.  The most important thing I want to state about this mouse is that although wireless, it is not a Bluetooth mouse.  It’s actually a 2.4 GHz wireless mouse, which is the same thing as let’s say your TV remote control.  Now initially I thought that this would be a bad thing and it would not be up to par with a wireless Bluetooth mouse, but I could not have been more wrong. 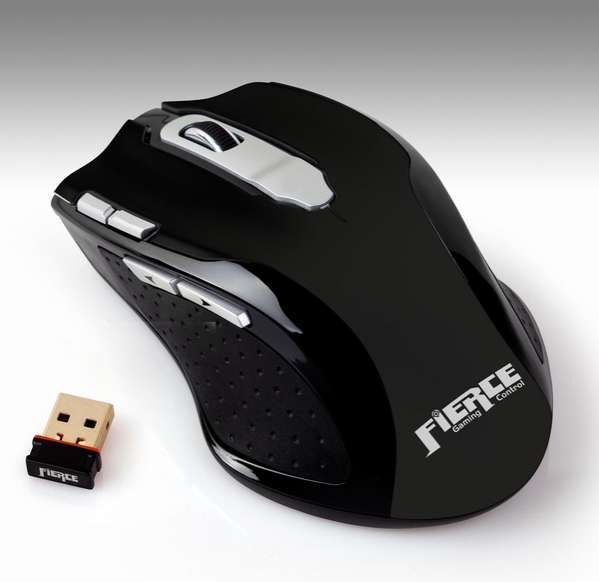 With this unique 2.4GHz connection it has high speed motion detection with 30 inches per second, an ultra high sampling rate, extremely fast polling rate as well as response time and it has very quick wake time from your computer, that is faster than some Bluetooth mouses I have used.  This is all good and surprising at the same time, however you are still forced to use the nano receiver, which although so small, it is almost unnoticeable, it does take up a USB slot, which is the down side.

Other features the mouse has is its obvious 3500 DPI Engine, an on-board memory to save your modifications, zero-acoustic smooth Teflon feet, low power architecture.  It also has on the fly sensitivity DPI adjustment with no need to add a driver, LED, DPI Indicator and a Smart Surface Analyzer.  The Teflon feet combined with the surface analyzer really help when it comes to moving the mouse around with flawless, smooth movement.  Not to mention, it also comes with replaceable Teflon feet if needed.  The 3500 has an automatic power saving mode and as previously mentioned, super quick wake up time.

There are independently programmable buttons which is great as the more buttons to program the better.  Especially being able to program the click button as well as the wheel.  You can also give the buttons Macro controls with is very important when it comes to a gaming mouse.  You can program a combination of keys to a button to a single key configuration and a multi-fire function which can all be saved.  The one issue i did have was that while the two side button were fairly easy to access the upper two seemed to be out of the way and harder to quickly get access to when those mili-seconds matter in gaming.

Good wireless mouse that has great programmable software for the buttons, giving you a wide range of customization.

Although wireless, it is not bluetooth compatible, meaning you MUST use up a USB port for the 2.4GHz wireless adapter. Although VERY TINY.. it still takes up a USB port. Battery life also seems to not last that long even with its automated sleep mode.

Final Verdict:
GOOD
Excellent Gaming mouse that has a 2.4GHz wireless connection that does not let down.
A copy of this game was provided by Developer/Publisher/Distributor/PR Agency for review purposes. Click here to know more about our Reviews Policy.