“Something’s about to hatch” 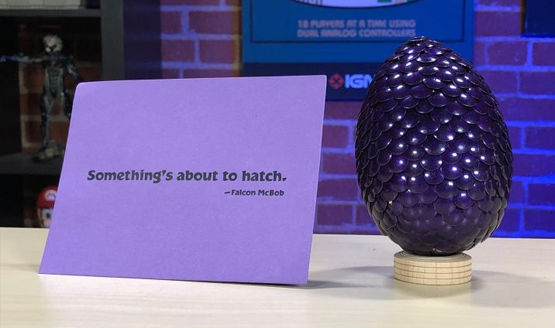 Ever since the reveal of the Crash N.Sane Trilogy, the rumour mill has been churning about whether or not the other PS1 superstar, Spyro the Dragon, was set to receive the same remaster treatment as the crazed marsupial. A package recently arrived at the IGN offices that might contain the first real, concrete suggestion that it’s actually happening.

The story starts a while back, when a few months back the @SpyrotheDragon Twitter account, previously owned by a series fan, changed hands mysteriously, was made private, and changed the name attached to ‘Falcon McBob’. Now, the package IGN received contained two items. The first is a scaly, purple egg that looks more than a little reminiscent of a dragon. The second is a card, which simply says “Something’s about to hatch,”, and is attributed to this same Falcon McBob.

The story goes even deeper, with a Reddit user apparently tracing the return address right back to the owners of both the Crash and Spyro IP, Activision Blizzard. Are we about to see another grand PS1 return at this years E3, much like we saw with Crash? Time will tell. Let us know how hyped you are in the comments below.