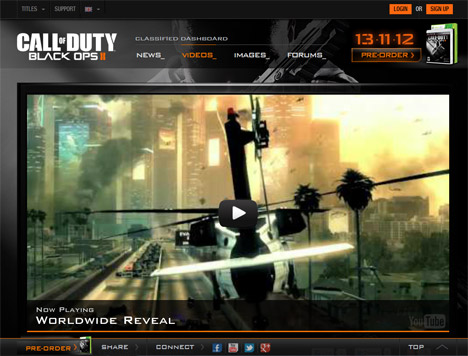 According to images posted on Call of Duty: Black Ops 2’s official website, which went live ahead of the game’s reveal later today, the game will be set in a futuristic setting during the later years of the 21st century against a backdrop of another Cold War, and a war ravaged city that looks a lot like Los Angeles.

The website says the game will push “the boundaries of what fans have come to expect from the record-setting entertainment franchise” and that it “propels players into a near future, 21st Century Cold War, where technology and weapons have converged to create a new generation of warfare.”

The image posted above shows a helicopter flying over the war ravaged skyline of a tattered city (probably LA). The trailer from which that photo has been snapped will be revealed later today during the basketball playoffs. So stay tuned.

Call of Duty: Black Ops 2’s box art also got revealed recently. Have a look at it here.

BLOPS 2 releases on November 13 (release date unconfirmed) for the Xbox 360, PS3 and PC.