Since 2018 Rust has been giving players a special experience; an online hardcore survival sim with the essence of Minecraft built in. You start off with nothing and (hopefully) work your way up with guns, armor, and a heavily fortified base. This system has led to some truly memorable experiences and brought unique players from different corners of gaming together into a truly special community over the last few years, and now it’s time to see how that will translate to console. While only time will truly tell on how well Rust lands with console players and how sticky the experience ultimately becomes in a different ecosystem, the good news is that Rust’s console edition does have the fundamentals in place from the PC experience to give it a pretty good shot at garnering a similar fanbase.

You wouldn’t be blamed for being a bit weary of seeing a game like Rust launch on consoles, especially last gen consoles as this version is a PS4 and Xbox One edition of the game and not specifically optimized for current gen hardware yet. But despite the experience being notably less populated with the options that the PC version currently enjoys, the core of what makes Rust a compelling survival game are present on PS4 at least. That’s the version I was able to play for this review, and outside of the handful of little bugs and glitches you would generally expect from a game like this, Rust runs well and feels about as good as one would expect on the DualShock 4. Using R2 to attack, L2 to aim, square to interact, X to jump all make perfect sense for a game like this and while it never quite feels like a game that really belongs on console, it does more than pass as a totally serviceable console version.

That said, the movement of most actions in Rust, I’ll admit, do come off as a bit clunky, especially at first, but once I got my arms around how movement and interacting with the environment is supposed to feel, it made more sense. Rust isn’t really a game that’s ever been about pinpoint accuracy, but rather, it’s more about giving its players a fun sandbox of tools and ingredients that give you a choice between trying to establish a team of like-minded individuals, going it alone, or just being a griefer extraordinaire. Most players will probably find themselves some sort of mix of the three. Often fights between 2 or 3 rock-welding newbies will devolve into a chaotic mess of everybody running around each other while holding R2 and hoping to come out on top, and if that were in any other game it might feel like a flaw, but in Rust it somehow feels right. I would have liked to have seen a few more things be more console-ized though. For instance, needing to hold down L2 and then press x to simply drop an item could have just as easily been mapped to a simple press of L2. Multiple button interactions on PC makes more sense since you’re playing with a keyboard but on console, the less the button interactions, the better. 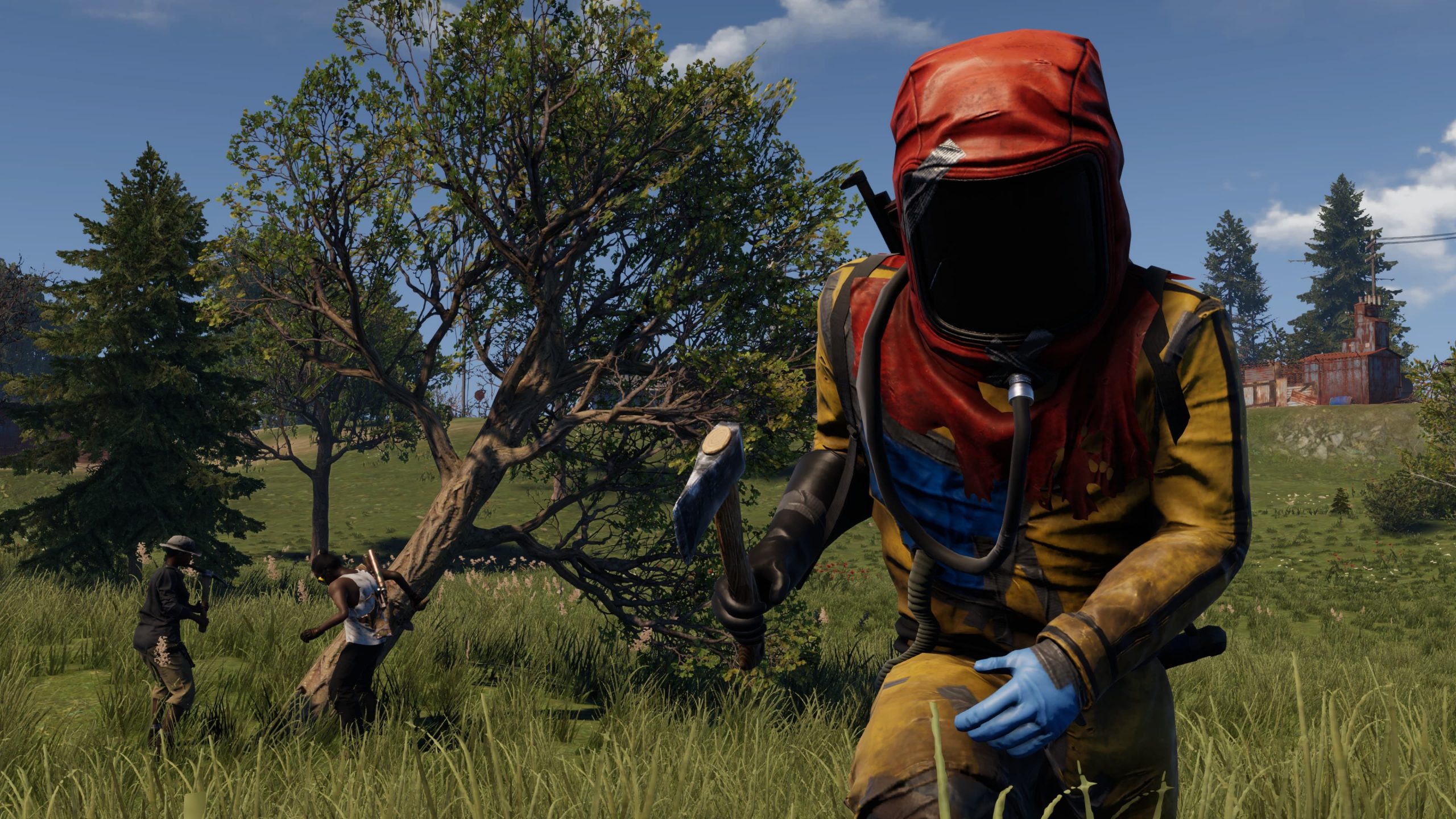 "While only time will truly tell on how well Rust lands with console players and how sticky the experience ultimately becomes in a different ecosystem, the good news is that Rust’s console edition does have the fundamentals in place from the PC experience to give it a pretty good shot at garnering a similar fanbase."

Of course, those with rocks and torches will be the least of your worries once you come across Rust’s more advanced players. After playing on any somewhat populated server, it will eventually dawn on you that not everybody playing the game is new to it, as they’ve already acquired far more advanced weaponry and have far more of a handle on how everything works. Your best bet is to probably go it alone for a bit until you can at least get a spear or a bow together and adequately defend yourself. But there’s no shame in going for it with a crouching sneak attack either. Taking out a heavily armed guy might be a bit of a long shot at first, but it is possible and can also be quite a shortcut to getting yourself a competitive edge. Decisions like this are the core of what makes Rust fun – and they are fully intact in this version.

Rust’s console edition, despite being generally well-done, does have a handful of issues that will probably persist through launch that the developer Double Eleven says they are aware of and plan on fixing soon. Some noticeably jittery movement of other players, players walking through certain objects, players being randomly kicked, and some privacy settings in voice chat not being honored are among these issues. You also can’t create your own game just yet, although the option is listed on the main menu so hopefully that comes along soon. I personally rarely noticed examples of the known bugs, but Double Eleven says they are aware of them and they are toiling away on fixes as we speak. An aim-assist is also supposedly in the works, so given a bit of time and more feedback from players, there’s plenty of good reason to suspect Rust will continue to improve from its already generally decent performance.

Given that Rust is an online-focused game, it shouldn’t be a surprise that the game features console cross play. It does not include PC players, but those on their Xbox Ones and PS4s can play together. This is not only a consumer-friendly approach that should be acknowledged for that alone, but should also help quell the fears of anybody holding off on Rust’s console edition because of their concern for multiplayer longevity. Most multiplayer games will inevitably fade away with time, but having both Microsoft’s and Sony’s players together on the same servers, killing each other and looting each other’s crates and barrels should give Rust a reasonably sustainable lifespan on console. While I would have liked to see everybody – including PC – all on the same servers, I think the combination of these two ecosystems will likely pan out to be a reasonable compromise all things considered. After all, the console edition is technically a separate build of the game from the original version, so including PC players on it may not be possible with how everything is currently structured anyway. 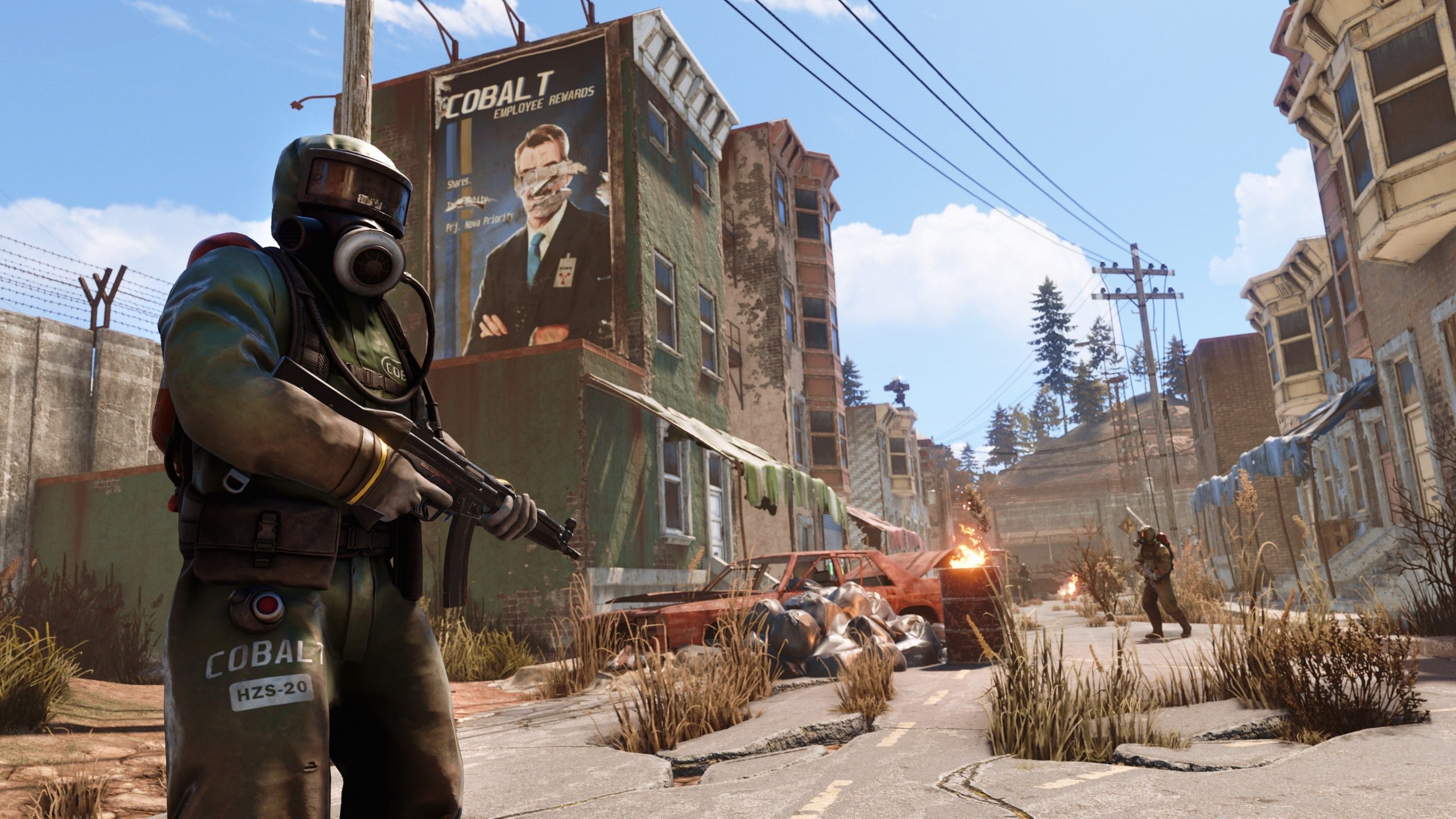 "Those who already have experience with Rust know that to really get anywhere in it, you basically need to treat it like a part-time job. It requires dedication and lots of experience if you want to dominate the landscape in any meaningful way."

Those who already have experience with Rust know that to really get anywhere in it, you basically need to treat it like a part-time job. It requires dedication and lots of experience if you want to dominate the landscape in any meaningful way. That doesn’t mean there aren’t ways to speed the process up and skirt around some of the intended paths of progression, but generally speaking it’s a game that rewards your time spent very slowly. Given this, it might not ultimately end up being the best fit for most console players.

That said, the slow, grindy, and sometimes frustrating experience that is Rust has indeed made a faithful transition to console from the folks of Double Eleven and Facepunch Studios really knowing what they’re doing here. There are certainly some gripes to be had and some legitimate concerns that may prove more or less significant as time goes on, but thankfully the foundation for this new version of Rust is generally a solid one. Anybody who has been waiting to play the game on their console and knows what they’re getting into has little to fear at this point. It’s an easy recommendation for those who understand what Rust is and are ready for that sort of experience. As a game, it’s still easy to see why Rust is a classic, albeit a niche’ one. The survival elements are top-notch and hardcore. As a console port, I’m curious to see what will come of its new audience over the next couple of years, but so far it is impressively well-optimized and tailored for the controller.

Moment to moment gameplay is intriguing as ever; Solid translation of gameplay mechanics from PC to console.

Final Verdict:
GREAT
Rust Console Edition generally maintains its core tenants and starts its console life on the right foot in most areas.
A copy of this game was provided by Developer/Publisher/Distributor/PR Agency for review purposes. Click here to know more about our Reviews Policy.