One of the launch games for the PS5, Sackboy is finally making his PC debut with 3D platformer Sackboy: A Big Adventure. How has the game fared in its journey from consoles to PC?

Throughout gaming history, platformers have had a strange life. Once essentially the most ubiquitous genre on any system, platformers largely fell by the wayside during the turn of the millennium, with the entire genre basically being held up by Mario games on the AAA side of things, and indie titles on the other end of the spectrum. Any other platformer these days is basically relegated to being branded as a children’s game, and Sony’s Sackboy: A Big Adventure, seems to be facing a similar fate.

Originally released as one of the launch titles for the PS5, Sackboy: A Big Adventure didn’t particularly light the world on fire, and that’s largely because as far as being a decent enough platformer, it doesn’t really do much to stand out from among its competition. As for why that is, I’ll get to that, but first, let’s talk about the quality of the PC release.

Sony has proven itself to be on quite an impressive streak when it comes to the PC releases of its first party game. The company and its games have come quite a way from the bugs and performance issues of Horizon Zero Dawn’s PC version on launch, and Sackboy: A Big Adventure is continuing this streak quite well.

"Originally released as one of the launch titles for the PS5, Sackboy: A Big Adventure didn’t particularly light the world on fire, and that’s largely because as far as being a decent enough platformer, it doesn’t really do much to stand out from among its competition."

Sackboy: A Big Adventure offers plenty of graphical options for PC players to fiddle around with to find the settings that work just right for their system. As for our experience, I was able to run the game with everything cranked up as high as it could go—including its ray tracing options—and still enjoy a frame rate of over 60 fps without having to switch on DLSS. For context, I tested the game on a relatively mid-range system: Ryzen 5 3600, 32GB of RAM, and a GeForce RTX 3060 Ti.

And like I mentioned, the game ran like an absolute dream. There were no frame drops, and aside from a tiny amount of stuttering because switching the frame rate limiter option off for a game that’s designed to run at a maximum of 120 fps—something the game warns you about in its settings screen—there were no problems with playing the game whatsoever. Of course, considering the fact that the game’s recommended hardware setup cites a GTX 1060 and a relatively old CPU, I might have essentially just brute-forced our way into good performance on the strength of our more modern hardware.

Now, on to the game itself.

Sackboy: A Big Adventure is a level-based 3D platformer that has you going around clearing levels by jumping and fighting your way through adorable cloth-themed levels, gathering currency, collectibles, and outfits, all in an attempt to stop the big villain Vex from achieving his goals. This isn’t exactly the kind of game where you’re going to find a fulfilling storyline with plot twists and pathos with complex characters with their well-reasoned motivations.

When it comes to actually playing the game, Sackboy: A Big Adventure is a relatively simple platformer; you have a button to jump, one to dodge, one to grab (for enemy tails or other items in a level), and one to attack. There are a few more complicated things you can do with combinations of these buttons—hitting jump right after an attack lets you uppercut—but there’s never a point in the game that actually requires you to learn any of the fancier tricks up your sleeve. You’re not going to find a late-game hard-mode level that puts everything you’ve learned to the test. Even its co-op levels are quite simple, needing the bare minimum of coordination and communication for success. 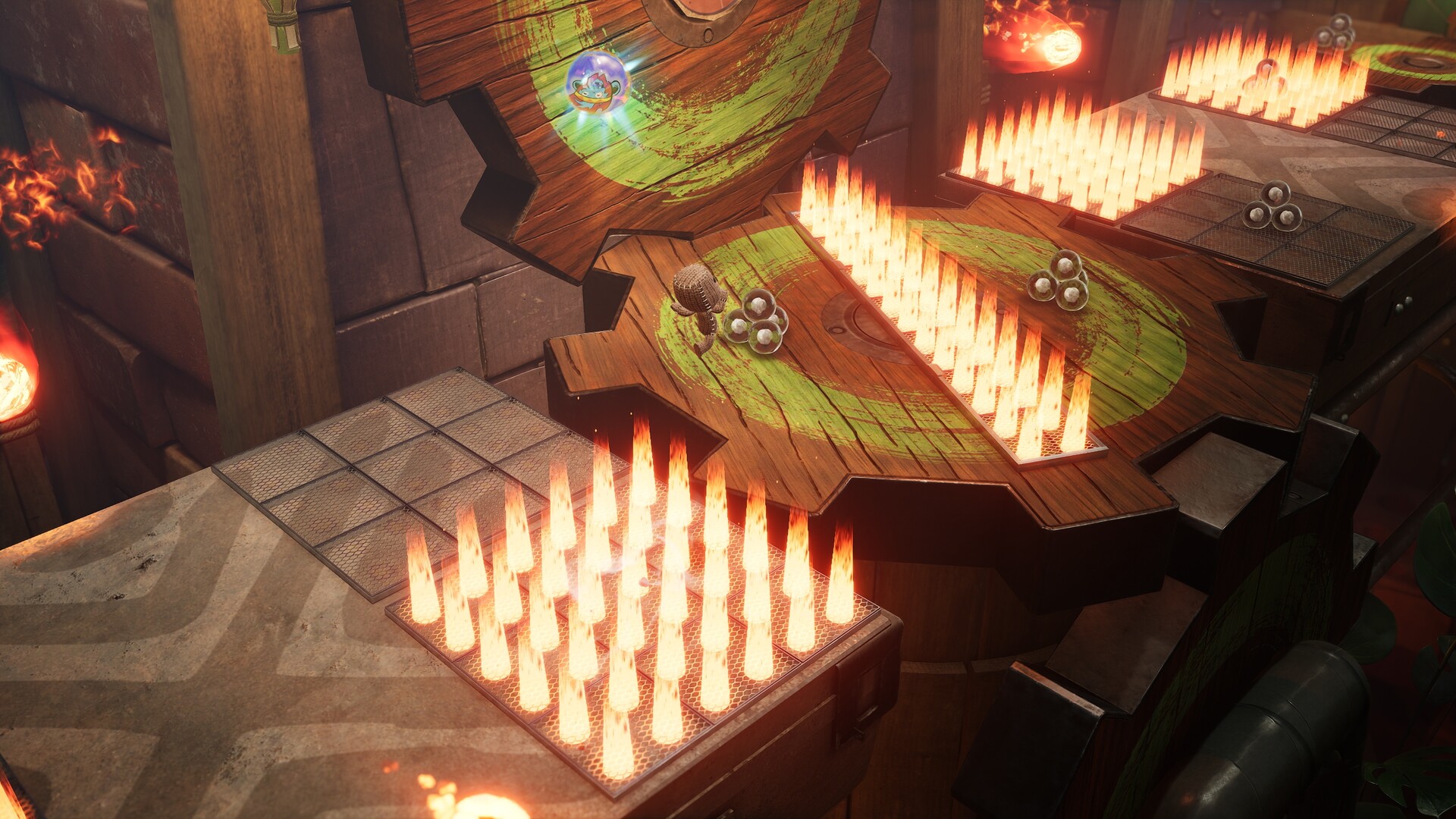 "You’re not going to find a late-game hard-mode level that puts everything you’ve learned to the test. Even its co-op levels are quite simple, needing the bare minimum of coordination and communication for success."

Speaking of which, Sackboy: A Big Adventure supports co-op for up to four players. Along with online multiplayer, the PC release also supports local co-op, assuming you have enough controllers to go around. A big disappointment, however, is the lack of crossplay with the console release of the game. Being able to play it with a friend who already had the PS5 version would have been great. In an age where just about any and every multiplayer game has crossplay, its omission here has not gone without notice.

When it comes to difficulty, Sackboy: A Big Adventure largely follows in the footsteps of its predecessors—the LittleBigPlanet games. Where the three LittleBigPlanet releases augmented their lack of difficulty throughout their story modes with robust creation suites that let players make and share their own levels, Sackboy: A Big Adventure feels like it takes a major step back by lacking similar tools. Would it perhaps have been overly complex to feature level creation tools for a 3D platform game? Probably. But not having these tools in a game starring Sackboy almost feels like sacrilege in a strange way. Our plucky protagonist is essentially defined by his level of customisation and interactivity, after all.

Not everything’s doom and gloom, however, especially when it comes to how the game looks. Sackboy: A Big Adventure has gorgeous visuals. The colour palettes on display are bright and varied, and just about every level has an insane level of playfulness that I really appreciate in my games, especially when they’re meant to be lighthearted romps. I’m not exaggerating when I say that, when it comes to how great everything looks from an art direction perspective, Sackboy: A Big Adventure even rivals heavy hitters in the genre like Super Mario 3D World.

The gorgeous visuals go hand-in-hand with the playful soundtrack in Sackboy: A Big Adventure. Every level has some interesting music to listen to, from the standard cheerful platformer fare you’d expect, to music that sounds downright experimental at times. The teams behind the visuals and audio of the game definitely didn’t slack off.

Far from being a game for everyone, Sackboy: A Big Adventure definitely feels like it was made for kids. While not necessarily a bad thing—what parent wouldn’t love to spend some quality time playing non-violent, bright and cheerful video games with their kids after all—this does mean that it can get quite boring for the more experienced gamers out there. While its levels look fantastic when it comes to visuals, they never really demand any real level of proficiency with the game’s moveset, and even its co-op levels don’t really need much aside from a bare-minimum level of coordination between two players. 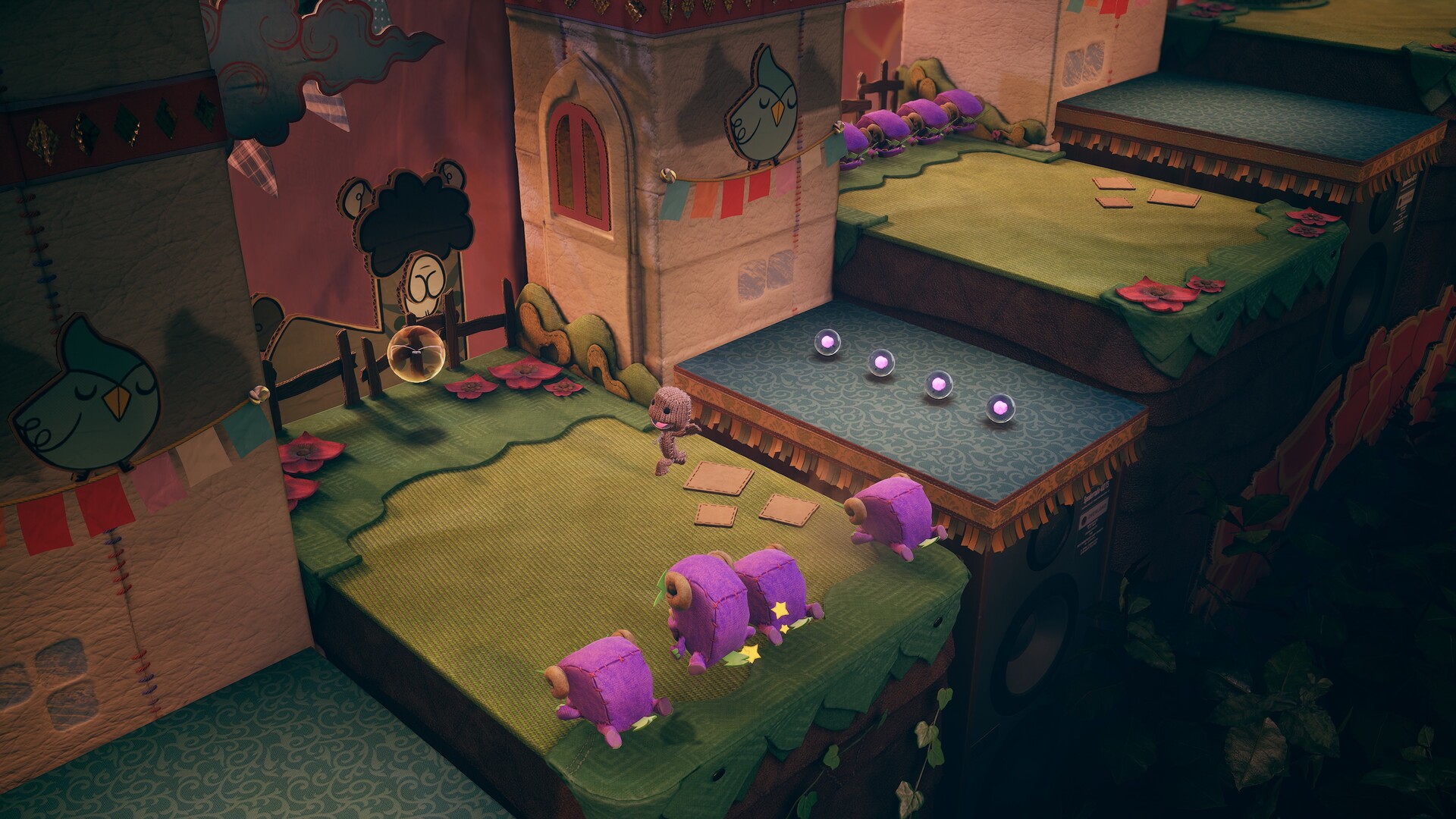 "ackboy: A Big Adventure has gorgeous visuals. The colour palettes on display are bright and varied, and just about every level has an insane level of playfulness that I really appreciate in my games, especially when they’re meant to be lighthearted romps."

Unfortunately, Sackboy: A Big Adventure ultimately feels like a worse platformer than Astro’s Playroom—a game that comes pre-installed on every PS5. While Astro’s Playroom doesn’t offer much in the way of challenging gameplay either, at least that game’s whole point is to show off the PS5’s capabilities. Sackboy: A Big Adventure sadly doesn’t really have that going for it. Rather, it’s an okay game at best. A decent enough platformer for someone who may not own a Nintendo system to play Mario games on, but even on PC, maybe something like A Hat in Time would be a better way to spend your time and money.

Boring; Too easy; No crossplay between PC and PlayStation.

Final Verdict:
FAIR
Sackboy: A Big Adventure, while downright gorgeous and playful, doesn’t really offer anything when it comes to even remotely challenging gameplay. In that aspect, and many others, it feels like a game made distinctly for children. While that’s not entirely a bad thing, there are plenty of other 3D platformers out there with better gameplay and more interesting level design. Even kids can get bored of a game if it’s too easy, after all.
A copy of this game was provided by Developer/Publisher/Distributor/PR Agency for review purposes. Click here to know more about our Reviews Policy.