Loneliness is an emotion most humans can relate to at some point in their lives, and its effects vary in intensity and volume from person to person in a way that makes it unique to the individual. It’s a harrowing feeling to experience, yet it also must exist in order for companionship and love to mean so much to us. German development team, Jo-Mei Games, takes aim to tackle this delicate subject in their new game, Sea of Solitude, in a way that equally highlights desolation and joy; emotional failure and redemption. To say they succeed admirably is a stretch, but Sea of Solitude is nevertheless a compelling narrative-driven adventure worth seeing, even if it’s primarily for its vivid aesthetic and larger-than-life moments.

Sea of Solitude casts players as Kay, a young girl who has seemingly isolated herself from others with her self-centered behavior, leading her to eventually realize she’s now forced to face her demons all alone. Jo-Mei Games uses this depression, anxiety, and fear to create a backdrop for both aesthetics and its gameplay. A vast and lonely city partially devoured by the sea acts as an on-the-nose allegory for solitude. Meanwhile, the game’s cast of characters are primarily huge, jet black monsters that take the form of animals, each of which Kay is actively attempting to return to their human forms so she can help them and redeem herself. It’s all equally wondrous and well-designed, and the focus on metaphors and allegories helps Sea of Solitude justify its existence as an interactive experience even when the actual gameplay doesn’t hold up. 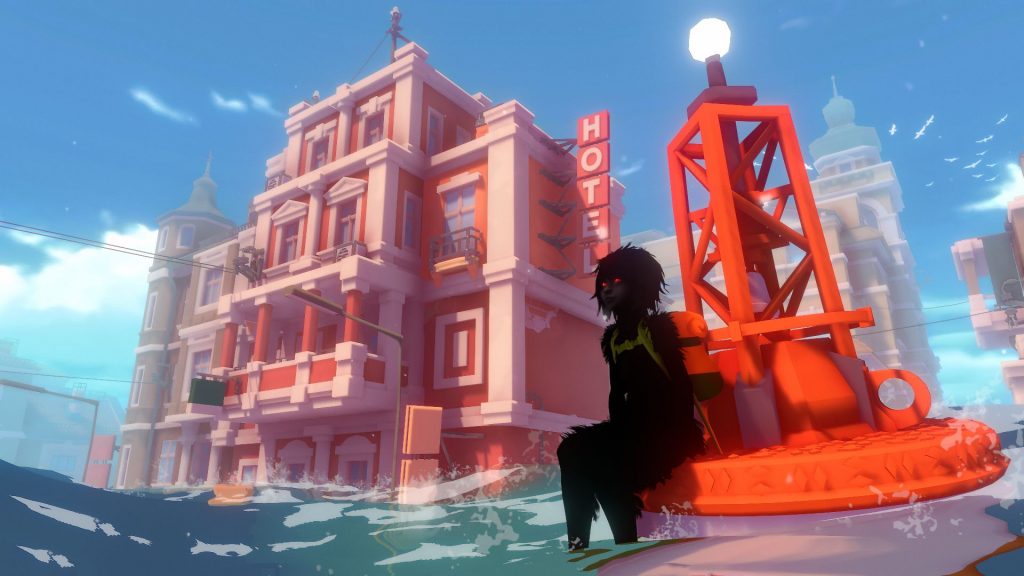 "Sea of Solitude casts players as Kay, a young girl who has seemingly isolated herself from others with her self-centered behavior, leading her to eventually realize she’s now forced to face her demons all alone. Jo-Mei Games uses this depression, anxiety, and fear to create a backdrop for both aesthetics and its gameplay."

Interaction with the game’s world is relatively simple, and the extent of your enjoyment will depend entirely on whether you enjoy games that value narrative over gameplay depth. Sea of Solitude gives you a stunningly gorgeous environment to explore, but said exploration is never fleshed out in any meaningful ways. You’ll walk, run, swim, and drive a small boat around as you move from point to point, occasionally reaching areas that require you to evade enemies or lead them into light sources to destroy them. These “combat” encounters (if you can call them that) are never challenging, and they’re repeated until they’re groan-inducing to endure. But death luckily results in little more than a quick respawn nearby, eliminating at least some of the frustration that can arise from any accidents.

Beyond these encounters, you’ll find a few collectibles to round up. The first is messages in bottles that are scattered around the game’s environments. But unlike many games that offer interesting insight into their characters through expositional collectibles, Sea of Solitude’s messages are short quips that feel inconsequential to both the area found and the story as a whole. They’re perhaps not as inconsequential as the game’s other form of collectibles, however, which take the form of seagulls Kay must shoo away. There’s no reward for finding them and shooing them off, and doing so has absolutely no sense of in-game purpose besides making Kay look like a jerk who hates seagulls.

And it’s a real bummer that the game’s 3-4 hour playtime is dragged down so much by its uneven delivery of story and gameplay considering its premise is so captivating. Each chapter of the story is focused on one of the aforementioned monster animals with whom Kay wants to repair a relationship. The first chapter manages to resonate the most, focusing on a young boy named Sunny who suffers from repeated bullying and feels as though he shouldn’t exist. As you uncover his story and how it relates to Kay, you eventually encounter his animal form, a giant sight to behold that leads to some truly enrapturing cinematic moments. It’s in these moments that Sea of Solitude shows the potential of what it could’ve been if it had been a more focused adventure. 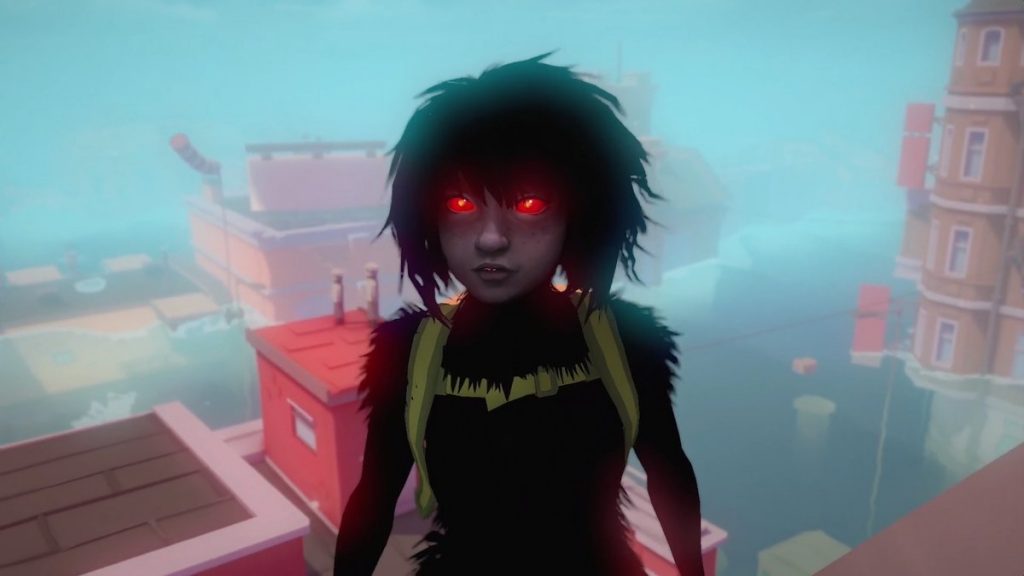 "Making matters worse, the game’s dialogue and acting is astonishingly corny throughout."

However, despite the game’s opening chapter setting promising a fascinating journey, much of Sea of Solitude’s story is simply doled out through awkward background audio. As you walk and swim around the areas in the game, Kay will remember memories of conversations she’s had with someone in the past, yet it rarely relates to what you’re doing on the screen, creating a strange dissonance between gameplay and narrative. A perfect example came in the opening chapter of the game. I found myself forced to evade a cruel monster with razor-sharp teeth that swam in a designated path through the water. I had to feel out the perfect time to swim across to floating objects and buildings or risk being eaten alive. But Kay’s memories of casual conversation were rambling about in the background through some of it, completely removing the anxiety I would’ve otherwise felt when trying to escape a gruesome death. This became a recurring problem as I continued through the game, and despite finding hints of intriguing plot scattered throughout, it all felt too disconnected from my gameplay experience to ever resonate with me the way I wanted it to.

Making matters worse, the game’s dialogue and acting is astonishingly corny throughout. Most of the cast is the kind of slightly amateurish but inoffensive voice acting we’ve all come to expect from narrative-driven independent games. As someone who is fairly forgiving of voice acting in gaming, however, it’s important to me that anyone less forgiving of shortcomings understands: The lead voice actress is among the worst I’ve ever heard. It’s a shame that this unfortunate casting decision plays the biggest part in destroying the necessary sense of weight the story so desperately needs to be effective. 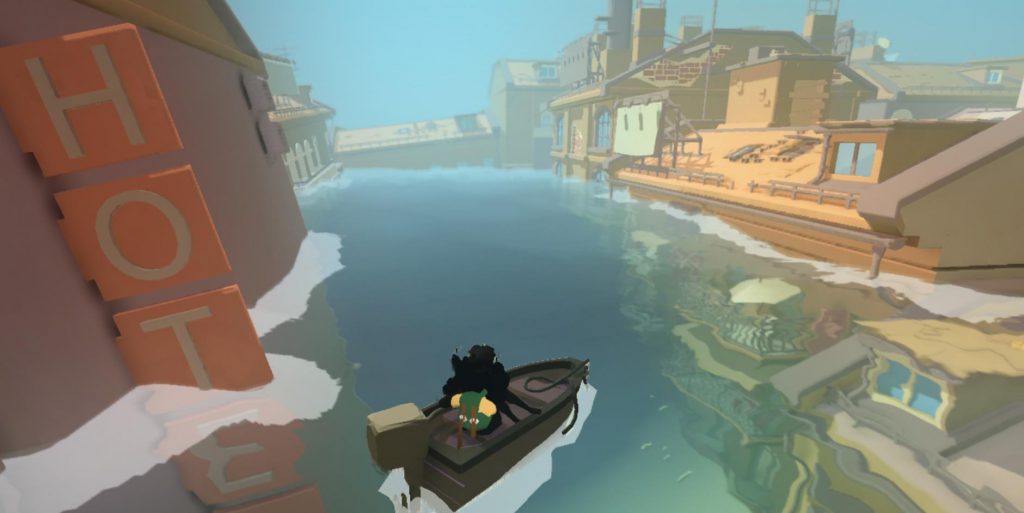 "Maybe with a bit more time and polish, we’ll see a follow-up game from the studio that manages to blossom into something truly exceptional."

Still, despite its below-average voice acting and unexciting gameplay, there was a sense of wonder to  that kept me invested. There’s an underlying message Jo-Mei Games could’ve nailed with more focused execution and a better cast, but as it stands, it’s an uneven experience that still begs to be witnessed for its flashes of narrative brilliance and awe-inspiring moments. Maybe with a bit more time and polish, we’ll see a follow-up game from the studio that manages to blossom into something truly exceptional.

Final Verdict:
FAIR
Sea of Solitude isn’t a bad game, but it’s one that could’ve been far more profound if it handled its delicate subject matter with more care. There’s an engaging story to be told, but all of its compelling narrative ideas are constantly undermined by its cringe-inducing voice acting and bad dialogue. Meanwhile, gameplay suffers from a general lack of things to do or discover in its beautiful world, leaving players with a sense of fatigue as the game wears on.
A copy of this game was provided by Developer/Publisher/Distributor/PR Agency for review purposes. Click here to know more about our Reviews Policy.