Sea of Thieves Tech Analysis: Xbox One X vs Xbox One Graphics Comparison

Head to head comparison between both console versions of Sea of Thieves.

The primary reason why Sea of Thieves’ water effects work so brilliantly is because it’s completely dynamic in nature and it will automatically adjust itself by considering various factors such as the weight of the ship, time of the day, direction of the wind and the way your ship is sailing. Heck, even your character moves along in a realistic manner in the water according to wave intensity.

The water, as expected, uses a full physical based rendering pipeline so the light falling on it reacts dynamically according to the source’s intensity. So when it rains or if there is a storm incoming, expect the sea and your ship to both get affected in relation to what is happening in the environment. The beautiful thing about all of this is that it is completely dynamic in nature. If you crash, your ship will get damaged and will start to sink. In fact the game will indicate you where this damage is if you decide to search and water will start pouring in dynamically and fill your ship, unless you repair it in time.

And once the ship starts sinking, it sinks according to its weight. For example, bigger ships will sink faster to due to their weight whereas smaller ships will take a bit more. Even when you are swimming in the middle of the sea, the waves can simply throw you away from one place to another. The character basically moves a bit according to the flow of the wave. It all feels authentic and eerily close to the real thing. It’s that good!

So, we have now established that water effects in Sea of Thieves is unlike anything you have seen but what about other assets and parameters? Most of the times you will be on your ship so at least initially you won’t come across much of the lush environment the game has to offer. Once you reach an outpost or an island, you will be in awe how everything feels so rich. Some of these locations are filled with enemies and phenomenally detailed floara and fauna.  Sun rays will bounce off of leaves and ground, giving you plenty of photo capture moments throughout the game. Again, most of this isn’t photorealistic but it looks absolutely amazing thanks to the physical based lighting.

Another aspect that really shines in Sea of Thieves is the day, night cycle. To begin with, the 24 hour cycle runs too fast for my liking. But looking at the early morning sun rays fall on your ship as your crew plays a melodious tune in the background sets up the tone for an exciting treasure voyage in the coming moments or the pin-drop silence as night falls and you make your way stealthily through a eeries island…all of this comes alive thanks to some fantastic use of volumteric effects, physical lighting and the atmosphere. 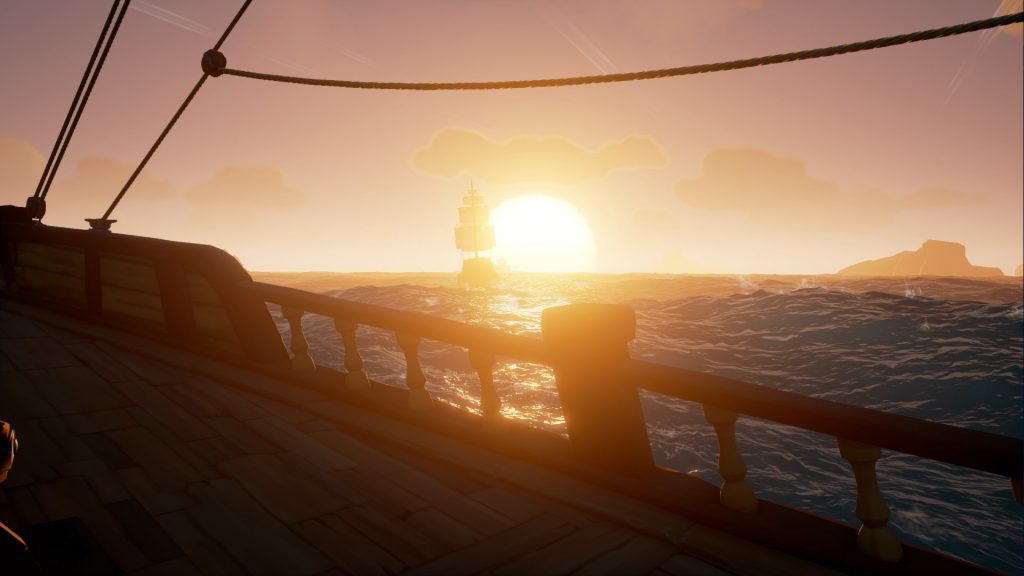 If there is anything that is a tad disapppointing with Sea of Thieves is its character design. It feels too cartoony and lacks the seriousness that some of the other technical paramaters bring to the game. I know it’s just probably me and a stylistic choice by Rare but still, it feels a bit odd.

I got the chance to play the game on both the Xbox One and the far superior Xbox One X. Unfortunately, we weren’t able to capture the same scenes side by side due to how dynamic the gameplay is but we have good news for both console owners. To begin with, the Xbox One version runs at a native 1080p resolution whereas the Xbox One X version renders the game at 4K resolution. Both versions are locked at 30 frames per second and it seems like Sea of Thieves is pretty well optimized on the performance front on both consoles. However, there are some key differences present specially in the way textures are presented on both units.

The Xbox One X, as expected, features higher resolution textures compared to the Xbox One, which look a little blurred out on the latter. The Xbox One X also takes the lead in other departments such as shadow quality, ambient occlusion and quite possibly draw distance, which is crucial in a game like Sea of Thieves. Although we didn’t got the chance to try out the Windows 10 version, we have been hearing reports that the Xbox One X version is  on par with ultra-spec PC settings, which if true is simply breathtaking. However, the lack of 60fps option might be off putting for some players, which is completely understandable given you will be traversing the seas for the majority of time.

Sea of Thieves is one of those games that won’t grab your attention almost immediately, like for say Gears of War 4. It’s also not a game that emphasizes on pushing the hardware to its limit but neither it’s a game that isn’t visually stunning. I think Rare has achieved a perfect balance between meeting their trademarked art style along with intricate graphical details. And when you combine the two, you see something special. And that something special is what makes Sea of Thieves unlike any other game in the technical department.

Tagged With: Microsoft, Rare, Sea of Thieves, Xbox One, xbox one x