Hellblade 2’s brief teaser answers some key questions about the direction that visuals will take on Xbox Series X.

At this year’s The Game Awards, Sony and Microsoft appear to have jointly decided to surprise everyone by announcing Godfall and Hellblade II, the first exclusives for the PS5 and Xbox Series X respectively. While neither showed actual gameplay, the Hellblade II reveal outed over two minutes of in-engine footage. It’s not much to go on, but that brief glimpse answers some key questions about the direction that visuals will take on Xbox Series X. Here are some of the graphical highlights of the trailer.

Right at the beginning of the trailer, there’s a long overhead shot of the sea. We get a good idea here of what Ninja Theory is targeting in terms of water rendering in Hellblade II and we’re quite impressed. Waves appear to be mesh-based, with a fairly high level of geometric complexity, at least by eighth-gen standards. We see high resolution texture assets in use to highlight high frequency detail like the foam. The high quality of texture assets is something of a recurring theme here. Evidently, the Xbox Series X’s generous memory pool has allowed Ninja Theory to craft extremely high quality textures, across the board. Even on Xbox One X, texture work is sometimes compromised relative to PC because of how memory intensive 4K is. Here, we see no such limitation.

The shot of the sea is followed by an overhead shot of a rocky, volcanic environment. We’re pointing out again that texture work here is of the highest quality: these assets positively shine in 4K. But the real generational leap on show here is the massive increase in surface geometric detail. Through the eighth-gen, we’ve been accustomed to geometry shortcuts like tessellation and parallax occlusion mapping. These create the illusion of depth on relatively flat surfaces viewed at oblique angles. In Hellblade II, the raw power of the Xbox Series X’s Navi GPU comes to the fore. Surface objects like small rocks appear to be made of real geometry, with photogrammetric textures wrapped around.

And speaking of photogrammetry, we have a strong suspicion that Ninja Theory may be using Quixel’s Iceland photogrammetry texture archive. Hellblade II is likely powered by Unreal 4, as the original was. Epic recently acquired Quixel, a photogrammetry startup, and released a large number of extremely high quality photogrammetry assets to developers. These include Quixel’s Iceland assets–the rocks and ground surfaces here bear an uncanny resemblance to Ninja Theory’s work in Hellblade II. Photogrammetry has been increasingly common in games as the eighth-gen draws to a close. By using scans of real-world objects, it helps take next-gen games a step closer to photorealism. 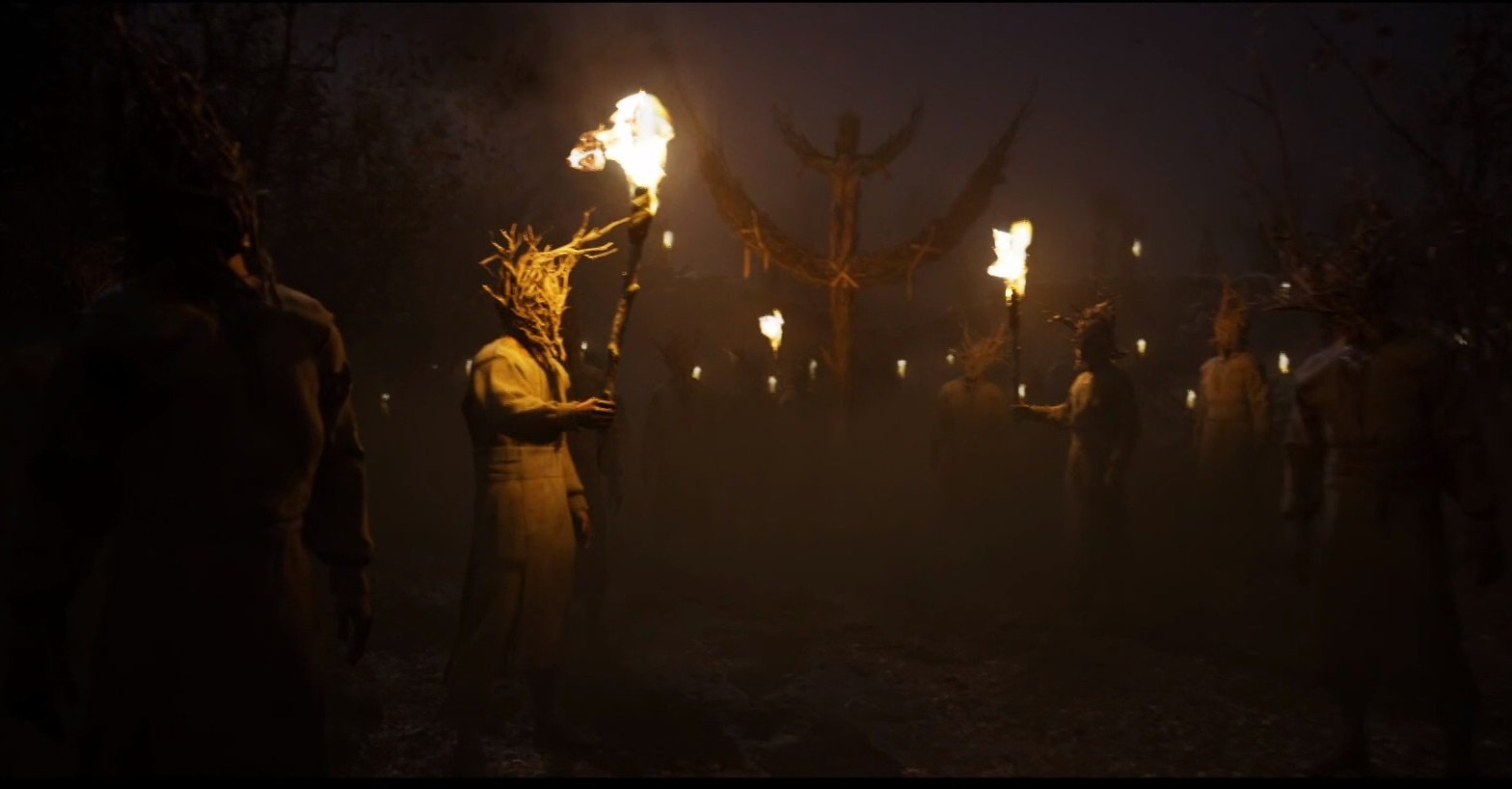 We’re shown a distant shot of both cloud rendering and a smoking volcano. What’s surprising here isn’t so much the effect itself. Volumetric particle rendering has been an important part of the eighth-gen visual repertoire for quite some time. What impressive about Hellblade II is the sheer density of the particle volumes. Using low resolution volumetric effects was a common approach to optimization on eighth-gen platforms. This is evidently a case where the core tech hasn’t changed, but the increased GPU power of the Xbox Series X allows for a far more refined implementation.

LOD scaling has always been a challenge on eighth-gen platforms. This is because extending draw distances hits both the CPU and GPU. At high resolutions, eighth-gen consoles just don’t have it in them. A number of tricks, such as using distant static depth-of-field have been used in games to mask the impact of short draw distances. But the problem remains. Titles like The Witcher 3 and Red Dead Redemption 2 often feature draw distances even lower than the PC low setting, because the Jaguar CPUs in the consoles couldn’t cope with the number of draw calls. In Hellblade II, we see remarkably generous LOD scaling, with 3D objects rendered in high quality at what appears to be several hundred meters.

Every time we move to a new console generation, the added graphics horsepower means that the fundamentals–character models, textures, and lighting, get significant boosts in fidelity. With Hellblade II, model quality is now higher than the remarkably high bar set in 2007 by the movie Beowulf. Senua’s own character model receives significant enhancement over the original game. Hair rendering is much-improved, with a greater density of strands and better hair physics simulation. Polygon counts have increased significantly as well, with high frequency details like individual teeth and stitches in leather now made of geometry. One compromise that was often made in the eighth-gen was using lower quality NPC character models. The polygon budget is large enough now that multiple onscreen NPC characters can be rendered at a high fidelity, and not just the player model. 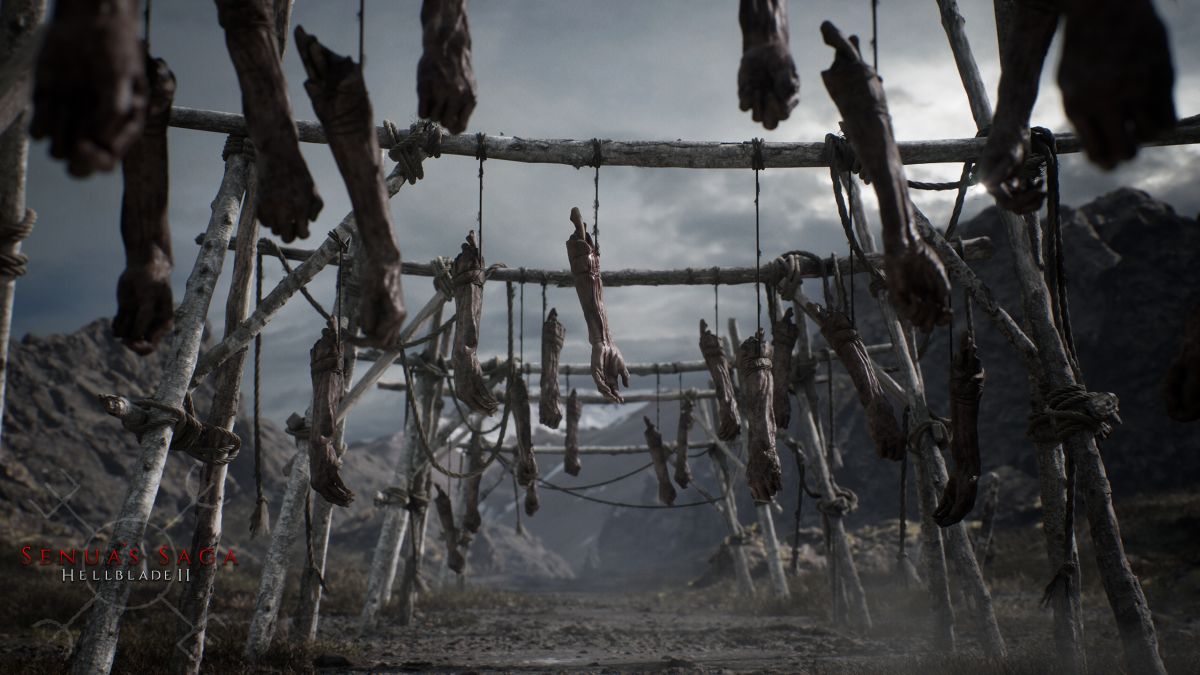 Cloth physics–and general soft-body physics simulation–have been a thing since the 7th-gen. However, generational improvements to CPU and GPU capabilities mean that the quality of the physics simulation has improved significantly over time. Eighth-gen games–including Hellblade: Senua’s Sacrifice–featured cloth physics. However, the number of “bend points,” where cloth could ripple, was relatively limited, meaning that fluttering cloth and sails still looked stilted. In Hellblade 2, cloth physics simulation has improved dramatically. Air ripples realistically across the ragged, fluttering sails–which now resemble sails and not stiff sheets of cardboard.

In terms of post-processing, we don’t see much that’s new in Hellblade II. What we do see is refinement. Everything–from bloom to depth of field to motion blur–is present and accounted for, and of a much higher quality than in the previous game. Low-quality post-processing was another easy optimization shortcut in the eighth-gen. Low-res depth of field effects, for example, “got the job done,” by emphazing the object in focus. Artifacting and a poor blur effect meant that in-game depth of field was still a ways off from the “real deal.” In Hellblade 2, we see an extremely high quality implementation of bokeh depth of field. We also see per-object and camera motion blur with very high sample counts. These bring a significant degree of cinematic flair to the game.

Hellblade: Senua’s Sacrifice was an eighth-gen visual showcase. It offered gorgeous visuals, though, at the expense of being a very constrained experience. In Senua’s Saga, the Xbox Series X’s vastly enhanced capabilities mean that better visuals can be delivered right alongside greater scale. We are a bit concerned that Microsoft failed to show actual gameplay footage. But if the in-engine trailer here is even remotely close to in-game 9th gen visuals, we’re excited for what the PS5 and Xbox Series X will bring in less than a year.