For all the spin-offs throughout the years, from rogue-lites to a VR game, Serious Sam 4 is the first true sequel in the franchise. It’s been nine years since the prequel to the time-traveling original. Has the Serious One aged with the times or remained a relic like so many of the artifacts that he’s been chasing?

Right off the bat, the story sees Sam and his squad of the Earth Defense Force’s Alien Artifact Acquisition division venturing to Rome. Word has gotten out about an alien artifact that could lead to greater things so naturally, AAA is on the case. It’s not long before the convoy is attacked and Sam is thrown into the thick of things yet again, mowing down Mental’s hordes by the thousands in the name of humanity.

"For as likable as the story and characters can be though, they likely won’t resonate with FPS fans expecting a deeper narrative."

You’re not necessarily picking up a Serious Sam game for the story. That being said, I was pleasantly surprised at how well the narrative adapts the big-budget, action movie blockbuster formula. It’s got all the tropes you would expect – Sam punching out his superior officer, frantic escapes from burning lava, one-liners upon one-liners, the enemy commander that cowardly mocks our hero, a somber guitar that plays during quieter moments to remind us of what’s lost, the list goes on. None of it is fairly original or top of the shelf, mind you. But in the context of what Croteam is going for, it works, which is saying something considering the utter ridiculousness of it all.

AAA is full of motley personalities, from the firebrand pilot Hellfire and the rambunctious Rodriguez to the contemplative Jones and nerdy Kenny. I found myself chuckling at their corny exchanges while also appreciating the more serious (no pun intended) moments. Are they the best written characters I’ve ever come across? Hell no. Does their dialogue become annoying at times and bizarrely repeat at others? Absolutely. Nevertheless, I felt a sense of camaraderie with this pack of action movie stereotypes.

Sam is his usual wise-cracking self, making jokes while threatening to continue fighting even if all the ammo in the world ran out because – and I’m paraphrasing here – “My fists don’t need bullets.” That being said, there’s some nice character depth that makes him more human, especially in how he cares for his squad. Again, it’s all standard action movie fare but it’s done well enough for those who can get into it.

For as likable as the story and characters can be though, they likely won’t resonate with FPS fans expecting a deeper narrative. The same goes for the mission design in the campaign – for all intents and purposes, each mission is about going from one point to another, killing waves and waves of enemy aliens. Serious Sam 4 is pretty old-school in this regard – killing all of the enemies in an area will unlock the gate to the next area and sometimes, you’ll need to hunt for keys. There’s not a whole lot of variety in the kinds of objectives you’ll tackle. 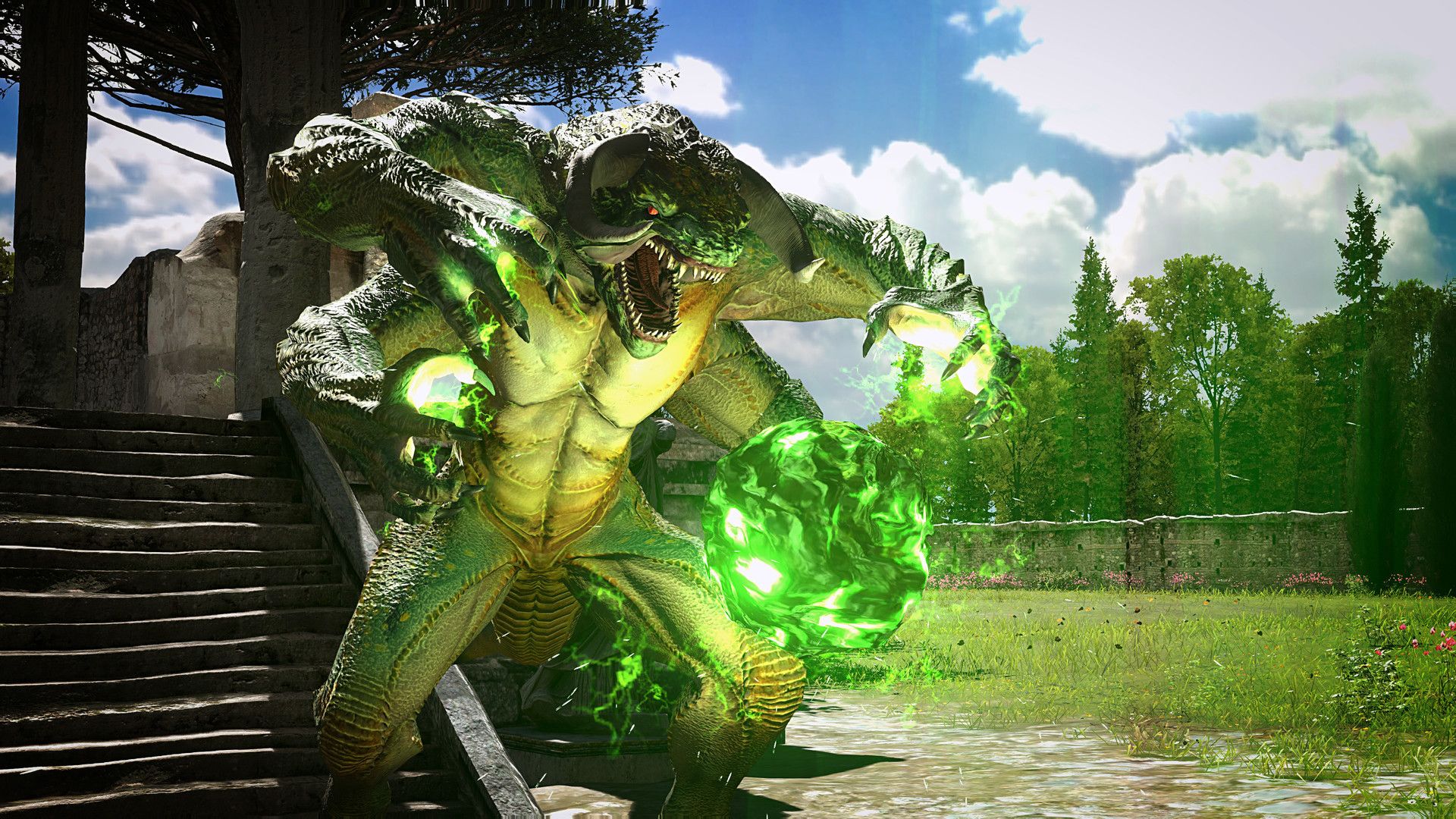 "Serious Sam has always been about throwing vast numbers of semi-mindless hordes at you, and the sheer number of them meshes well with the types of enemies on offer."

That being said, Croteam does a great job of mixing things up. Though combat takes place in wide open areas, as is the Serious Sam tradition, the various enemies and their placements feel well thought-out. This extends to the side objectives as well. Some of them have unique little stories, which can be as simple as signing a soldier’s gun or shutting down a portal machine, but they can also provide new weapons like Black Hole Grenades, unique gadgets (including one that bestows Bullet Time), new weapons like the Assault Rifle and Tactical Nuke, and even attachments.

Even if you choose to ignore the side objectives, there’s still plenty to like about the core gun play. Serious Sam has always been about throwing vast numbers of semi-mindless hordes at you, and the sheer number of them meshes well with the types of enemies on offer. The freakish Processed may be easy to dispose of from afar but throw in some charging Kleer, various Gnaar, a Werebull or three, and some Beheaded Kamikaze, and suddenly you’re running, circle-strafing, jumping, and quickly switching between weapons.

Some encounters might see you taking down Octanian Snipers or Arachnoids from a safe distance while others introduce ignited Space Mummies that throw fireballs. Even the boss fights are pretty well done, adding a few wrinkles on top of the traditional “shoot it in the face and/or weak point till its dead” mechanic. It also doesn’t hurt that despite predominantly taking place in and around Rome, there are all kinds of interesting vistas to explore, including the cityscape, coliseums, ruins and a lava-ridden landscape.

Weapons feel appropriately powerful and responsive, whether it’s the pump-action shotgun or grenade launcher. The attachments also feel great, like the shotgun’s grenade launcher or the grenade launcher’s cluster bomb. It all makes you feel like a bad-ass while still creating an air of danger thanks to the sheer number of swarming enemies. Not every new mechanic feels like an instant win though. There are now Melee Finishers a la DOOM and they can be upgraded to restore health or take down bigger enemies. The problem is that they can only be initiated from the enemy’s front. Dodged a Processed and want to execute a Finisher from behind? You can’t. In fact, you have to be perfectly in front of it for a Finisher. 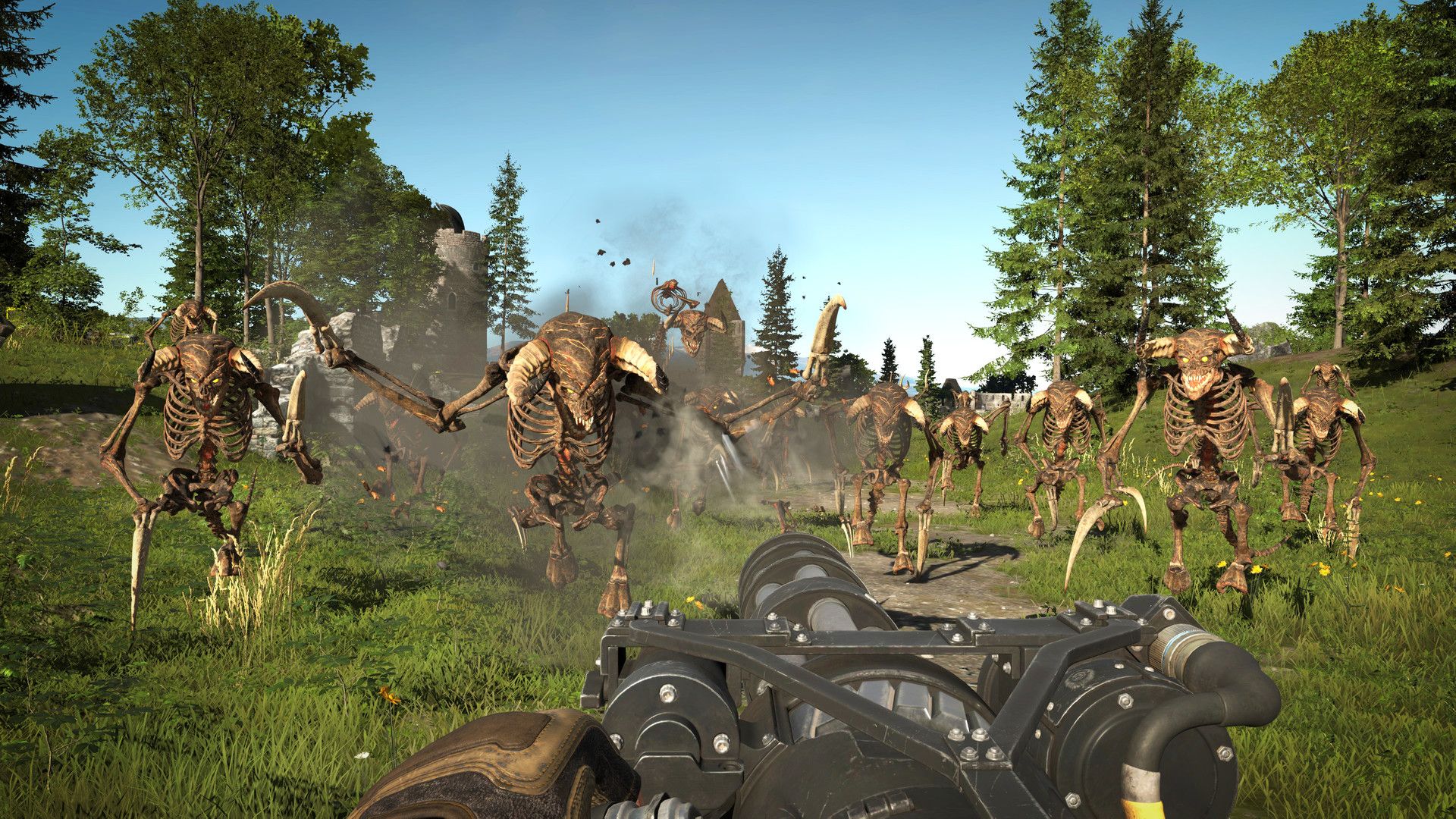 "While it won’t dethrone the likes of DOOM Eternal or even Metro Exodus in terms of sheer fidelity and detail, it’s still a good looking game."

This becomes an even bigger issue when dealing with foes like the Kleer since the window to finish them is small. Sam isn’t impervious during the actual Finisher animation either so having to attack perfectly from the front is an additional detriment in many cases. This same issue plagues the new ability to ride Werebulls. Once the skill is unlocked, simply hit E to mount a Werebull…at least in theory. You have to do it from the front, which is a tall task when it’s charging you down for massive damage. Even backed into corner and literally jumping on a Werebull didn’t offer the prompt to ride it.

The other skills are fairly straightforward, from faster reload speed and dual-wielding weapons to using sign posts and other objects as melee weapons. Hunting down Artifacts of Might allocates skill points with each skill only requiring one point. You’re free to mix and match, and reassigning skills can be done freely at any time.

In terms of presentation, Serious Sam 4 is good overall, barring some issues here and there. Rome looks aesthetically pleasing, while all of the aliens are sharper and more suitably menacing than ever. The attention to detail is also well done, whether you’re traipsing through ruins or wandering through forests. Of course, you sometimes have to stop and admire the sheer number of enemies running, screaming and galloping towards you. While it won’t dethrone the likes of DOOM Eternal or even Metro Exodus in terms of sheer fidelity and detail, it’s still a good looking game.

Sound quality is a slight notch below the visuals, especially when it comes to some enemy sounds (which sound old-school by default), but it’s still executed well overall. The voice-acting is decent, which helps when Sam is throwing out a litany of crab puns. The music isn’t too varied but has some good pieces – like the heavy metal track that plays while battling a Witch-Bride for the first time. Other tracks are good at setting the atmosphere while more fast-paced tunes will fade in when the action heats up. 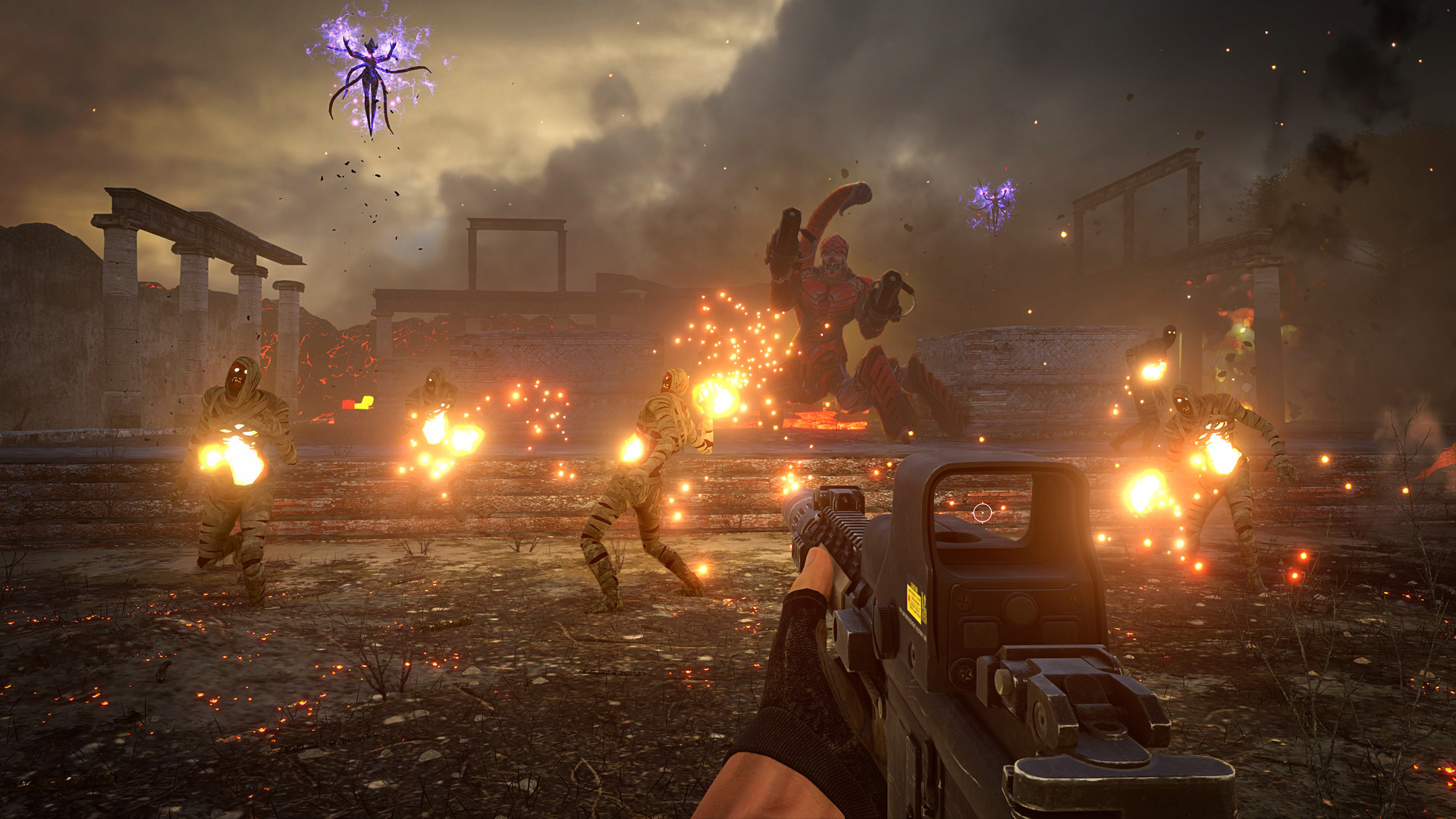 "Overall, Serious Sam 4 is no masterpiece but its combination of blockbuster movie action with non-stop shooting action is still pretty fun."

In the Settings menu, there are options for anti-aliasing and resolution but you can’t really fiddle with texture quality, foliage density or some other finer details. Instead, there’s an option to set CPU Usage and GPU Usage from Lowest to Ultra while also choosing a target framerate. It took some time to settle on a decent setting, which – given my setup of an Intel Core i5-4400 at 3.10 GHz, 8 GB of RAM and a GeForce GTX 1060 with 6 GB VRAM – consisted of Medium settings at 900p resolution. It wasn’t perfect, which makes sense when looking at the system requirements, but it offered some nice performance.

Unfortunately, there are a number of different bugs and glitches, from oddly fluctuating textures in cutscenes (which, by the way, have some strangely lifeless eyes on the character models) to subtitles and entire lines of dialogue cutting out. Another issue saw the music following a major battle abruptly stopping instead of fading out. Audio issues didn’t occur that frequently and there weren’t any crashes or major performance issues. The AI was a bit iffy though with enemies sometimes running into walls or, more rarely, ignoring my presence after killing their friends. These will likely be addressed pretty quickly and while not heavily dragging down the experience, they do dull its sheen a bit.

Overall, Serious Sam 4 is no masterpiece but its combination of blockbuster movie action with non-stop shooting action is still pretty fun. Even if the story is generally forgettable or the mission design feels one-note, Croteam has managed a seriously impressive revival for its cult classic shooter.

Responsive gun play and a constant stream of varied enemies to fight. Rome looks stellar and offers a variety of environments to traverse. Side objectives add some nice flavor to missions. New gadgets and weapon attachments provide even more fun. Action movie narrative can be entertaining with some decent characterization and voice-acting.

Despite its B-movie chops, the story is relatively forgettable. Mission objectives often devolve into the same running and gunning from point A to B with few exceptions. Some mechanics, like Melee Finishers and riding enemies, need improvements. Technical glitches and bugs undermine the overall presentation.

Final Verdict:
GOOD
Serious Sam 4 won't rewrite the book for narrative FPS campaigns and that's perfectly fine. It sticks close to the series' roots while offering some contemporary improvements and improved presentation. If you're hankering for some straightforward shooting action that doesn't take itself too seriously, Sam "Serious" Stone's got your back.
A copy of this game was provided by Developer/Publisher/Distributor/PR Agency for review purposes. Click here to know more about our Reviews Policy.