Of the many VR titles displayed at E3 2016, there’s one game that stands out without having revealed too much. Croteam has a reputation for delivering surprises, as The Talos Principle proved, and Serious Sam VR: The Last Hope seems to be no exception. Though primarily on the rails, it allows players to experience the universe from the eyes of Sam “Serious” Stone for the first time and promises to deliver the thrills and mayhem that the franchise has excelled in.

Mario Kotlar, gameplay and level designer on the game, spoke to GamingBolt about the difficulties in bringing the franchise to VR and whether this is a simple “shooting gallery” or something more. 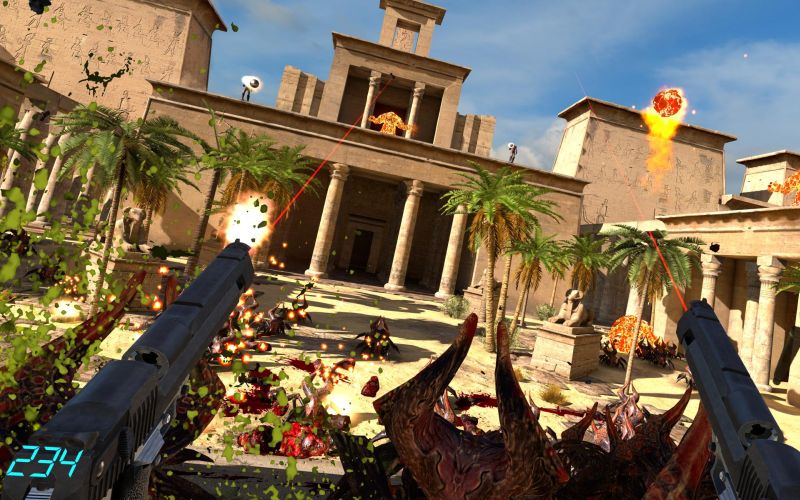 "One of the challenges of course when it comes to translating the franchise itself, is that franchise is largely based on clever and fast movement… a lot of movement."

Serious Sam VR: The Last Hope had a rather interesting reveal at E3 2016. What motivated the desire to create a virtual reality version for the franchise?

We got a bunch of VR devkits from both Oculus and HTC/Valve, and we were very impressed by their technology. Some of our members were naturally inspired to just drop everything and make a VR game right away, but that isn’t as easy as it sounds, we wouldn’t want to pause SS4 development once again now would we?

Ideas were thrown around on how to satisfy both our craving to do something with those devkits, while not pausing SS4 development as a consequence. Porting Talos was one obvious idea, so a small effort was made rather early on to see if a quick and easy port to VR would be viable… but upon closer inspection we realized that would take quite a bit more time and effort. And then after a while, Davor (Hunski, COO) created a little tech demo to test how shooting SS weapons in VR would feel like.

Rest of the team loved it. Davor suggested that we try and make a small side project, a simple wave based shooter, and the two of us started working on it for the next few months. When we had a working alpha, a few more Croteam member jumped in to help us wrap it up and make the game more than a just a tiny wave based shooting demo.

What difficulties did you face in translating the Serious Sam universe into VR?

The standard set of VR difficulties every VR dev faces. Since you’re no longer looking at the game, but are actually in the game, we had to reinvent many of the design approaches we took for granted. UI is an easy example of something that had to be completely reinvented, since it’s something traditionally found on the screen… and now there was no more screen.

One of the challenges of course when it comes to translating the franchise itself, is that franchise is largely based on clever and fast movement… a lot of movement. And suddenly movement is the biggest problem in VR, and since we decided not to mess with motion sickness and make an experience everyone can enjoy, we were left with either room-scale or teleporting. We figured teleporting would needlessly complicate production and Davor just didn’t feel it would work well, so the next challenge was seeing if we can make it feel like a Serious Sam game even if the player is only able to move a few meters around the play space. Turned out with we could!

Though it initially appeared to be an FPS, it was revealed later that you don’t really move in Serious Sam VR. As such, do you feel this “shooting gallery” approach will limit the appeal for hardcore fans?

I honestly can’t wait for the release so we can find this out! Having said that, we had overwhelmingly positive response from tons of people play testing the game at Gamescom where we had a bunch of PCs running it. 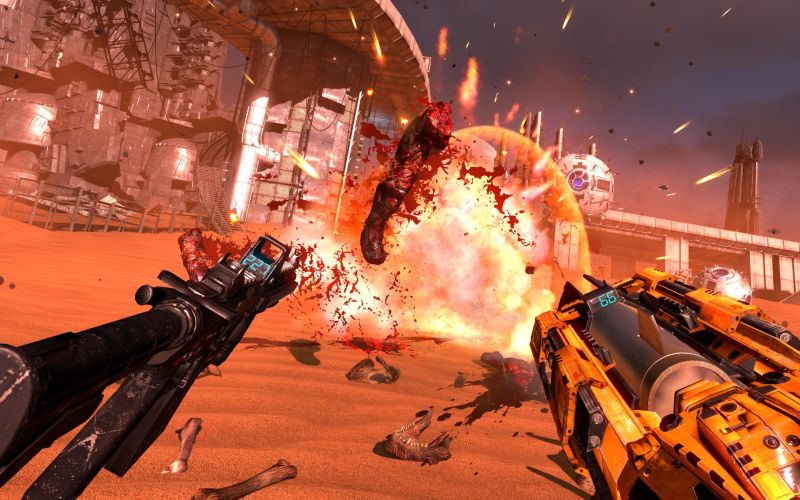 "We will have all classic Serious Sam traditional weapons, with addition of laser guns which are new."

Will there be any on-rails sections that propel players forward into different environments?

We have an elevator planned. We were playing around with an idea of having horizontal rail, but we have no idea if we’ll end up having one in the later levels or not.

For certain sections, can players complete different objectives or challenges for more points?

Not different objectives per se, but an extra challenges certainly. The idea is to have player try and replay the content without dying, and then try to do it in hard mode without dying, to get maximum points. So the extra challenge is in the hidden layer of gameplay, figuring out all the tricks of each level, all the little ways that will allow you  to max out your score, a score which we’ll make sure you’ll want to max out, because we plan to award you with points you can later spend on upgrading skill tree, unlocking awesome skills and upgrades, etc.

What weapons can we expect to see return in Serious Sam VR? Are you adding any new weapons to the mix?

We will have all classic Serious Sam traditional weapons, with addition of laser guns which are new. We naturally tweaked most of the weapons to better fit this new kind of gameplay. And we might add even more if we feel like it. But do note, that when skill tree comes around, weapons won’t be your only way to blow up enemies.

Can players still battle the huge bosses from the previous games? What new enemies or bosses are being thrown into the mix?

Huge bosses? Hell yeah! From previous games? No! We’re designing a bunch of brand new bosses specifically for VR experience. We’ll certainly have new enemies as well, but I really don’t want to spoil too much right now.

It was noted that Serious Sam VR will be coming to Oculus Touch and HTC Vive. What is its status for PlayStation VR at this time?

We are targeting all VR platforms that provide motion controllers, so naturally PlayStation VR headset paired with PS Move controllers sound like a natural fit. 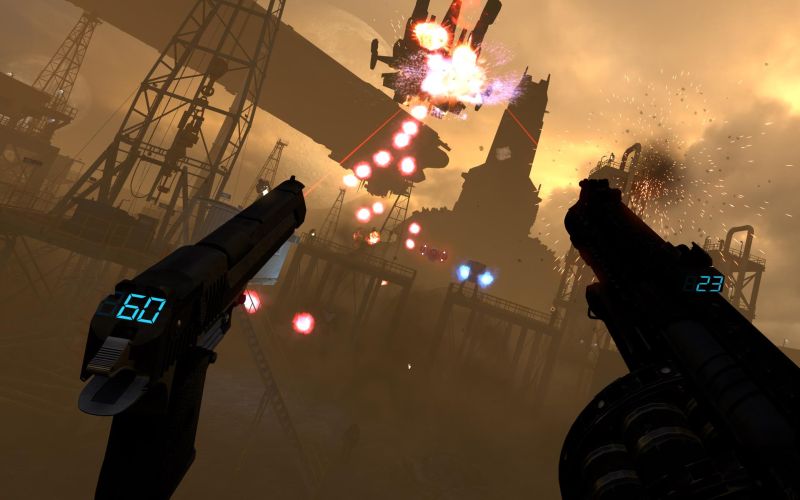 "[Serious Sam 4] is taking a long time because it’s really a huge project which should satisfy all fans of the series, and we want to do it right"

What will set Serious Sam VR: The Last Hope apart from other similar shooters heading to VR platforms in the coming months?

Most of us aren’t very impressed with the current lineup of VR shooters, so our idea is to fix that lineup and provide a game that will set itself apart from others by being leagues above other shooters in terms of gameplay.

Could we see any other Croteam titles possibly making the leap to VR in the coming years?

We can’t promise anything just yet, we’ll wrap this one up and see.

Can you tell us what is up with Serious Sam 4? Will we see it in action later this year?

Not this year, we’re still working on it. It’s taking a long time because it’s really a huge project which should satisfy all fans of the series, and we want to do it right, until WE are fully satisfied with gameplay and looks.

I am sure you must have heard about the Xbox One Scorpio. What is your take on Microsoft’s claim of developing the most powerful console of all time with it? Do you think the Scorpio is more of a reaction towards the negative reception that Microsoft received with the Xbox One’s underpowered hardware compared to the PS4? Sony is also launching the NEO sometime in the future. Do you think it may take some of the hype away from the upcoming PSVR launch? Do you know anything about Nintendo NX? Anything you can tell about it to our readers? Any plans to develop for it?

We don’t like speculating on new hardware. Once it’s in our hands, we’ll see what we can do with it.