Skateboarding games used to be all the rage back in the late 90s, with Tony Hawk’s Pro Skater obviously being the king in this specific brand of sports games. While the popularity of these once-gargantuan franchises has certainly diminished over the years, they are still the go-to games for anyone looking to skate in a virtual world. That said, developer crea-ture has been silently making its moves in this niche with Session: Skate Sim; a game that ditches the arcadey roots of its inspirations and brings forth a complex simulator that’s probably the closest you’ll get to skateboarding in real life. Session: Skate Sim was released into early access on Steam in 2019, and after two years of continuous updates – the game has finally reached the 1.0 version with a final release on consoles and PC.

As mentioned previously, Session: Skate Sim is a proper simulation of what it’s like to ride a skateboard in real life. So unlike its obvious inspirations like Tony Hawk’s Pro Skater, pulling combos isn’t just a matter of pressing the right button combinations after a jump; Session: Skate Sim demands that players have a deep understanding of how the board and the jumps work in order to perform them in the game. The controls seem pretty unintuitive at first; the two thumbsticks control the front and the back foot respectively while the two triggers help steer your player character in the respective direction. Acceleration is performed through two face buttons (one for each foot), all of which culminate in a pretty steep learning curve that’s hard to get used to. Even doing basic maneuvers like skating and steering requires some experience with these controls, and you are probably going to fall a lot during your first couple of hours with the game. 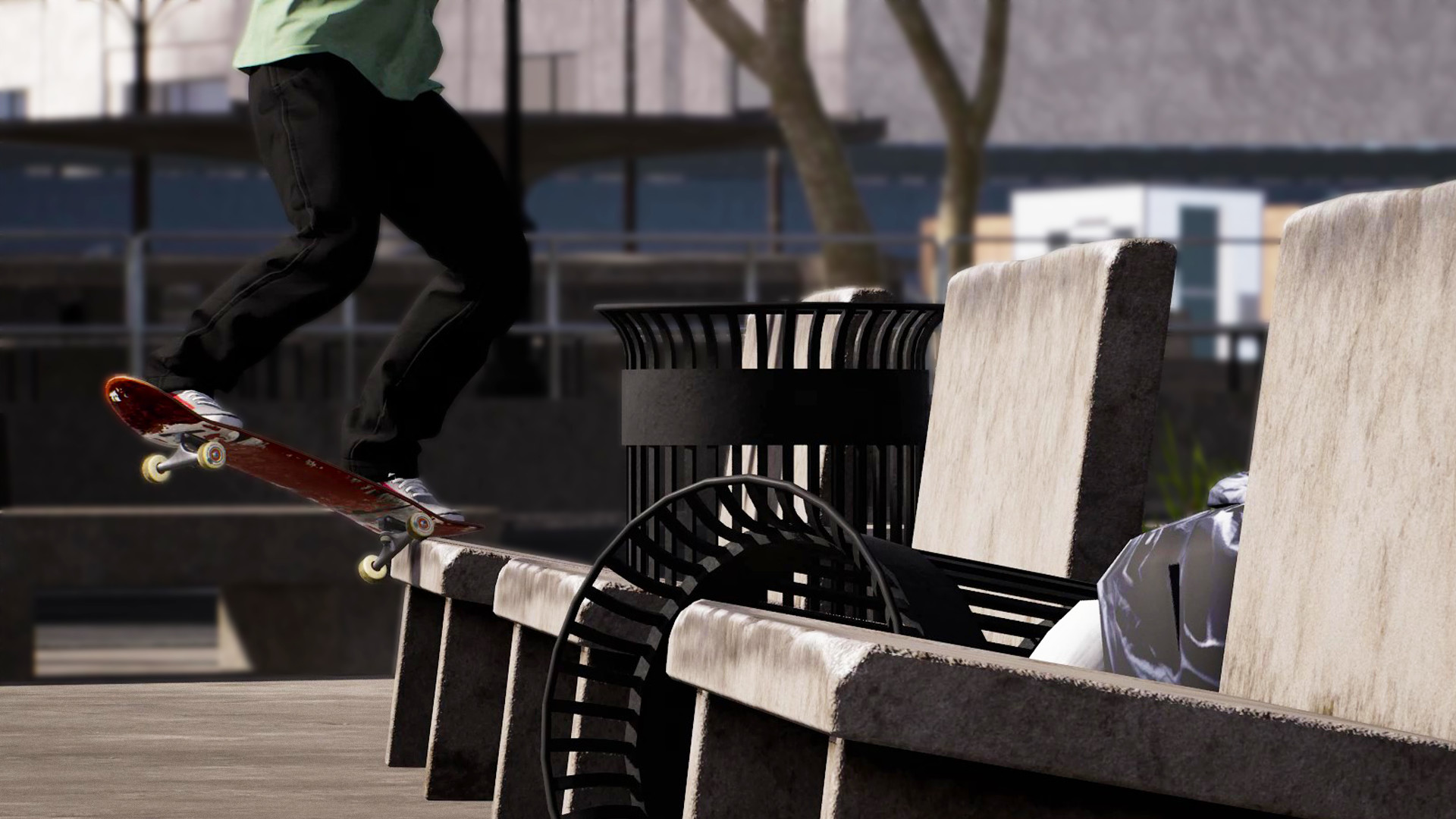 " So unlike its obvious inspirations like Tony Hawk’s Pro Skater, pulling combos isn’t just a matter of pressing the right button combinations after a jump; Session: Skate Sim demands that players have a deep understanding of how the board and the jumps work in order to perform them in the game."

Upon booting Session: Skate Sim for the first time, you will be taken through a basic tutorial that will teach you the basics of movements and how to perform a couple of stunts and feats. There’s also a pretty in-depth character creator that allows you to create a custom skater by choosing from a bunch of different apparel and facial styles and whatnot. The final release also features pre-made character models of some renowned skaters such as Torey Pudwill, Nora Vasconcellos, and Ryan Thompson just to name a few.

Once you are done with these formalities, you are dropped right into the deep end of the pool. One of the biggest additions with the final release of Session: Skate Sim is the story mode, which sees you completing a set of missions scattered all across the map as you embark on a journey from being a nobody to a pro skater. Missions are pretty basic in their scope, but completing them will net you cash and exposure, and currencies are needed in order to gain access to better boards and gear from the in-game store.

While the writing itself can be smirk-inducing at times, it’s pretty bland for most of its runtime with nothing in the name of plot twists or character arcs, or anything in that vein. The mission objectives are pretty similar too, tasking you with performing highly specific moves at specific spots around the map – which can get frustrating especially early on when you aren’t all that well-versed with the controls. Furthermore, the lack of advanced tutorials and the hit-or-miss registration of the stunts can make getting through some of these challenges way more frustrating than it needs to be. All in all, it’s a pretty barebones campaign that’s meant to ease players into the world of Session: Skate Sim – but I can’t help but feel that it could have been so much more than that. 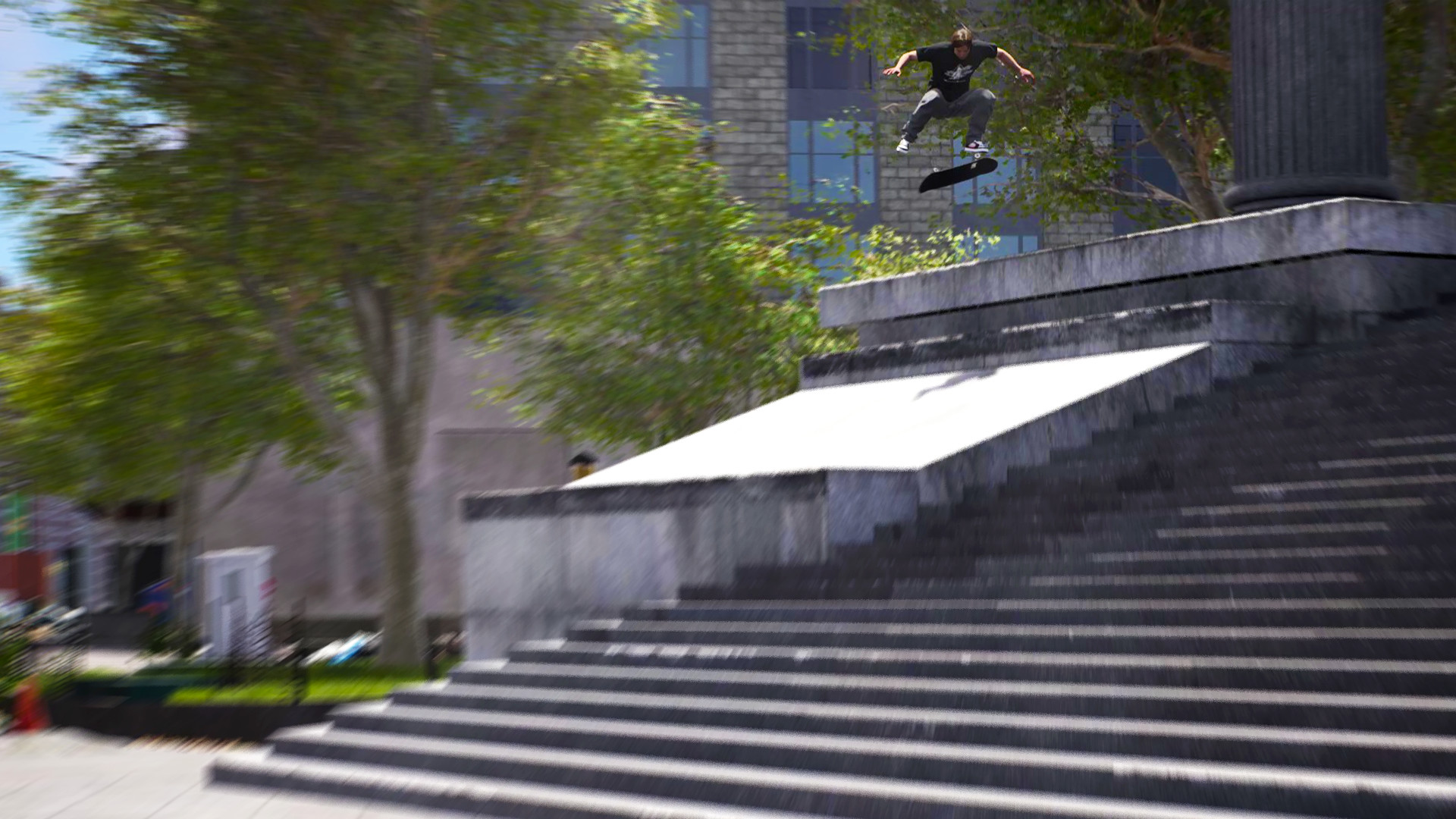 " All in all, it’s a pretty barebones campaign that’s meant to ease players into the world of Session: Skate Sim – but I can’t help but feel that it could have been so much more than that. "

As such, I found myself mostly ignoring the story missions altogether and just trying to carve out my own fun in the multitude of skating arenas in the game. Session: Skate Sim is physics-driven for the most part, and requires precise movements to nail flips and ollies or any trick that you can come up with. Even minute factors such as the type of terrain and board length and wheel size all contribute to the stability and utility of your skateboard. Between this and the fact that the camera is jutted at a very close angle to the player, gauging the appropriate distance for jump and noticing some terrain irregularities became a pretty prominent issue for me which led to more than a couple of goofy fails. But crea-ture has implemented some accessibility mechanics to combat this inherent frustration, such as being able to mark a start spot for instant respawning after any unfortunate accident.

Of course, once you master these mechanics – you will have plenty of opportunities to pull off ludicrous stunts ranging from manuals to ollies to kickflips and what have you. Session: Skate Sim features a wide variety of maps for players to goof around in, ranging from underground stations to skate parks to alleyways to main roads just to name a few. Some of them are even based on real-life skating spots as well, so there’s that too. Furthermore, you’re also free to pick up your board and explore these levels on foot, which can be helpful if you want to navigate through complex areas or just want a change of things.

Session: Skate Sim has received a slew of notable additions since its early access beginnings thanks to plenty of content updates, all of which pay off in the final release. Lip tricks and animation blending are two new experimental features, alongside animation blending and NPC presence on maps. And yeah, there’s also a feature-rich replay editor that you can use to cinematically capture your tricks and flips with plenty of control should you have the mechanical prowess to actually pull them off. These additions might not mean much to anyone following the game for a while, but when looking at the big picture – Session: Skate has certainly added many things to the experience. 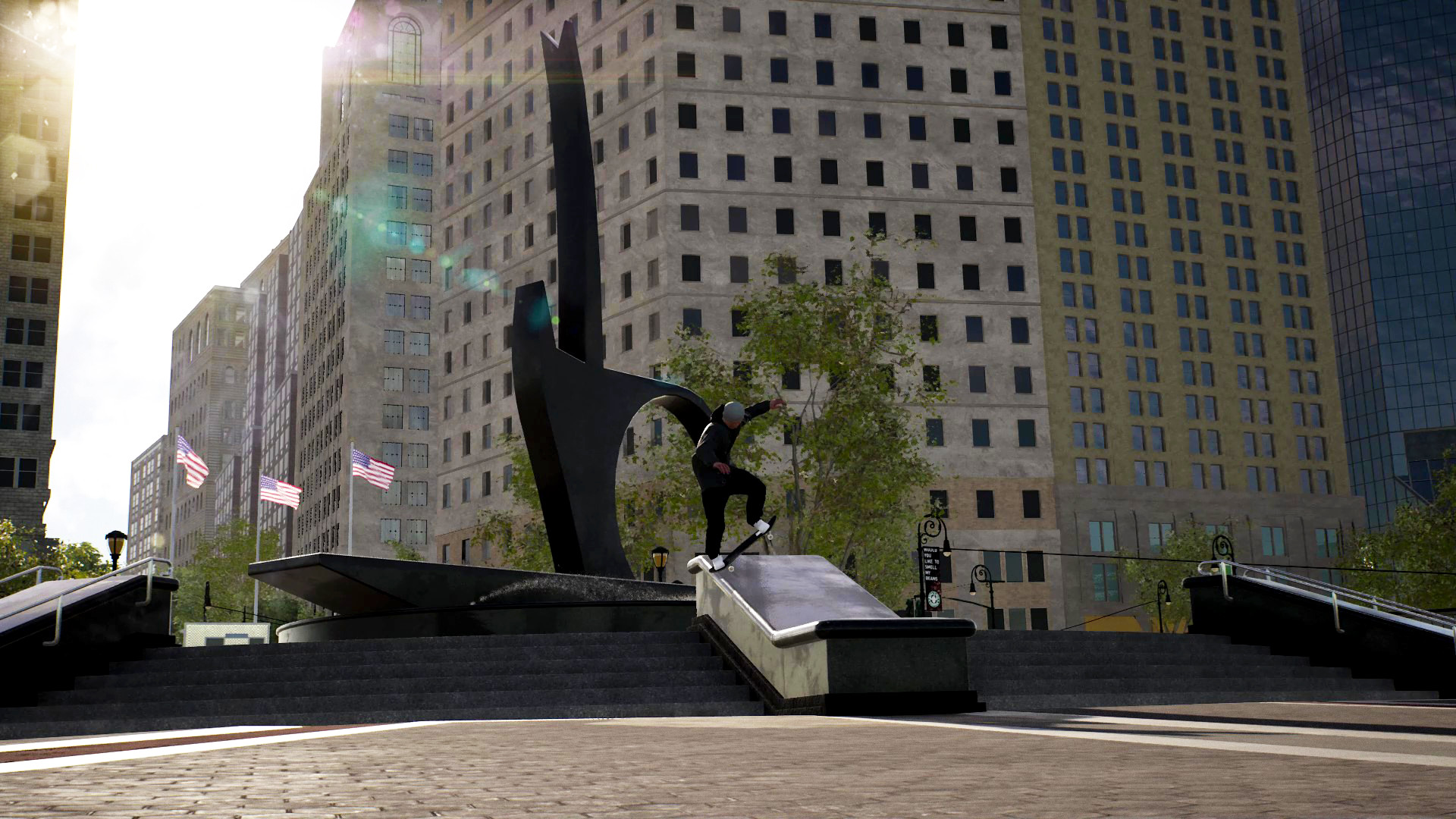 "Visually, the game just looks bland with lifeless textures and poor lighting and visibly low draw distance. There’s no voice acting in the story mode, and the world itself is lifeless and non-reactive to a fault. "

But a major gripe that really sours the experience is a visible lack of quality in terms of overall presentation. Visually, the game just looks bland with lifeless textures and poor lighting and visibly low draw distance. There’s no voice acting in the story mode, and the world itself is lifeless and non-reactive to a fault. There are plenty of featured soundtracks, but none of them really stood out during my experience with the game. While it’s understandable that an indie game like this one wouldn’t have the resources to compete with AAA levels of production quality, the visual presentation ends up being so flat that it verges on the edge of being off-putting. While the game itself is technically stable for the most part, I did experience a few graphical bugs and glitches here and there as well.

In conclusion, Session: Skate Sim is a hardcore simulation game which means it might not probably appeal to anyone not willing to spend dozens of hours in trying to understand the many nuances of this complex web of mechanics and physics. On the flip side, the bland visual presentation and the lackluster story campaign will put off even the most ardent fans of the genre.

Final Verdict:
FAIR
With a steep learning curve and bland presentation, Session: Skate Sim ends up being a mixed package for hardcore and casual fans of the genre.
A copy of this game was provided by Developer/Publisher/Distributor/PR Agency for review purposes. Click here to know more about our Reviews Policy.