I myself, even as it is my job to know certain things, have fallen victim to only thinking of Turtle Beach or ASTRO, when gaming headsets come to mind at times.  The bottom line is that you better start looking at what else it out there, because the Sharkoon X-Tatic SR Headset absolutely blew me away.  Just for a moment lets put quality and design aside, because without factoring those aspects in, the X-Tatic SR is the ultimate headset that could have everything you could possibly need in them.  Don’t misunderstand me, as the quality and design of the X-Tatic SR’s are great, but these bad boys do it all and are made to do it all, including the digital support it needs to handle what they offer.  They are with out a doubt one of the most unique headsets I have ever seen or used.  You don’t see many Reviews for products that don’t heavy advertising, but here is proof that Sharkoon put it all the money into their multi-platform design.  Plus here at GamingBolt.com we review it all and the X-Tatic SR’s ship with a hell of a lot ability that I cannot say about many other headsets.

I am trying to think of what I can’t plug the X-Tatic SR’s into, but I am drawing a blank.  First lets get it out of the way that they are not wireless, they are wired, getting all their power through USB and in today’s day in age, an electronic device with out a USB port, is pretty much alien technology.  In fact speaking of wires, there are a lot of them when it comes to the SR’s, so if you are not a wire person then these might not be for you.  Most high quality wired gaming headsets do have a lot of wires anyway though.  While having all those wires may be looked at as a down side you would have to have that many to be able to have a headset that can support the Xbox 360, Playstation 3, PC, Mac, Tablets, MP3 players, DVD players, Smartphones and MVP’s.  Not many gaming headsets can do all that and as a gamer, I play on all platforms so the X-Tatic SR’s are a thing of convenience.  That’s right you can go from watching a movie in surround sound on your iPad (or other tablet) to hearing man eating zombies creeping up behind you on the Xbox 360. 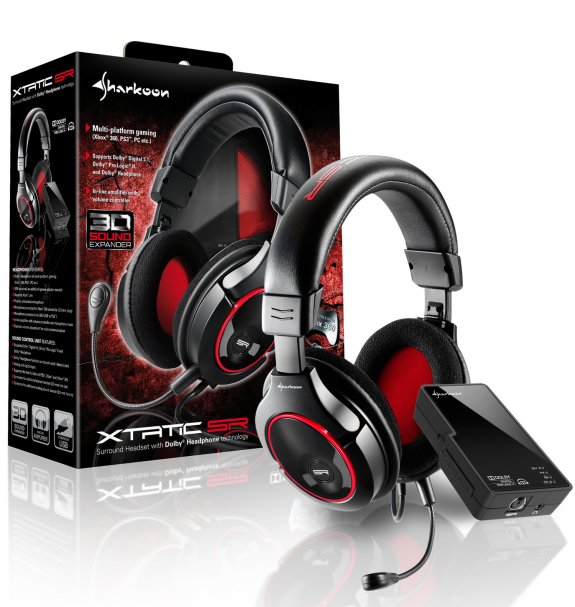 All the convenience you could need in a headset.

You may be telling yourself ‘Oh well my headset can hook up to this or that too, if I just get this wire adapter’.  Well… SILENCE!  Because not only do the SR’s come with all the wires, adapters and everything you need to hook them up to just about any multimedia device, but they have got the digital support as well, with the help of the Sound Control Unit.  The SR’s support Dolby Digital 5.1, Dolby Pro Logic 2, and regular Dolby Headphone.  The important thing to note here is that although it supports Dolby Digital 5.1 Input it does not support the same output which is a bummer but, the sound is very high quality with a crispness that you have got to love.  There is a built in amplifier and a 3D Expander as they call it to give you a unique 3D Sound with ‘multi-dimensional detection’. You can also between a Stereo input as well with the touch of a button as well as the X-Tatic SR’s also having a ‘Music Mode’ that can all be changed  by using the buttons on the Sound Control Unit (SCU).  These modes are known from the light displays on the SCU.

It also has an in-line amplifier with volume control, where there is the microphone volume control, as well as a mute mic button on the top of it, which is separate from the over sound volume control on the other side.  A clip is also provided if you want to keep the volume amplifier at a certain position.  The detachable microphone is nice as it locks in nicely with out having to worry about it falling out but can easily be detached if not needed.  Although the mic is flexible, it almost seemed too flexible as I had to keep adjusting it as I was playing games, between movements and occasionally taking it off only to put them back on.  It’s easy to chat over Xbox Live and on the Playstation 3, with microphone connecting to the Xbox through the controller via 2.5 mm plug (Xbox 360 Customized Clip), while the microphone connects to the PS3 via USB, powering it at the same time. It comes with a 3.5 mm stereo cable, a stereo extension cable, an optical connection cable (S/PDIF), a USB 2.0 cable and a G6 adapter cable.

The Sharkoon X-Tatic SR Headset also comes with detailed manuals, with pictures easily describing setup for all devices.  Overall these are a great pair of headsets at a great price of around $139.99.  There are a lot of wires and it can seem kind of bulky with all of them but as I said before it has all the convenience one would need, supporting all different media devices.  You can even connect a separate headset connected via the 3.5mm audio jack through the SCU to have two people listen in on the same thing.  The SR’s are also very comfortable which is a big deal when it comes to gamers, as I have used many headsets that start to hurt after a while, but wore these for an extended time and they felt fine.  I believe it mostly comes down to personal preference when deciding on whether or not to purchase the SR Headset.  If it has everything you want then it is a no brainer.  However it might come down to whether or not you want that crisp 3d sound, will all the convenience or you would rather spend a little more money on a gaming headset with multiple speakers with more surround sound.  This, I can’t decide for you but can say that the Sharkoon X-Tatic SR Headset is something that you will not be disappointed with. 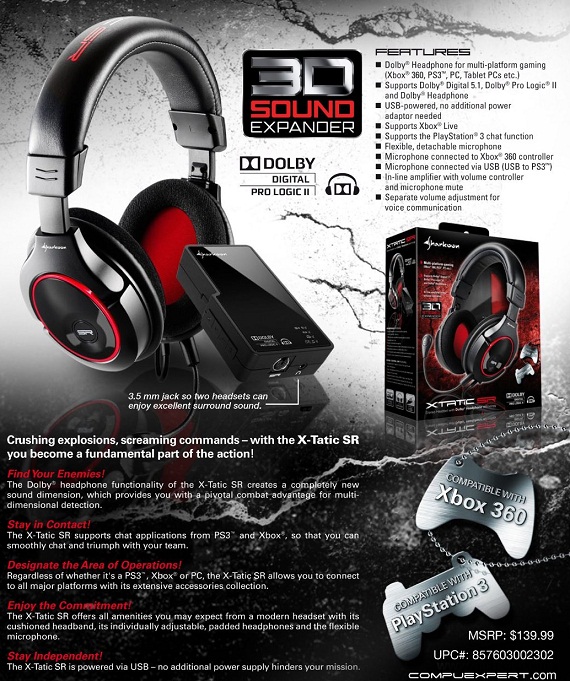 Conveniently supports nearly all media devices. Easy to connect and setup to everything. Nice crisp sound that you can keep at high volumes as well as low.

A lot of wires can make it rather bulky on an end. The wires are very sensitive. Does not have Dolby 5.1 Headphone output.

Final Verdict:
SUPERB
The X-Tatic SR from Sharkoon give you a unique crisp 3D stereo sound with Dolby Technology giving you the best sound a stereo headset can give. Made for gaming can be used on your PlayStation 3, Xbox 360, PC, & tablet, MP3 player, DVD or smartphones even.
A copy of this game was provided by Developer/Publisher/Distributor/PR Agency for review purposes. Click here to know more about our Reviews Policy.