Shenmue 3 purposely avoids revision by fearlessly leaning into its past.

It’s always nice to see a respectable classic franchise come back for the right reasons, but it’s even nicer to see a worthy continuation of a story that was left on a cliffhanger many years ago. Shenmue 3 is ultimately both of these things. The long-awaited third entry of the series attempts to bring the classic franchise out of retirement and put it back on its feet while simultaneously continuing the tale it started nearly 20 years ago on the ill-fated Dreamcast.

The series is now easier than ever to get into since the original two games were smartly released in a modern collection last year for fans both new and old for the third game’s impending release, and I strongly recommend playing through the previous two games before playing Shenmue 3, as the third installment largely operates under the assumption that you’re very familiar with the story. There is a handy recap video you can watch though, so while Shenmue 3 doesn’t totally leave newcomers out in the cold, it does pick up right after 2 lets off, so the more experience you have with the previous two games, the better your experience with the third one is likely to be. 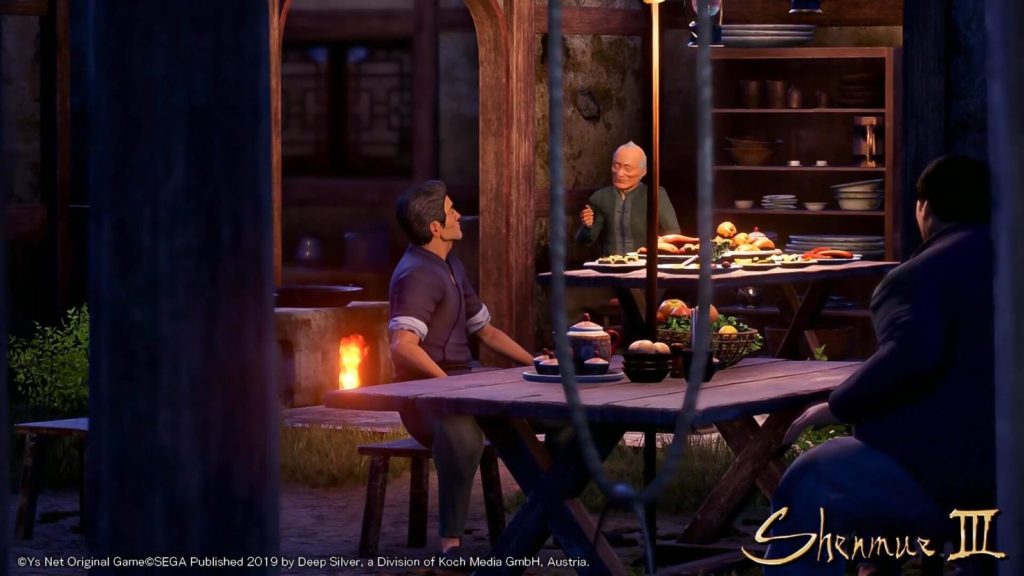 "So while it’s hard to totally let the game off the hook for some these out-dated oddities, it’s also impossible to not have at least some respect for such a deliberate devotion to continuity, modern expectations be damned."

It’s not long after the game starts up when you’re put right back in Ryo’s shoes and you’re running around a small town asking questions and gathering clues. Occasionally stopping to feed yourself and/or indulge in a game, of course. If you enjoyed that gameplay in the previous two games, then you’ll be right at home dusting off that mindset for Shenmue 3. Shenmue’s particular brand of following trails of conversational breadcrumbs to inch your way through a story while occasionally getting distracted by games or side-stories feels pretty much just as it did in the previous two games. In fact, the same can be said about nearly all of Shenmue 3, right down to the wonky voice acting, blocky controls, and long stretches of downtime that only a game like Shenmue can hope to get away with.

While the perpetuation of the various quirks and tropes that the Shemue games are known for will certainly limit Shenmue 3’s appeal for many newcomers, it will probably feel like putting on an old, cozy sweater for those who did connect with the original two, and that is clearly it’s purpose. While many of the game’s core elements benefit from this mentality in a superficial way, it certainly doesn’t do the gameplay many favors during combat, which is fundamentally stiff and repetitive. It also doesn’t help when you’re getting hung up on corners of tables or other objects, often bringing Ryo to a complete stop, or while you’re trying to navigate obtuse menus. Or when you have to stop and hold the left trigger to zoom in on an herb then press an action button just pick it up. And why exactly does R1 have to be the inventory button? Why?

So while it’s hard to totally let the game off the hook for some these out-dated oddities, it’s also impossible to not have at least some respect for such a deliberate devotion to continuity, modern expectations be damned. Ultimately, how much these things bother you will largely depend on your personal attachment to the series, and what you expect from it in 2019. As a Shenmue fan myself, once the nostalgia wore off, I personally found that most of these quirks felt mildly bothersome to straight up annoying at their worst. Nothing ruined my fun of being back in the world of Shenmue, but at the same time, it does create a ceiling for itself in a way by not embracing many of the modern ingredients that open world games of today include to help everything go down smoother. 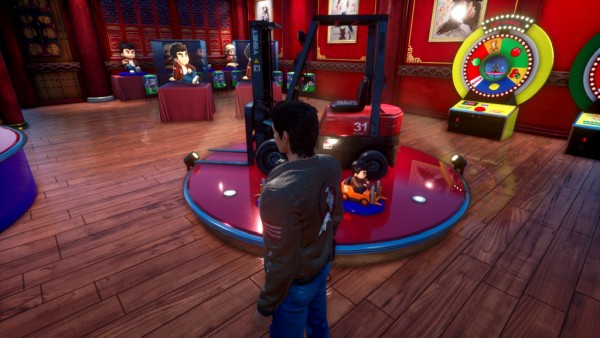 "The first few hours of the game has you running around some very similar looking environments, but rest assured it does open up into a wider world with more variety eventually."

Perhaps the biggest overhaul from the previous two games is, expectedly, in the graphics and overall visual presentation, which did turn out nicely. This is an area where Shenmue 3 couldn’t afford to passively lean on the previous two games quite so heavily, and thankfully, for the most part, Shenmue 3 is notably a huge step up from its predecessors. I’m not sure how much credit the game deserves for this considering how much time has passed since the last installment, but for what it’s worth, it’s nice to see these characters realized on modern hardware. Many smaller movements with mouths and hands are fairly wonky, and frankly the game doesn’t quite look like what most would consider to be “current-gen” but there’s no denying the improvements in draw distance, lighting, and color depth, and what all of that brings to the experience.

It’s often easy to have the vistas of the various areas of Shenmue 3 added to the game’s long list of amusing distractions. Character models are serviceable most of the time, especially for the main characters, although I feel like some of the design styles are inconsistent. The main characters are fairly realistic and have basically normal proportions while some character’s faces look more like they were designed in We Happy Few. It’s not a huge deal but it can be a little distracting. Other than that, the graphics are a nice touch for the series, undoubtedly helped along by the folks over at Deep Silver, who have proven to be quite efficient with the Unreal 4 Engine. The first few hours of the game has you running around some very similar looking environments, but rest assured it does open up into a wider world with more variety eventually.

Shenmue 3’s sound design is also well put together with some familiar voices and a fitting soundtrack that are both sure to hearten long-time fans of the series, but it is a shame that they didn’t really go any further than that with any notable sound effect work or outstanding music tracks. It would have been nice to hear some more in-depth subtle sounds during fights or even while just walking around and picking stuff up, but overall, all the audio that’s here definitely works in terms of sounding like the previous games, and it certainly evokes the right tone, especially with the score itself.

There’s not a whole lot that can be said about the story without getting into spoiler territory, but it is undoubtedly a Shenmue story. Clues lead to bigger clues which eventually lead to revelations, and the process repeats throughout the game. I suspect the ending won’t feel as conclusive as some fans were expecting, but Shenmue has always been a series that is more about the journey than the destination anyway. Much like the gameplay and the presentation, Shenmue 3’s story is more of a love-letter to the fans than it is anything else. And how much that will appeal to you will depend on whether or not that’s what you’re looking for. 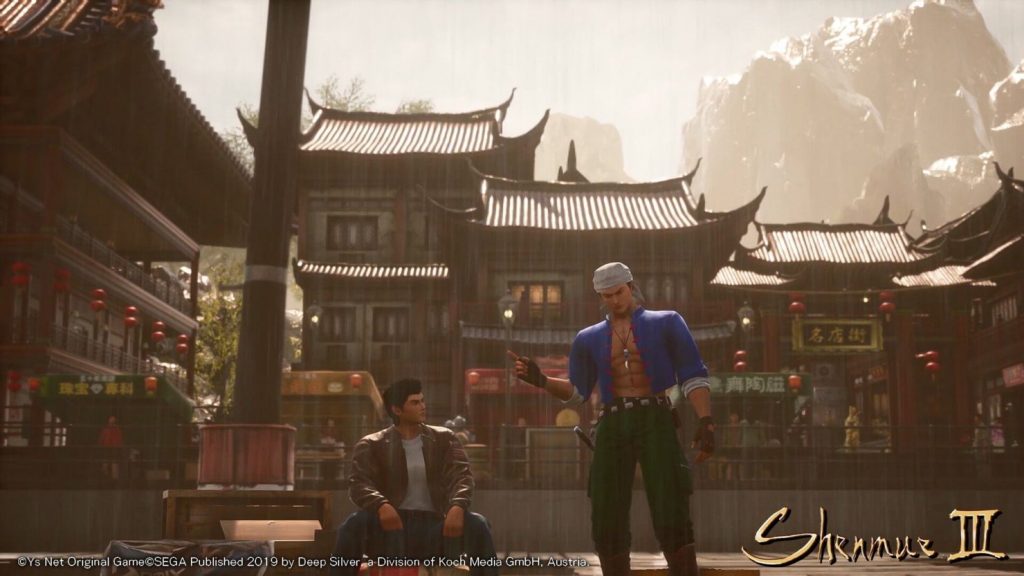 "If you want to play a game that refuses to bend to the will of modern expectations to deliver a more pure fan-driven experience, for better and for worse, Shenmue 3 has got you covered."

Overall Shenmue 3 is an experience that fans of the series are likely to enjoy. Will it bring in many newcomers though? Not nearly as likely. But the game makes it pretty clear it’s not too interested in that anyway. This is a Shenmue game for Shenmue fans, and while much of its gameplay definitely could have benefitted from more modernization in an objective sense, having so many of the essential elements of the original games completely intact like this do give it a sense of purpose and character that most modern iterations of older franchises lack.

If you’re looking for a modern interpretation or an evolution of an older franchise, you’re better off looking at something else. But if you want to play a game that refuses to bend to the will of modern expectations to deliver a more pure fan-driven experience, for better and for worse, Shenmue 3 has got you covered.

The near total lack of modernization will likely turn off new players, some character models' designs are odd, sound design could have been better.

Final Verdict:
GOOD
Shenmue fans couldn’t have hoped for a sequel more compatible with the previous entries. They will immediately feel right at home.
A copy of this game was provided by Developer/Publisher/Distributor/PR Agency for review purposes. Click here to know more about our Reviews Policy.