Soul Hackers was released on the Saturn (which was irrelevant in the west) and on the Playstation (which was, in fact, a haven for JRPGs, even in the west), so it is a bit puzzling why we never got it before now.

However, Atlus has finally brought it to North America in all its glory, in the form of an enhanced port. Nearly two decades separate us from the game’s original release, and even though they have caused it to lose a lot of its superficial luster, the core game design, which probably stands as among the strongest in the series, remains undiminished and as good as it ever was.

Soul Hackers is a first person dungeon crawler with a turn based battle system. Given that it is a part of the larger Shin Megami Tensei cycle, it very obviously features a focus on devils, demons, and the occult and paranormal; Soul Hackers takes these familiar elements and mixes them with a cyberpunk theme.

The resultant story is often bizarre, and at the beginning seems to be downright absurd. However, with time, the game masterfully weaves these clashing themes together and gives us a heavily moving and involved plot, filled with some memorable characters, and some provocative ideas. 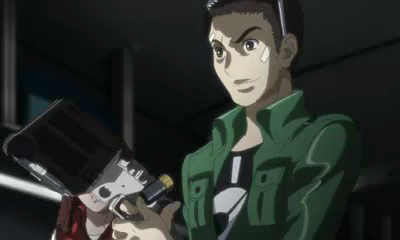 The focus on demons extends beyond just the game’s plot – while demons and demon summoning play a central role in the game’s narrative, they are also inextricably built into the game’s rather unique battle system. As mentioned above, Soul Hackers has a turn based battle system, but it adds so many layers on top of that, it probably ends up getting more stressful than any real time battle system would have.

Like most turn based RPGs, you have to consider your party members, their classes, and their consequent positioning in your battle formation: keep the weaker, support units at the back, let the more aggressive, powerful units fight on the frontlines. In addition, however, you can also enlist and then summon demons that you encounter to fight for you.

When you encounter a demon, you are given the option to talk to it. Depending on the demon’s personality, its predisposition towards you, along with how your conversation with it goes, it will join you. From then on, you have the option to summon it and have it fight for you. 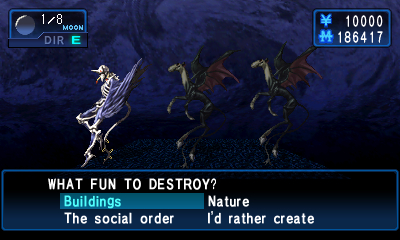 Fighting itself is so immensely complicated. For each party member, you can either choose to direct them, or let them attack themselves (which they then do based on their personality types and their loyalty towards you). In all cases, you need to make sure you are not asking the demon to do something that it wouldn’t want to do, because it might just disobey.

If it does, then it loses respect for you, and its loyalty for you falls. You also need to take into account what phase of the moon it is, because several demons get specific powers based on that as well. Then there are further added enhancements like demon fusion, which add another layer of complexity to it all.

It’s a LOT to take in, and it can get nuts and overwhelming. It perhaps is also leading you to the impression that battles are an unbearably slow paced affair, but surprisingly they are not. They’re almost lightning fast, and most of the times they are over before you know it. You do need to pay attention to what’s going on, though, because as stated above, there’s a lot going on, and it’s easy to lose track.

Thankfully, in a concession to modern players, the game allows you to adjust the difficulty level, and it lets you do it on the fly, at any time, even in the middle of battles, by simply pulling up the Hackers menu (represented by a small Spanner on the bottom screen) any time. 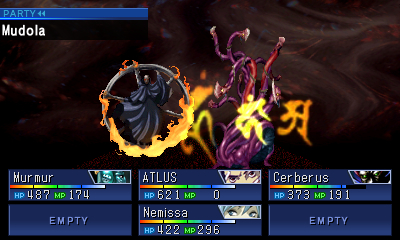 The rest of the gameplay involves old school dungeon crawling in first person, and it’s here that the game’s age begins to show. The dungeon designs themselves get more and more complex, with save points few and far in between, and random battles abound.

Plus visually, the game very clearly looks dated; the Saturn was never a 3D powerhouse, and this game is an almost perfect port of that version. Poor draw distances and some very poor textures seem to be the common problems; the music, too, sounds really dated and old, though it does have a bit of a rustic charm to it.

In another concession to modern sensibilities, Soul Hackers has voice acting, but you will find that it gets grating and on your nerves eventually. Most of the voices are actually fairly appropriate, but as with all Japanese games, the game makes the mistake of ascribing its female characters with irritatingly high pitched voices, with exaggerated emotional responses. Like I said, it’s annoying, but you get the option to turn them off.

All this time has passed since the game was first released, and in many ways, it shows. From a mechanical and technical perspective, the game stands as a window into a different era of game design sensibility; from a narrative perspective, so many of the assumptions and presuppositions that the game makes about computers and what they can do are almost naively sweet.

And yet in the end, if you have any appreciation for uncompromising, great game design, then there is no chance of you not liking Soul Hackers. It’s a great game, with a provocative story, and some excellent mechanics that have, against all odds, stood the test of time.

Dated visuals and sound, grating voice acting, a lot of the game's design sensibilities will completely turn modern players off

Final Verdict:
SUPERB
Age has not dulled the brilliance of this game. If you have any appreciation for uncompromisingly good old school game design, get Soul Hackers.
A copy of this game was provided by Developer/Publisher/Distributor/PR Agency for review purposes. Click here to know more about our Reviews Policy.