Posted By Kartik Mudgal | On 14th, Mar. 2012 Under Reviews | Follow This Author @KartikMdgl 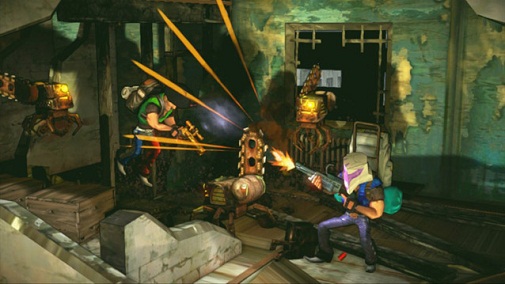 Shoot Many Robots is an, uh, interesting name for a 2D sidescroller. When I first heard of this game, I’ll admit, I brushed it away thinking it will be generic. The market is flooded with 2D side scrolling games, and there isn’t much scope for innovation here, but it’s nice to be surprised. Demuirge studios hasn’t really thought out of the box here, as most of the gameplay mechanics cannot be called new or fresh.

It’s the entire package here that is made so well, and blends in nicely to provide a satisfying gameplay experience. The cell shaded visuals are something I’m very fond of since Borderlands, and it’s implemented quite well here. It’s not overdone at all, and the good animation makes it a bit realistic as well.

The great thing about this game is that it supports 4 player co-op, and that is pretty much the best way to play Shoot Many Robots. Of course, you can play solo as well, but after a few missions, the difficulty curve increases a lot. This is an extremely disappointing thing, as the screen is filled with robots, and when you add missiles in the mix, it becomes a mess of epic proportions. If you know the level well – you can handle it by moving to other areas and never staying idle. 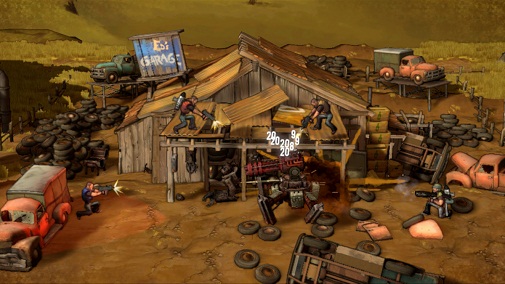 There are a lot of weapons available at your disposal – weak and heavy – mapped to the X and Y buttons respectively. You can also buy a lot of weapons from the points or nuts you gather by finishing each level, and you probably won’t have enough to buy the good ones – there are just so many! You start with a submachine gun, and you can press LT and crouch for better accuracy and manual targeting.

You can also easily switch been heavy and light weapons, and this makes it easier to take out robots clumped together. There will be a lot of robots for you to destroy here, and sometimes, there are heavily armoured ones and bosses too, which take a lot of firepower to go down. You also have an ability to kick back the enemy missiles back for some massive damage. Ah, that reminds me of something.

The sound effects are pretty good as well, and hitting enemies produces a punchy sound, which makes it all the more satisfying. You can also engage in melee combat, but considering the high difficulty spikes, that is not advisable. The levels themselves are quite varied and nicely designed, and the double jump ability comes in handy when fighting bosses or enemies with a lot of armour. The main problem with this game is, sometimes you cannot target enemies well, and that’s a big bummer. The actual gamplay is really fun when you blindfire the hell out of everything, and when you consider the difficulty and the lack of proper shooting mechanics, it can result in frustrating moments. This really drags the game down, but I really did enjoy it a lot. If you play co-op with other people, this is sort of averted a little, as you can use your teammates to distract the robots while you nail them with heavy fire power.

The co-op mode is the redeeming factor in this game, and is absolutely essential that you play it that way. The game is priced reasonably well at 800 MSP or $10, so if you are looking for some mindless fun online then by all means give this game a shot. Shoot Many Robots is a great game and when played with friends, it’s transformed into something that can provide you a lot of entertainment for a while.

Co-op is a great experience. Shooting robots is fun. The animations are good. The level design and the general visuals are pleasant to look at.

Shoot Many Robots is a great game and when played with friends, the game's transformed into something that can provide you a lot of entertainment for a while.

A copy of this game was provided by developer/publisher for review purposes. Click here to know more about our Reviews Policy.
Tagged With: Demuirge Studios, Microsoft, PSN, Shoot Many Robots, sony, Ubisoft, XBLA