Should Sonic Fans be Worried About Sonic Frontiers?

Sonic Frontiers hasn't exactly made the best impression with its gameplay showings- is that cause for concern? s

Even the most ardent Sonic the Hedgehog fanatic should agree that Frontiers’ gameplay footage revealed at the start of June 2022 was a tad rough around the edges. To put it bluntly, reception was mixed; complaints including visual pop-in and sparse open world design blight what should have been a triumphant month for Sonic Team. After all, they’re pinning their hopes on Sonic Frontiers setting a new benchmark for the Blue Blur in 3D, his first foray into open world a conceptual shift as seismic as 1998’s Sonic Adventure, a redemptive sunrise for Sega’s beleaguered mascot.

Sonic Team head developer Takashi Iizuka and Frontiers game director Morio Kishimoto have come out swinging in defence of their latest attempt at a solid 3D Sonic experience, not least in their defiance of the gracefully short-lived #DelaySonicFrontiers campaign, but in providing responses that directly address the growing disquiet surrounding the gameplay reveal. Firstly, the footage shared is from an early build of the game, and consequently any technical shortcomings currently present will be glossed over come Frontiers’ release at the tail-end of 2022. And secondly, the sparsity in Frontiers’ Starfall Islands open world is by design. It’s meant to be wide-open to best take advantage of Sonic’s speedy skills. To help us understand this point, Sonic Team are proposing a new gameplay genre, an interpretation of open world game design they’re coining ‘Open Zone.’ As Kishimoto explains, the footage we’re privy to thus far depicts an explorable overworld – essentially, a playable world map – with linear ‘stage-like elements’ discoverable within.

Sure, it quells hype when a game’s creatives need to bolster its defence months before release. But on the other hand, it’s heartening they have absolute belief in the project, and that play testers are reportedly loving the Open Zone experience thus far. Is Frontiers simply a case of muddled marketing? Does the adage don’t judge a book by its cover apply?

A point of contention is that Sonic Team are touting Open Zone design as revolutionary, when in fact its description resembles the free-roaming nature of Super Mario 3D World + Bowser’s Fury. Heck, it even sounds like Sonic Adventure’s combination of hub areas with action stage offshoots, albeit hopefully without loading screens. Heart Machine’s Solar Ash released last year, whilst not truly open world, is a great example of a seemingly large-scale biome intricately designed to funnel players towards linear paths. In interview, Sonic Team head Iizuka cautions fans on drawing too many comparisons to games that are already out there. Of course, watching Sonic free-roam across mountainous islands is initially going to look like he’s been transplanted into Tamriel, but Iizuka assures us that Sonic’s platforming elements – the loops, speed boost pads, and grind rails – will evolve, transforming the island the more players explore, building gradually into a larger playground.

Whatever Open Zone turns out to be, it honestly sounds a damn sight more interesting than the bland open world depicted in the early build footage, where Sonic wantonly blitzes through verdant plains and non-descript forests, dodging crumbling ruins of a mysterious ancient civilisation. A widespread feeling with Starfall Islands is that as an explorable environment its aesthetic is generic. It pays homage to Breath of the Wild and Shadow of the Colossus a little too closely, as if a conventional open world akin to the kingdom of Hyrule or The Forbidden Plains has been created before Sonic’s archetypal loops and grind rail obstacles have been randomly littered across the landscape. Instead, the premise of tightly designed levels existing within vast open spaces, discoverable by solving environmental puzzles or overcoming robotic enemies, whilst not entirely novel, is a promising design approach. It remains to be seen how spaciousness and linearity can combine without hiccup, but if the recent Nintendo Switch trailer is anything to go by it looks like they’ll meld very nicely indeed. 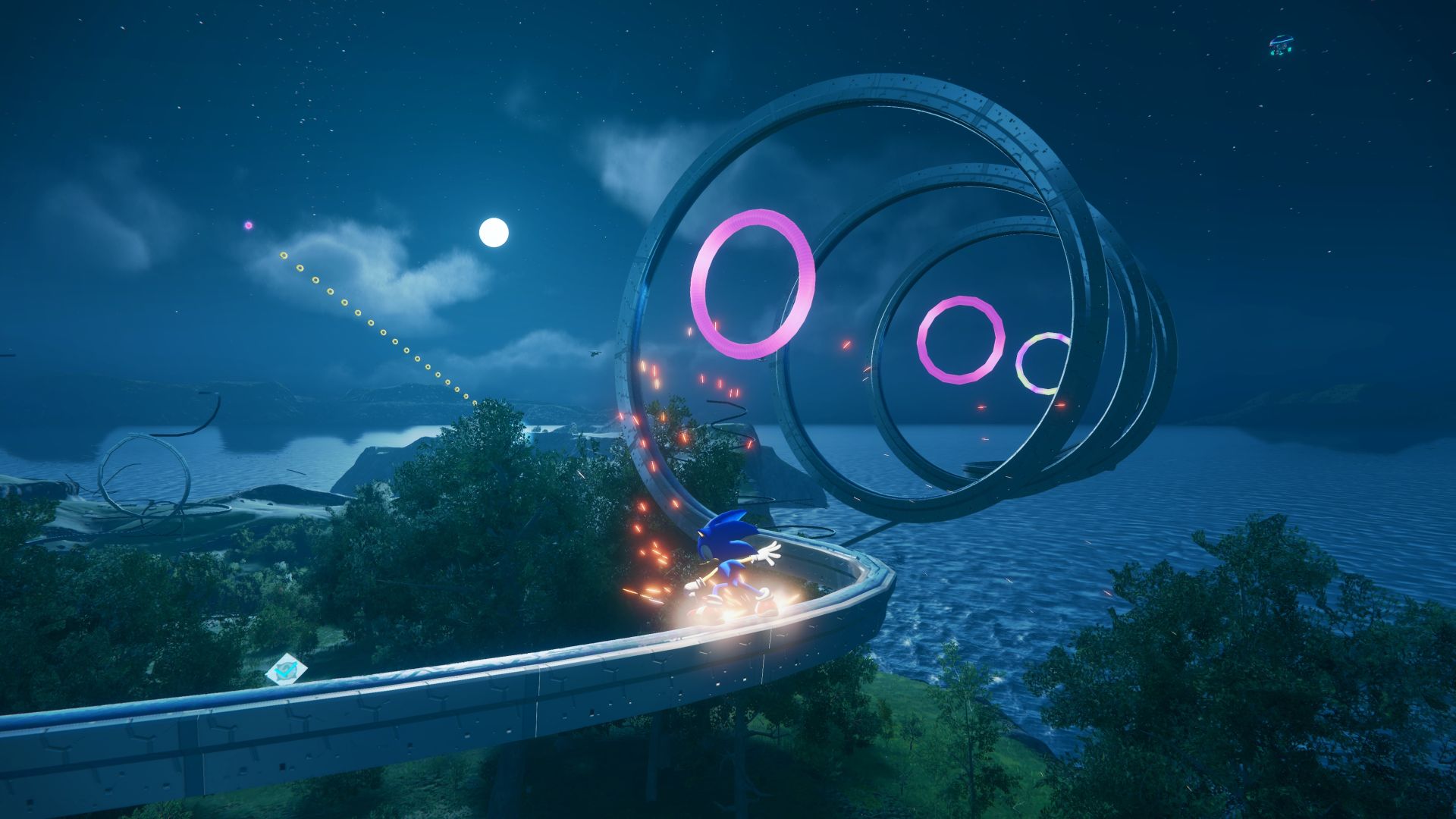 For those who haven’t seen the Switch trailer, we get our first glimpses of these linear stages in action. There’re grassy chequerboard loops and floating platforms reminiscent of Sonic the Hedgehog’s Green Hill Zone, and spaghetti like highways, complete with road signs, car traffic, and – crucially – more than one possible route. If Starfall Islands lacks any memorable or unique visual identity, then these action stages more than make up for it. Sonic’s 1990’s 2D aesthetic is iconic, so it’s wonderful to catch glimpses of this in a fast-paced 3D mould.

These levels exist in a realm known as Cyber Space and are accessible via shrines dotted throughout the Open Zone, presumably left as relics by Starfall Islands’ ancient civilisation the Koco. Frontiers’ gameplay loop then appears to entail Sonic exploring the islands to find and complete challenges and side quests, the completion of which rewards him with Portal Gears that’ll unlock these entrances to Cyber Space. Blasting through the levels therein unlocks Vault Keys that are required to progress the main story.

Whilst exploration and freewheeling traversal are key mechanics that’ll keep players engaged, there’s also an increased emphasis on combat, with enemies now displaying a health gauge during encounters. Sonic’s move set in Frontiers certainly appears more fluid than 3D Sonic titles up to now though; players can take on the game’s roaming robots strategically if they wish, with dodges, parries, and homing attacks that’ll lock onto enemies, with ability to chain attacks together in deadly combos that’ll rack up damage points. There’re also rather colossal mechs roaming the land too, with these encounters of course reminiscent of Shadow of the Colossus’ colossi, or the aforementioned Solar Ash. Whereas taking down the humungous bosses in those games required a combination of skill and cunning from the player, defeating the mechs in Sonic Frontiers doesn’t appear as challenging, at least initially. Hopefully these aren’t rudimentary roadblocks and instead are meaningful boss encounters that’ll contribute to the narrative whilst being rewarding to defeat. The new Cyloop ability, whereby Sonic can run literal rings around opponents, creating a band of shimmering light with which to surround enemies looks fun at least. 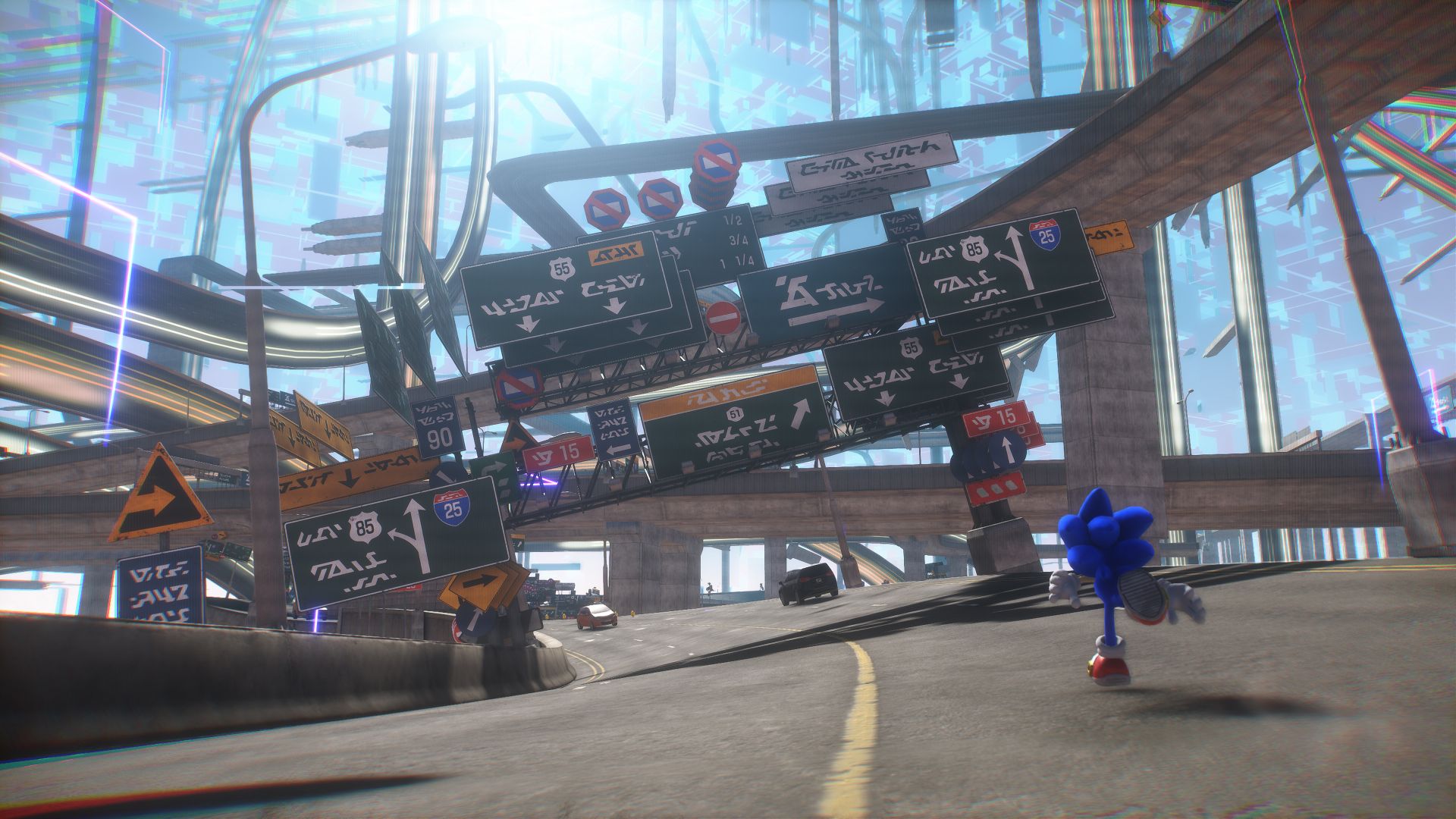 It’s worth saying again that responses from play testers have so far been extremely positive. Fingers crossed Sonic Frontiers will be a game that’ll play much better than it looks. Technical shortcomings aren’t reason enough to be concerned at this stage though as there’s still plenty of time left for the devs at Sonic Team to iron out any kinks before the game is released to PlayStation 4 and 5, Switch, Xbox Series X|S and Xbox One, and PC come holiday season 2022. No, the main cause for concern centres on how Sonic Team will blend all Frontiers’ disparate elements into a cohesive whole. The light RPG mechanics, skill trees, and collectibles typical of open world games haven’t even had a mention in this feature yet, and they’re just one of several new features intended to break Sonic free of the prevailing mediocrity in 3D Sonic titles.

Of course, not everything has been bad since Sonic transitioned to 3D in the late 1990s, but it’s fair to say the series needs a revamp. For all the negativity surrounding Sonic Frontiers so far, there’s also a fair share of cautious optimism amongst the fandom. Sonic Team are genuinely trying something different with Sonic Frontiers; they’re striving for greatness, they’re shooting for the stars, and on a personal note, I really reeeeaaallly want this game to be special. We deserve it. Sonic deserves it.