Posted By Kartik Mudgal | On 21st, Mar. 2012 Under Reviews | Follow This Author @KartikMdgl 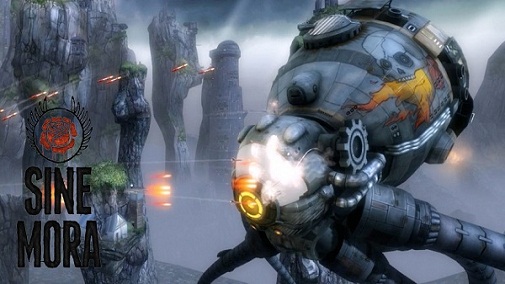 Sine Mora is a Shoot ’em up (Shmup) for Xbox Live Arcade, created by Grasshopper Manufacture and Digital Reality. I wasn’t expecting the game to have such a cinematic flair and expert camera positioning. Needless to say, these things do a great job in immersing you in the game. And what a game it is! It makes a great first impression with splendid audio-visual flair, and once you start the Story mode, you will be surprised to see that the entire thing is in Hungarian. Although, I have to say, it was a pretty unique way of presenting a game.

The writing is top-notch, and before you start each level -sixteen in total- there is a big description that attempts to explain the events that occur. In the Story mode, the game guides you between levels, and you don’t really have the choice of picking any ship, but in case people just want to shoot at things, they can do so in the Arcade mode. Since the game is exclusive to XBLA, it is quite similar to Soldner X2 on PSN, although, it’s in 2.5D. Which means, when the camera keeps changing you can see a lot of spectacular environments. The gameplay is entirely in 2D, though. 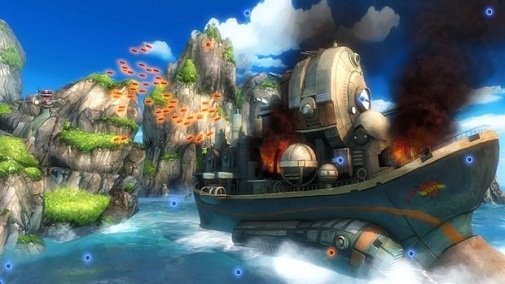 The story can get pretty convoluted especially for people who skip text fast and just try to get into the action, and as I mentioned above, there’s always the Arcade mode for that, but the story here in this game is actually quite nicely told. It can get a little confusing from time to time, because of the voice overs, but with a little patience you can see how brilliant it actually is, and definitely manages to reel you in the game.

The main USP of the game is definitely the visuals and the soundtrack, which has been composed by Akira Yamaoka of the Silent Hill and Shadows of the Damned fame. The music is absolutely phenomenal here, and for an arcade game, it’s really refreshing to see such high production values. No wonder Microsoft is publishing this game, they have an inherent ability of recognizing talent. The game will titillate your ocular senses with its graphics, and the variety of levels  offer here is simply special. 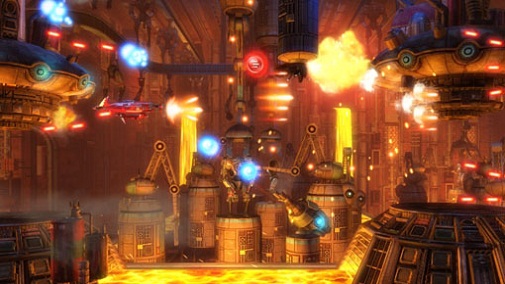 You can also slow down time using a ‘Time Capsule’ and it’s also explained in the story about an Eternal War. Since you will be bombarded with projectiles of various colours, sizes and shapes, avoiding them can become difficult. But that’s the fun part, and makes Sine Mora a fitting representation of its genre. At the end of each level, you will be fighting well designed bosses with creative names. These bosses are designed by Mahiro Maeda, who is a well renowned Japanese Anime creator. Again, the production values of this game is simply incredible.

There are plenty of modes in the game, Score Attack, Arcade, Story mode, and Boss Training. The names are self-explanatory, really. There’s a lot of content and replayability in this game, and this is the reason why it is priced at 1200 MSP. It’s a little on the higher side, but the developers have done justice to the pricing and the game is well worth the money asked. I do have an issue with the game, however, and it’s mainly due to the time limit employed. I can’t really seem to enjoy games that don’t allow me to play as I want, but here it was a bit different. The limit is generous and you mostly won’t have any problems in completing the levels. 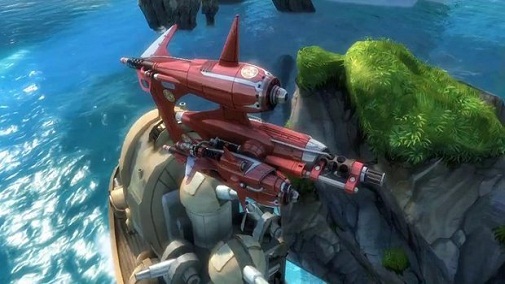 Sine Mora is a really refreshing game, and is one that is created with a lot of love and affection. People who are fans of this genre shouldn’t think twice about picking this one up; it is possibly one of the best Shmups I’ve ever played. The game has fantastic visuals, impressive soundtrack and most importantly, well designed levels and bosses. You really can’t go wrong with this game.

Price may be on the higher side for some. The story is a bit convoluted.

Sine Mora is a really refreshing game, and is one that is created with a lot of love and affection. People who are fans of this genre shouldn't think twice about picking this one up; it is possibly one of the best Shmups I've ever played.

A copy of this game was provided by developer/publisher for review purposes. Click here to know more about our Reviews Policy.
Tagged With: digital reality, Grasshopper Manufacture, sine mora, XBLA