If you are a fan of arcade racers and looking to get a new game that doesn’t break the bank, Skydrift might just be a game worth looking into. Priced at $15 with game play reminiscent of Wipeout, Skydrift takes the arcade racing genre into a territory few have dared tread: aerial racing. Flying in under the media radar, this game is surprisingly fun. Certainly if this game was released a decade ago it would have become a classic to which we would compare other arcade racers to today.

The game in a nutshell is pretty straight forward. You fly your plane through a course littered with obstacles and power-ups. You can hold up to two power ups at a time and freely switch between them, but once you use them up they’re removed from your inventory. If you pick up a worthless power-up, or one that you want to get rid of for whatever reason, you can elect to use up that power-up to help fill your boost gauge. In addition, each power up has a second level if you pick up two of the same power-up increasing the potency of said power-up. All in all the power ups were very satisfying to use and I was rarely disappointed to pick up one or another as they are all valuable and have a specific function that can help you win races.

When it comes to selecting your plane, there are eight separate planes all with varying stats which give each plane a unique feel to its handling. Although you will only have access to two from the start, you can unlock more by playing through the campaign mode. In addition to the eight planes, each plane has four different skins that you can choose from. Some of these skins will need to be unlocked by fulfilling certain requirements either offline or online giving a little extra replay-ability to this arcade title. 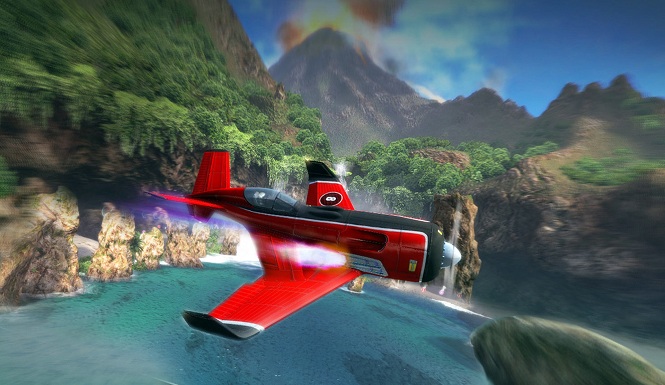 The visuals are amazing!

Unfortunately, one downside is the anemic selection of tracks. I counted six different tracks, with reverse versions of each giving a grand total of 12 possible track lay outs. This is perhaps one of the single most important aspects of a racing game next to controls, and is perhaps this game’s greatest weakness. While three different game modes try to make up for the deficit in tracks, that still only gives you a grand total of 36 ways to play.

In regards to the three different game modes, all three play pretty similarly, but have enough variety to them to make them feel different enough. Power races are the basis of this game and from what I could tell the preferred mode for online play. In power races, you fly through the level picking up power ups that you use to help yourself or blow up the competition. Pretty standard and expected based on the game’s description and hallmark game play. Speed races are another type in which the goal is not to shoot down your opponents and come in first, but rather to fly through the various rings throughout the stage getting progressively faster. This is a race type suited more for experienced Skydrift players as I can personally vouch for the existence of several ‘traps’ within courses that I’ll crash into even at normal speeds. Finally, there’s survival, a game mode where the object is to not be in last. One minute into racing a 30 second countdown will appear. When that countdown reaches zero, whoever is in last place gets eliminated from the race and the counter resets. The careful use of power-ups is especially important in this mode as you want to make sure you have the capability to pull ahead of someone at the perfect moment, or protect your position so you don’t get blown off the course with seconds to spare before elimination.

Multi-player is entirely done online, so you may be disappointed to find out that there is no local multi-player; something that could have really saved this game. The online experience isn’t bad and there are usually a handful of other racers online at any given time leading to a fair wait time from seeking a match to hitting the track. In addition to being able to fully customize your individual races, when doing a series with a group you are given the ability to vote on tracks between races so the majority will be happy and you can have a say in staying away from any problem courses you might have. 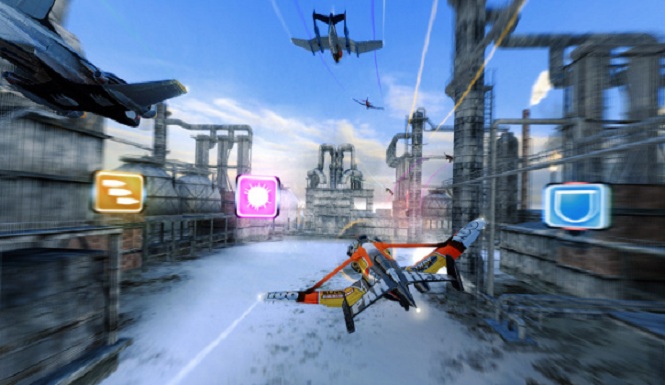 Power-ups mean the difference between victory and defeat.

There are a few other neat features with this game such as the ability to do stunts such as flying at low altitudes to charge your boost meter. This will reward skilled players and help keep those that are truly good at the game in top positions rather than the seemingly lucky random come from behind victories that are rampant throughout other games of this genre. The controls are a little awkward and will take a race or two before you’re used to them. As they seek to emulate proper flight controls, you must remember that down is up and vice-versa. Also, this game is absolutely gorgeous! I was thoroughly impressed with the textures and effects in a title that costs only $15; A shame because if this game had some more content, I could see it selling fairly well in retail stores for $40 easily.

Excellent graphics and a system that rewards skilled players in what is normally a luck based genre.

No local multi-player, and very few tracks might make your foray in Skydrift a short one.

Final Verdict:
GOOD
A fun, cheap arcade racing game that takes to the skies. Skydrift flies the arcade racing genre in a new direction.
A copy of this game was provided by Developer/Publisher/Distributor/PR Agency for review purposes. Click here to know more about our Reviews Policy.