A must play for newcomers.

Bethesda have brought back one of their finest games of all time, The Elder Scrolls 5: Skyrim on current generation consoles. It’s quite amazing that almost five years have passed on since the original was released and yet Skyrim is regarded as the epitome of video game design and role playing mechanics. Having sunk hundreds of hours in the original Skyrim, playing the remaster with the same amount of intrigue is just a testament to how addictive this game is. The remaster brings back the same good old feeling…it almost felt like 2011 all over again.

You take on the role of Dovahkiin, the Dragonborn which instantly gives you powers like Dragon shouts, and you’re the only one that can free Skyrim from the Nordic Dragon, Alduin. However this is easier said than done. This is not due to game’s difficulty but the amount of stuff you can actually do in the game will easily distract you from playing the main campaign. Fighting against a dragon while an epic score is being played in the background really brings the entire atmosphere alive. It’s amazing how the game’s score still holds up five years after its original release.

"Skyrim is what gaming stands for, according to us: Freedom. Be free; do whatever you want and have a lot of fun."

The game begins with you making an adventurous escape from a dragon and making you way to the Jarl of Whiterun. Eventually you will kill one of the dragons and absorb its soul unlocking Dragon shouts. More shouts can be learned by clearing out dungeons or completing side mission and the main campaign. There are a ton of dungeons in the game, each intricately designed with enough puzzles, enemies and mysteries to uncover.

The game also features a comprehensive leveling up system allowing you to upgrade several parameters such as  Destruction, Restoration, One-handed, Smithing, Sneak and more. Unlike the previous entries in the series Skyrim underwent major changes in the way it handles its combat and it’s great to see that it’s very much intact in the remaster. You can be stealthy or use magic to take our your enemies or use a combination of everything to get the job done. You can also recruit companions but they can be annoying due to their dumb AI. Further customization includes creating your equipment through blacksmiths or developing your own potions through alchemy.

The game’s world is massive so be ready to spend tons of hours in it if you did not got the chance to play the original. It’s literally amazing that after investing over 200 hours into the original, the remaster still feels so fresh and intriguing. The music accompanies the atmosphere extremely well and the game’s updated visuals goes a long way in creating a vibrant experience, specially for new players. 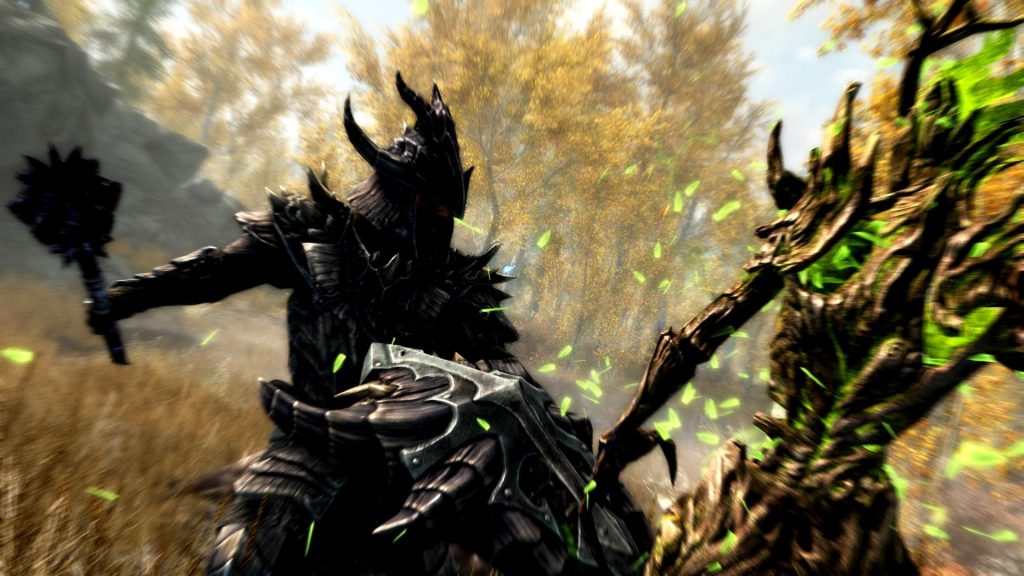 We played this game on the PlayStation 4 and there are a ton of differences compared to the PS3 version. Better performance, increase in foliage density, high resolution textures, improved lighting and much more. This is a remarkable remastering effort by Bethesda and although they haven’t changed and updated every nook and cranny of the game, it’s still an admirable effort given the scale of the world. However minor performance issues (at least early on) and some of the dumb AI/glitches are still present but at this point they have become so attached with the internet culture, Bethesda wouldn’t care to fix them, right? On a more serious note, bugs and glitches still rule the roost here. Frequent clipping, character weird movements and the good old ludicrous horse physics are all pretty much intact here.

Besides the visual upgrades, Skyrim on consoles features mod support. Although the basic installation is rather easy, the amount of mods on the PS4 are pretty low. On the Xbox One, there are already over 100 mods. We expect this to change over time but PS4’s file size limitations make some mods impossible to support. The PS4 version’s space for mods is limited to just 1 GB, while the Xbox One has 5 GB reserved for the same. This immediately gives the Xbox One version the upper hand as far as mod support goes and it’s rather disappointing to see the PS4 version suffer a due to this. 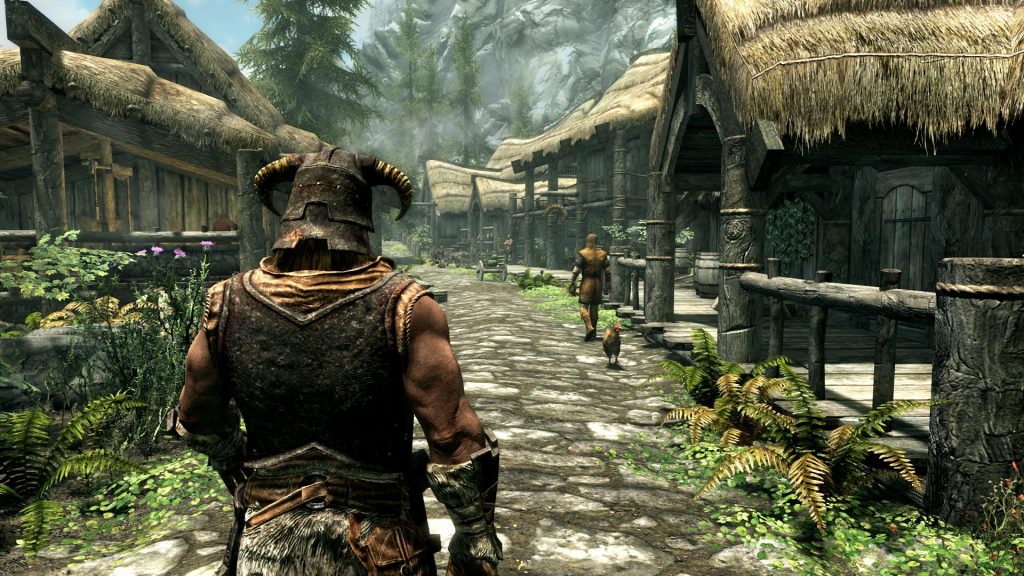 "The PS4 version’s space for mods is limited to just 1 GB, while the Xbox One has 5 GB reserved for the same. This immediately gives the Xbox One version the upper hand as far as mod support goes and it’s rather disappointing to see the PS4 version suffer a due to this."

Once you are done playing the main game  (which will take ages!), it’s now time to take on some reasonably good DLCs for the game. The remaster, as expected comes along with all three pieces of downloadable content: Hearthfire, Dawnguard and Dragonborn. Hearthfire is disappointing with its adopting and home building system still feeling archaic. Dawnguard suffers from rehashing the same locations along with unimaginative quest lines on the vampire’s front. Fans can look forward to the ability to turn into a vampire but that is the most you are going to get out of Dawnguard. And finally, Dragonborn,  which is perhaps the best DLC out of the three. Dragonborn sees you follow the quest-line of the original Dragonborn, the Dovahkiin Miraak. After Miraak turned evil, he was banished to Oblivion, and he is now trying to return to Tamriel. While the story fails on several occasions, the variety in quests and dragon riding never gets old.

Skyrim was one of the defining games of 2011, and if you are an RPG fan, do yourself a favour and pick up this remaster. It’s absolutely a no brainer if you haven’t played the original. Skyrim is what gaming stands for, according to us: Freedom. Be free; do whatever you want and have a lot of fun.

Impressive remastering, intriguing gameplay, huge world to explore with tons of things to do, includes all DLCs although Dragonborn is the only one which is worth your time.

Final Verdict:
AMAZING
The legendary role playing game is back on current generation consoles and it's a must play if you haven't already played it on last generation hardware.
A copy of this game was provided by Developer/Publisher/Distributor/PR Agency for review purposes. Click here to know more about our Reviews Policy.