When I first played Sniper Elite V2 on the PlayStation 3 in 2012, I was enamored with the franchise’s signature bullet cam that displays the sniper bullets piercing their fleshy targets in graphic, gut-wrenching detail. Bones crunched and countless hard-to-watch organ shots ensued. There was a lot of fun to be had watching these gruesome deaths, but within a few hours, the otherwise stiff gameplay and poorly-implemented mechanics wore on me and led me to retire the game fairly early on.

Years later, a remaster no one asked for has arrived to bring the game to modern consoles, but not much has changed beyond some enhancements to the graphics. Sniper Elite V2 wasn’t very pretty to begin with, and although the upgrade to 4k and HDR is an improvement worth noting, it doesn’t magically improve the dated visuals in any drastic way. Dynamic lighting and improved particle effects are welcomed, and I noticed some hefty changes to the game’s character models. Still, the game is several years old, and it shows. Since the only other notable addition to the remastered version of Sniper Elite V2 is an average photo mode, it’s a shame the visuals aren’t more impressive to showcase players’ best moments. 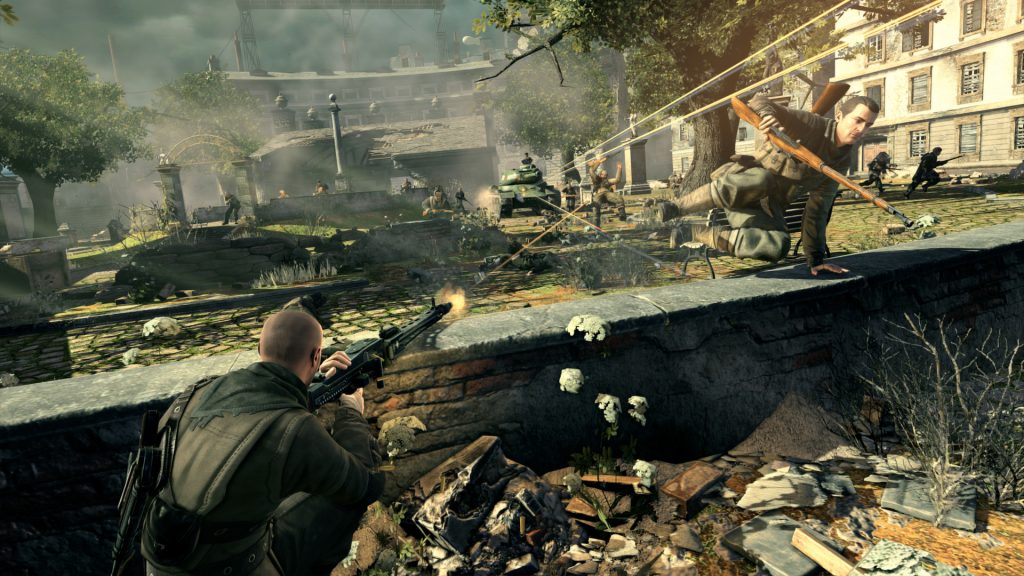 "The game’s best feature is its primary one – sniping. There’s a lot of attention paid to this element of gameplay that works really well."

Beyond these traditional remaster improvements, Sniper Elite V2 is the exact same game it was seven years ago. Players are placed in the shoes of Lieutenant Karl Fairburne and given the task of running down and taking out German scientists before Russian operatives capture them. The setup is a run-of-the-mill WWII story switched up just enough to make the sniping gameplay logical, and our hero follows suit by being as generic as possible. Still, there’s enough intrigue here to propel players into the conflict and give them purpose for putting bullets through as many skulls as they can.

The game’s best feature is its primary one – sniping. There’s a lot of attention paid to this element of gameplay that works really well. My favorite detail is that the game ties your time-slowing ability to your heartrate. Running even short distances can raise it exceptionally high, and since slowing time is very important to lining up great shots, there’s a fun bit of risk and reward involved in managing the meter. Beyond that, you can expect to spend a lot of time adjusting for drop distance and wind as you line up perfect shots.

It can be a truly mathematical endeavor that makes you feel like a real sniper as you’re perched atop a crumbled building working out the specifics before taking pulling the trigger. And thanks to the aforementioned brutal and satisfying bullet cam, many of those shots will result in grotesque slow motion bullet entry. You don’t just get to watch the bullet penetrate and leave the body; the game will switch to x-ray vision to showcase the enemy’s insides and allow you to stare in awe as you explode various bone structures and organs. If you’ve got a weak stomach, Sniper Elite isn’t a franchise for you. But if you’re intrigued by watching a bullet enter a face and utterly decimate a person’s jaw bones into a thousand fragmented pieces, well, I think you may have found your game. 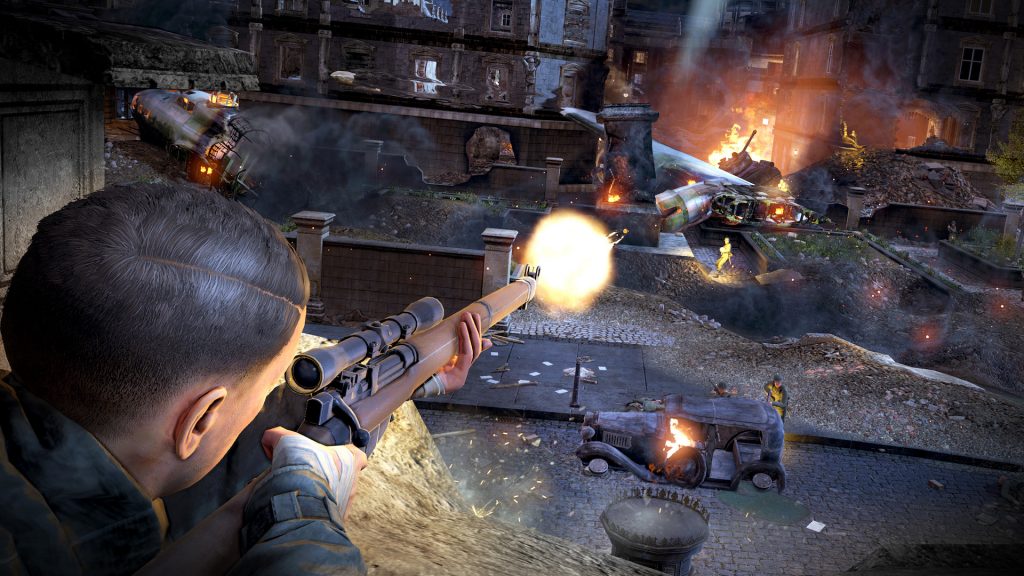 "You can take a shot and move to a new position to leave enemies searching for you, but because the AI is so irregular and varies from running right at you with reckless abandon to searching endlessly to no avail, there’s not much consistency to rely on."

The remainder of the game is a mixed bag of passable gameplay mechanics and downright awful ones. There’s the expected genre option of stealth killing via silenced pistols or melee, but Sniper Elite V2 gives you plenty of more unique ways to complete your objectives using various tools and a bit of creative thought. You can do things such as lay landmines and tripmines before luring your prey into them with a rock throw, take non-lethal shots at your enemies to lure others to their position, or shoot gas tanks on vehicles to leave chaos and death in your wake. And if all else fails, you’re given dynamite, grenades, and automatic weapons as backup for when things get hairy.

It’s a shame, however, that these backup mechanics undermine some of the best aspects of the sniper genre – true stealth. Sure, I understand that a sniper shot draws attention, but the loss of the element of surprise often turns the game into a traditional third-person shooter, especially during the second half of the game. Worse yet, the AI struggles to keep up with the game’s jump from deliberately-paced sniping experience to frantic shooting gallery. You can sometimes time your shots with background sounds, but the unpredictable enemy detection means that sometimes they hear them anyways and come charging at you. Hell, sometimes they just suddenly and randomly know precisely where you are without you so much as moving, making for some outrageously unfair and unexpected deaths by sheer numbers.

You can take a shot and move to a new position to leave enemies searching for you, but because the AI is so irregular and varies from running right at you with reckless abandon to searching endlessly to no avail, there’s not much consistency to rely on. More often than not, a few solid hits was all I’d get off before the enemies would begin to swarm me and prompt me to bring out my automatic weapon for a full on battle. These battles often hilariously devolved into me watching enemies stare directly at me as they shot a nearby wall over and over, and other times they’d run in literal circles searching for me as I stood in the wide open watching them. My favorite was how often they’d run to a spot and go prone facing a wall as I stood there in plain sight. Of course, when they weren’t being dumb, they came at me like bats out of hell and completely obliterated me. 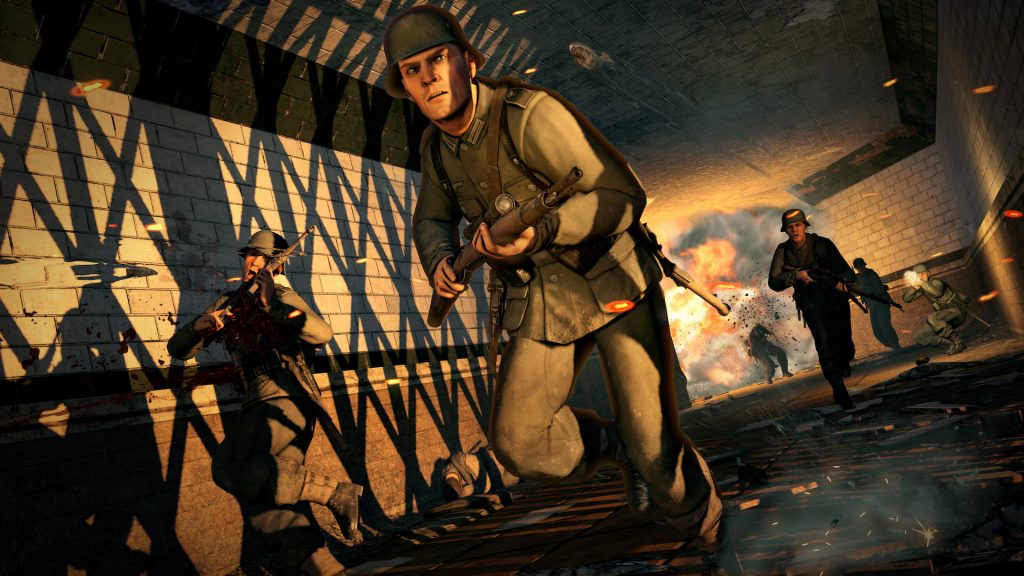 "Solid sniping mechanics and gory bullet cam deaths are endlessly exciting, and I had a surprising amount of fun at times, but pushing through its 8-10 hour campaign comes with a lot of frustrations too."

This is made worse in the more straightforward corridor levels that basically demand you pull out that automatic gun and go in guns blazing against such capricious enemies. Don’t get me wrong – there’s nothing overtly bad about these segments, but in a game clearly designed to appeal to gamers who love sniping, it’s a bit of a letdown when you’re forced into small aisles and required to either use an SMG or use your sniper like a shotgun, even if the latter of is admittedly pretty cool and made me feel badass.

The various difficulties can sometimes make things even more frustrating. The easiest mode allows you to take quite a beating before going down, but the highest difficulty showcases the absolute worst in the AI and gameplay imbalances. If you’re unable to rapidly calculate for wind and drop distance precisely, you might as well be dead before you even fire a single bullet. Enemies will rain down on you and wipe the floor with your corpse before you can so much as think. It also removes some of the easier mode’s options like the very helpful aim assist and the ability to tag enemies to keep up with them. All of this adds up to unbalanced difficulty whichever way you swing things, further leaving Sniper Elite V2 feeling inadequate .

The later games in the Sniper Elite franchise have elevated the franchise to above average and made significant quality-of-life improvements to its core gameplay loop, so I’m let down that the developers didn’t take any of that into account when remastering the game that brought the series more mainstream. Plenty could have been done to make Sniper Elite V2 stand out, but all we’ve got here is the same clunky entry that we had in 2012. Solid sniping mechanics and gory bullet cam deaths are endlessly exciting, and I had a surprising amount of fun at times, but pushing through its 8-10 hour campaign comes with a lot of frustrations too.

Sniper Elite V2 Remastered is a conflicted game. It’s one part phenomenal sniping experience and one part clunky, run-of-the-mill third-person shooting gallery full of awful AI. If you’re able to overlook its glaring faults, there’s fun to be derived from its attention to realism in its sniping and its brilliant bullet cam gore, but overall, this one’s best left in the past.