There is an abyss to gaze upon in SOMA but it may not be what you think.

The question of who you are has been on the surface of mankind’s collective mind since it was capable of thinking. Is it your humanity and relation to the rest of the world that makes you who you are? Is it what you do and the thoughts that make up your collective reasoning? Or is it something more that exists way beyond the limits of thought in a world devoid of meaning and fraught with the big, dangerous unknown? Three simple words: Who are you?

In that regard, Frictional Games’ SOMA is as different from its initial outing, the classic Amnesia: The Dark Descent, as could be. Though both games employ a heavy amount of mystery and outright keeping players in the dark, they’re thematically so far apart it’s amazing – even though a good number of gameplay elements will be familiar. You play as Simon Garrett, your average everyday graphics designer who suffered brain trauma from a car accident which took the life of his friend Ashley. Garrett is heading for an experimental brain scan of sorts with Dr. David Munshi but after placing an odd headset on, Garrett awakens in PATHOS-II, an underwater research facility covered in darkness, black technological sludge and heavy handed sounds everywhere. 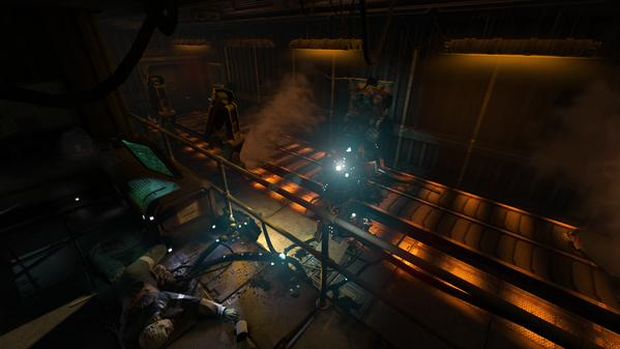 "SOMA doesn’t beat you over the head with these questions as much as it themes incite as much."

From the outset, this setting is as alien to Simon as it is to the player. Odd distortions accompany his vision in certain situations and it’s not long before he encounters the machines, monstrous staggering entities which seem to be out to get you. Of course, there are other machines, particularly sets of robots which believe themselves to be human despite their obviously non-human appearance.

Without spoiling the entire story, suffice to say that it questions what it means to be human. Not everything is black and white and even the varying shades of grey don’t paint the “ideal” picture for humanity. Then again, even when keeping progress or survival to the side, what about the philosophical implications of human-like robots? Can one’s personality survive beyond the shell they occupy? What are downsides to this and how does it affect who you are in this moment in time?

SOMA doesn’t beat you over the head with these questions as much as it themes incite as much. There are quiet moments of terror for sure, whether it’s exploring the ocean floor or trying to make sense of your surroundings, but it’s those moments of contemplation as you try to piece together everything that’s happening that are really insightful. 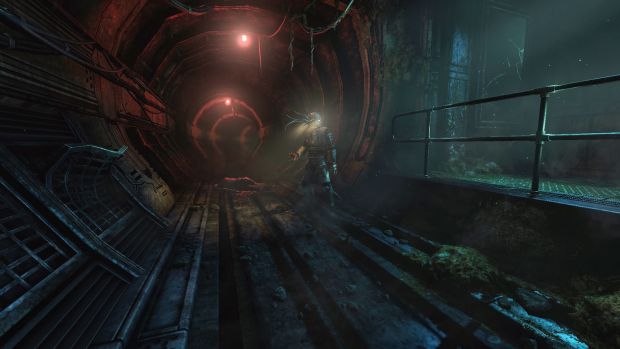 "SOMA’s terror easily takes a back seat to its ideas at the end of the day and Frictional Games has put an impressive level of effort to bringing the world of PATHOS-II to life."

At times, they can feel like an annoyance as you contemplate how to sneak around them and do what you have to do. I found it slightly odd how a machine didn’t kill you outright, instead leaving you in the same space with a slight bit of health and some time to run away. Nonetheless, despite how typical such cat and mouse encounters have become, especially with the number of first person horror titles since Amnesia’s release, I found them to be enjoyable for the most part.

The puzzles, on the other hand, served to confound me more than once. In the beginning few hours itself I couldn’t figure out what I had to do next when it came to evading a machine and activating the hatch which would grant me access to the radio tower upstairs. I’m fairly certain this is my own ineptitude so your experience may vary but it doesn’t quite help the pacing and the aura of mystery and terror when you’re running around, trying to figure out what to do next.

SOMA’s terror easily takes a back seat to its ideas at the end of the day and Frictional Games has put an impressive level of effort to bringing the world of PATHOS-II to life. Lighting effects range from simple to intricate but it never feels overblown. The design of the facility itself is unique even as we’ve spent years now exploring derelict, sci-fi laboratories inhabited by creepy crawlies. One particular favourite touch was the melding of the machine-like goo with different structures and in some cases even individuals. It helped to convey the feeling of dread without outright telling you what’s going on (and rest assured, there is a purpose behind it). 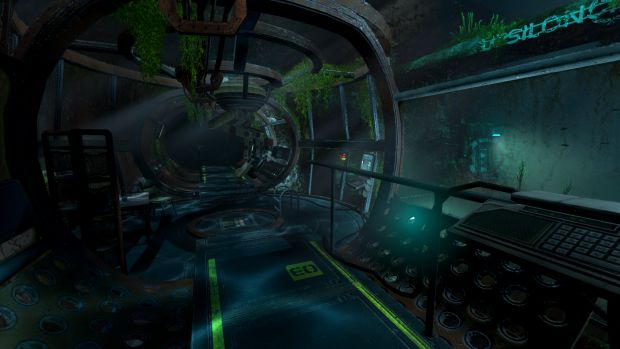 "I would probably argue that SOMA is more memorable with its story and themes even if the stealth and horror sections are fairly by the numbers."

The audio is also top-notch, be it in the voice acting – with Simon Garrett being likeable and convincingly frightened but without going over the top in the process – or in the environmental sounds. Be careful when playing in the middle of the night with headphones, because you’ll swear the environment is twisting itself into a shape meant to kill you.

I would probably argue that SOMA is more memorable with its story and themes even if the stealth and horror sections are fairly by the numbers. Then again, just as you won’t forget having to torture a machine-like human to progress, I doubt the memory of the Shadow rushing towards you, breaking down doors in its path will fade any time soon.

SOMA is a very good game, even if you’re not into survival horror. The overall scare factor pertains mostly to its atmosphere with the environment and sound design further amping up the terror as you progress. It clocks in at roughly 10 to 11 hours if you know what you’re doing (for the most part) and despite some pacing issues and troubles with puzzles, it’s well worth every minute. Whether you’re a fan of Amnesia: The Dark Descent or first person survival horror or just enjoy a deep, meaningful story who’s themes extend beyond the confines of a simple video game, SOMA is worth a look.

Excellent atmosphere that is as unique in the horror it instills as the philosophical questions it poses. Great story and an intriguing cast of characters. Strong visuals and sound design. Environment feels unique and frightening.

Puzzles can be a little confounding at times. Gameplay mechanics and sneaking around monsters doesn't feel as fresh. Pacing could be a little better at times. Setting may be overtly familiar at this point.

It may not strike the same level of outright terror that Amnesia: The Dark Descent but even in this genre, SOMA is a standout title with an interesting storyline centered around the age old debate of being human.

A copy of this game was provided by developer/publisher for review purposes. Click here to know more about our Reviews Policy.
Tagged With: Frictional Games, pc, ps4, soma