I’m generally sceptical of kid-friendly racing games (aside from Mario Kart of course.) I’m also very cynical when it comes to newer Sonic games. My apprehension toward motion controls also precedes me, so when this holy trinity manifested itself in the form of Sonic Free Riders I was initially rather concerned. After a rocky start I actually found myself starting to enjoy the rather quirky charms of Sonic Free Riders and, provided you can put up with looking like a knobber riding an imaginary skateboard, I’m sure you’ll learn to enjoy it as well.

The old adage “start as you mean to go on” doesn’t apply at all to Sonic Free Riders. A boring tutorial with a really poorly voiced flying mechanical Chao is off-putting enough, but the controls start of as being quite irritating. You stand side on to the Kinect unit as if you were riding a skateboard and lean forwards and backward to turn right and left respectively (though naturally this is reversed if you ride in a goofy stance.) All other actions are controlled with your body, such as jumping and doing tricks, kicking off the ground for a speed boost and throwing weapons at your adversaries. The controls generally work quite nicely and the Kinect sensor responds well within the game, but the initial few hours of getting used to the turning mechanics are a bit of a slog. There is also the problem of the camera occasionally getting confused in the two player modes. This wasn’t always the case, and I’m sure it was more a spacing problem than anything else, but it was worth noting that the game occasionally confused which player was which. The motion sensing problems also extend to the menu controls that took far longer to navigate than was necessary. There is the option to control the menus with voice commands but, even if you could remember all the specific phrases required to work your way through it all, the speech recognition was always patchy at best. 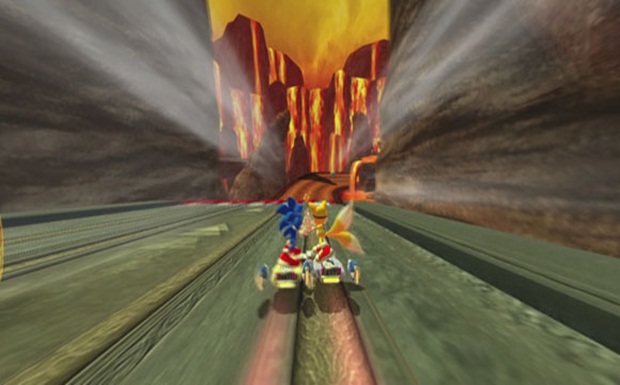 Make sure you feel comfortable with your tag race partner, as you’ll be holding hands a lot

Once you come to terms with some of the eccentric aspects of the controls, you’ll find that there is a lot of depth and content within Sonic Free Riders. For a start there are a huge range of modes to choose from ranging from the mission based story mode, right through to some of the weird and wonderful multiplayer modes. The relay race was a particularly good move and, as you might have guessed, involves you racing a lap or two of the race and then swapping out with another player. It plays out in a fairly by the numbers manner, but it’s a fantastic mode if you want to have more than two players involved at once. The more creative of the multiplayer modes was the co-op tag race. It sees you and your partner tethered together as you race, and you can do some cool co-op moves or split up to get new rings and items. It took a while to get used to the bizarre nature of the mode, but once you get the hang of it satisfaction is guaranteed.

I was also intrigued by the collectibles that you obtain mid-race. Aside from the usual entourage of tools and weapons you use to sabotage your foes, you can also collect rings that will power up your board for the rest of the race if you collect enough of them. It adds a certain depth to the proceedings and really makes it worth hunting down those secret routes in all the maps. These secret routes and alternate paths are present in nearly all of the courses in Sonic Free Riders and keep them all fresh, even after multiple play-throughs. The fact that there are a tasty fourteen maps on the disc also means that you probably won’t tire of them any time soon. 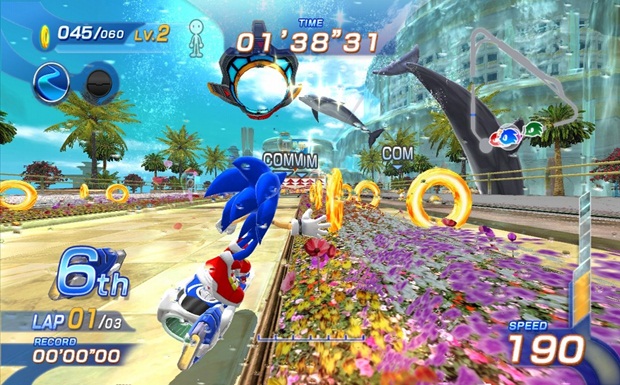 Despite a rocky start, the motion controls made a lot of sense to me after a while

There are also quite a varied selection of vehicles to choose from, each with different strengths and weaknesses. The alternative to ride bikes instead of hover boards is also interesting and it really changes up how you need to control the game. You can buy new vehicles with the rings you collect during your races, but you can also buy new skills that you attach to your gear before every race. This was one of the more interesting mechanics of the game, allowing you to attach two skills to either side of your board. You then activate that skill by changing your stance to point that end of the board to the front. You could have a power skill equipped to break through obstacles, but then change your stance around to activate better acceleration on the final lap. With all this content on disc my only problem came in the distinct lack of characters available to begin with. You can unlock reasonable roster as you progress through the game but, considering the variety of modes, vehicles and skills available straight from the word go, this seemed like an odd area to suddenly be stingy with.

Much like the gameplay itself, the presentation is generally rock solid but requires you to put up with a few irritants. For a start the graphics are properly decent in a shiny cartoon-like sort of way, with some really nice animations and lots of attention to detail in how the levels are visually designed. My main problem came in how the sound was used. They made the rookie mistake of trying to make Sonic far too “rad” leading to some annoying pop rock soundtrack music and some offensively lame voice acting. Do yourself a favour and make sure you skip the cut scenes. 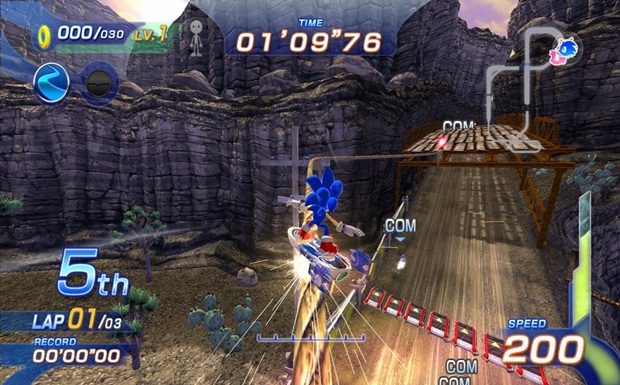 The courses are well designed, both aesthetically and, in terms of gameplay

Sonic Free Riders is, quite ironically, one of the few non-casual titles available for Microsoft’s Kinect. It seems odd at first that you can’t just jump in and get to grips with it instantly. This is because it is much like the games we usually play with normal controllers. You need to learn what button activates what function and how this changes the game. Sonic Free Riders is a wolf in sheep’s clothing as it poses itself as a casual game, but it’s actually one of the more in depth titles available for Microsoft’s new motion controller. If you can forgive some of its more annoying elements you’ll find the depth of content on offer in Sonic Free Riders very enjoyable indeed.

Poor selection of characters, Can take a while to learn controls, Motion detection can be sloppy in two player, Terrible voice acting, Annoying characterisation

Final Verdict:
GOOD
I was tempted to write it off as another cash in on the declining Sonic franchise, but once you learn its ins and outs Sonic Free Riders becomes a charming title that is a great attempt at a solid racing game for Kinect
A copy of this game was provided by Developer/Publisher/Distributor/PR Agency for review purposes. Click here to know more about our Reviews Policy.