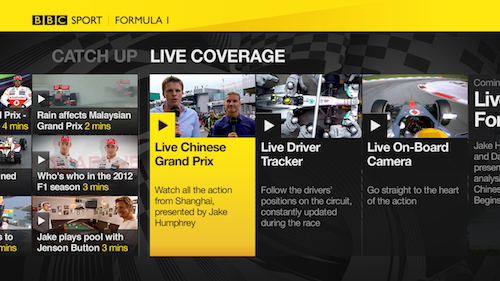 Sony, in a joint venture with the BBC, today announced the release of a BBC Sport app on the Playstation 3 in time for Wimbledon 2012.

Being dubbed a ‘killer app’ by Sony, it will provider consumers with live streams of BBC sporting events such as Formula One and Wimbledon, as well as 24 seperate live streams of Olympics coverage.

It plans to be an ‘easy-to-use’ service that offers programming ‘over and above’ what’s currently available on free-to-air channels.

Designed specifically for the ‘big-screen’, its purpose is to cater for sporting events with multiple activities, events or camera angles for an authentic front row experience.

During the Olympics, the BBC Sport app will provide over 2,500 hours of content, all in High Definition.

In addition to the Playstation 3, the BBC Sport app will also be making its way to 2011 & 2012 Internet Enabled BRAVIA televisions.

Edd Uzzell, Sony category development manager for BRAVIA, believes the launch of BBC Sport app is one of the most exciting developments for the Sony Entertainment Network.

“Televised sport is one of the biggest rating wins for broadcasters.  This truly is a killer app and will provide a substantial amount of additional sporting content that you can’t get through the current broadcasting model.  We strongly believe this will kick-start more widespread usage of the connected television offering, providing sport fans using the app with in-depth big-screen coverage of their favorite events.  The app will also have extensive penetration in the UK thanks to its availability on PlayStation 3” says Uzzell.

The app will launch some time before June 25.