First off this is my first review of any Sony Minis titles and secondly these are definitely meant to be played on the PSP, although playable on the Playstation 3.  I would do these as separate reviews but that is certainly not necessary even though they are different types of games. These game would be lucky to have made it on a cell phone game made in the year 2000.  The graphics and controls are as bad as an arcade game is going to get. 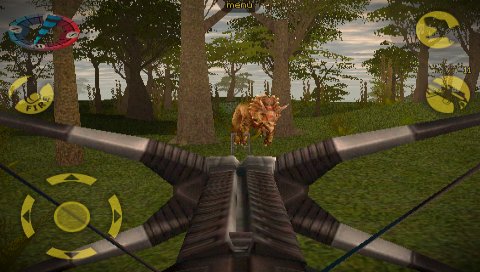 Let’s start with Carnivores: Dinosaur Hunter as you quite obviously hunt for dinosaurs.  Now I might have been a little harsh on how bad the graphics are in the intro, but they are nothing to brag about as there are TONS of games for the PSP that have graphics that blow both of these games away.  Now hunting dinosaurs sounds fun as you can use a pistol, crossbow, sniper rifle and more but it just doesn’t quite get you into it.  After a few minutes of searching for a dinosaur that you specifically pick to hunt before the level starts, you start to get bored really quick as you can’t find the dinosaur you need to kill.  Then you forget which dinosaur you were supposed to be hunting and start killing everything.  Your then out of bullets and couldn’t kill the dino you needed to even if you found it.  Maybe I am just putting a scenario up here but I would expect a lot more from the PSP. You start off a beginner hunting easier pray like herbivores and the then make your way up to the more dangerous carnivores. These meat eaters can smell you a mile away, but in windy areas you can’t take advantage. Shooting my guns sounded like a BB gun and it takes some getting used to aiming.

Moving on the Normal Tanks, where it is a top view game while you control a tank.. and I don’t know what is so normal about it. I mean you do get missiles and a machine gun but the title still boggles my mind. The game is very complex, you see, you must blow up everything in your path with out getting hit. It might take a genius to understand it. Normal Tanks was actually released for the PC a while back, and I mean a while. The heavy metal midi soundtrack for the game brought me back to the days of Doom which was cool. 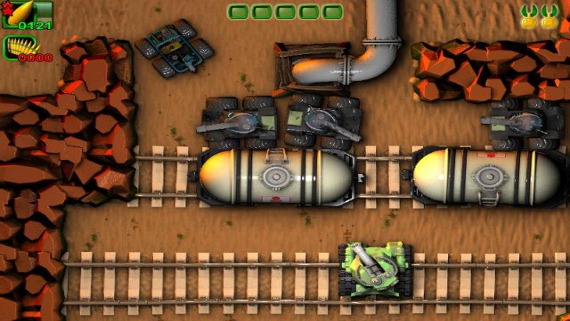 All in all we here at GamingBolt don’t usually review games like this so the bottom line is that it far from being up to par with any type of game on any console in this generation, but the size and ability to download the game for cheap is a plus. Carnivores: Dinosaur Hunter costs $3.99 while Normal Tanks costs $2.99. Now the size of these game are so small that if that is a problem for you, then these games might be worth it for you as these games are never over 100MB. If your not worried about memory space, I would spend your money on something else.

Can be played on the Playstation 3 or PSP. Size is under 100MB.

Graphics are not good period. Although the small size of the game, now a days people are not worried about memory. Boring to a degree, unless you have a lot of patience.

Final Verdict:
POOR
Two games that I would pass on, with bad graphics and a price tag that is not fair. Hunting Dinosaurs and Tank warfare can be enjoyed in a much more fun and money saving way.
A copy of this game was provided by Developer/Publisher/Distributor/PR Agency for review purposes. Click here to know more about our Reviews Policy.