Ah, the PlayStation Move. It’s quite refreshing to see new software for it at this stage in its life cycle. On a second thought… no. Who am I kidding here? Sorcery, the game which lets you play as a Wizard, should have been out last year itself when public interest in Sony’s motion controller was high. But nothing can be done about that, though. The point is, Sorcery is a damn good game. 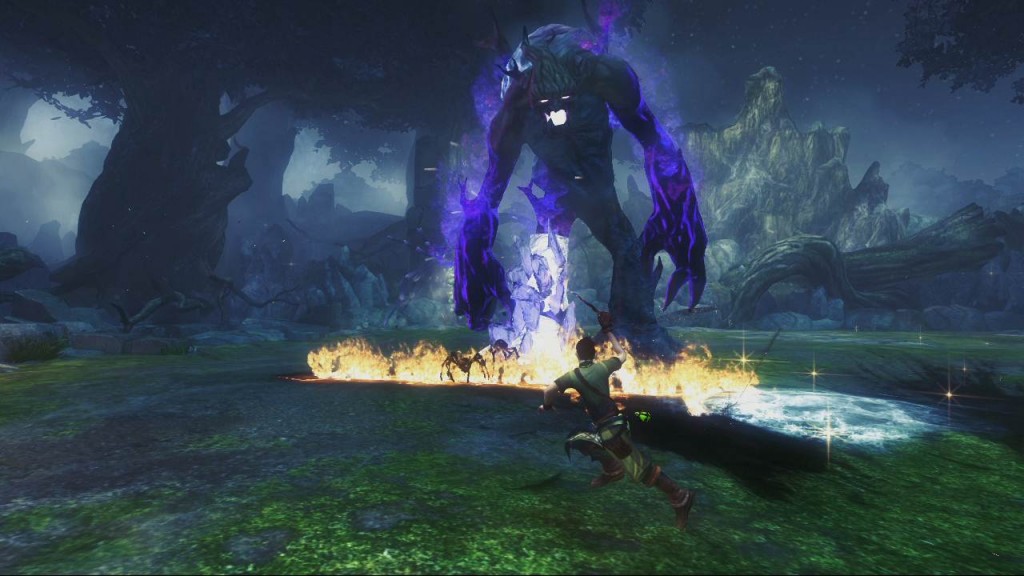 It was shown at E3 2010 and quite quickly captivated the minds of many, however, all these delays must have taken the game off many people’s radars. Having completed the game recently, I have to say that I am pleasantly surprised at the production values and how polished the game is.

You play as Finn, a young sorcerer, and his companion – a cat called Erline – follows him around everywhere. You will gain new powers as you keep playing, which includes almost all the elemental magics like fire, lightning, wind and so on. It’s all about defeating enemies and exploring beautiful areas. I really wish someone would create an RPG using the engine that powers Sorcery. The visuals on offer here is spectacular and mentally engaging to quite an extent. 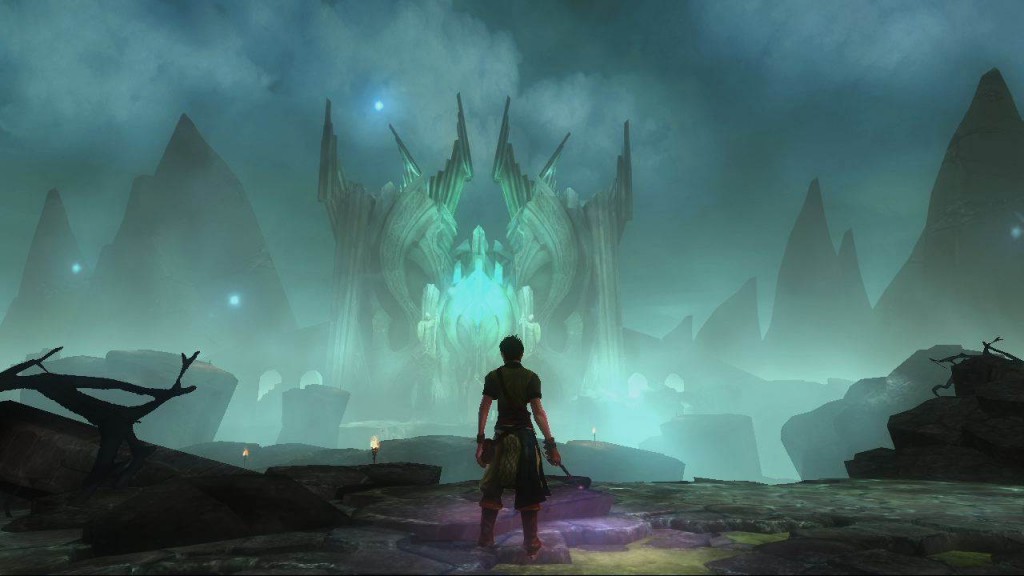 You will visit caves, forests and a variety of exotic environments, while battling all sorts of foes and solving puzzles. Since the game is entirely dependent on the PlayStation Move controller, let me say one thing. It actually works! Yes, the tracking is pretty accurate and even detects small movements resulting in a pleasant gameplay experience.

Normally, you’d associate motion controllers with terrible accuracy paired with mind-numbingly boring gameplay scenarios. However, in Sorcery, it’s the opposite. The tracking on offer here is competent along with a game that doesn’t insult your intelligence. Actually, it does, but a little. Not much. Yeah… phew. You really won’t be solving some insanely difficult puzzles here; most of them require you to use your magical abilities to open a doorway or clear an obstacle. 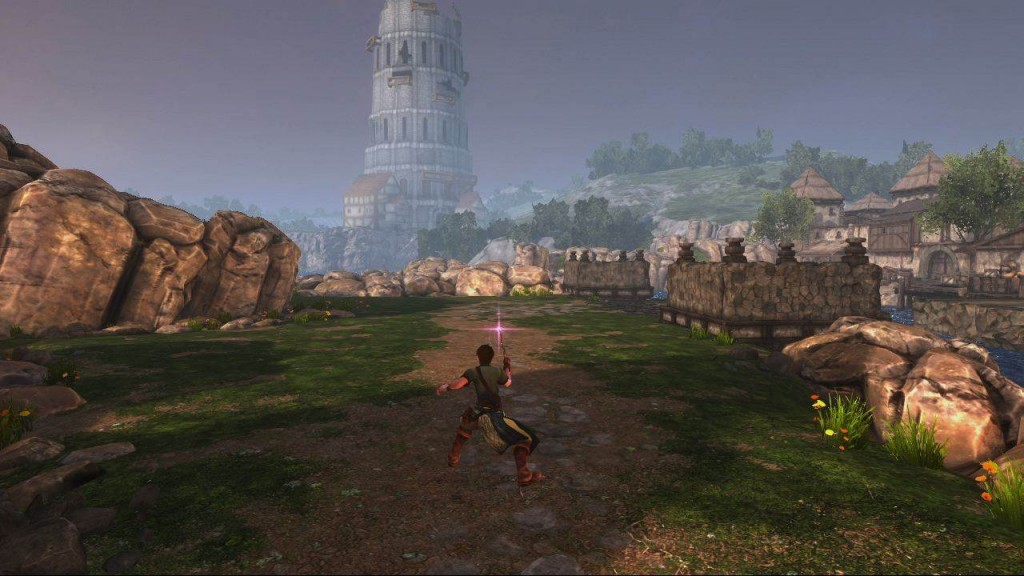 You need a navigation controller to, uh, control your character and go through the menus. And the Move controller, which is your real-life magic wand. This game will absolutely be a joy to play for Harry Potter fans, I’ll tell you that. I do have one issue with how you switch powers, though. It would have been nice if they had actually mapped the elemental powers to ‘buttons’ rather than requiring you to do a specific action with the Move to switch between powers. It’s annoying, and I still haven’t figured out how to switch without looking at the on-screen prompts.

You will be using the Move so much here – for every little action – that you shouldn’t be surprised if your arm gets sore and you can’t play for a few days. It happened to me, but I’m not really someone who can be called as a fit guy. As you keep on playing and clear a significant amount of the main story, you will notice that the game gets a little repetitive.

Fighting the same enemies, removing the same tree or stone out of the way, and doing the same stupid spinning action to switch between powers can become exhausting. This is where the game falls apart. The pacing is fantastic early on, but it’s a shame they couldn’t maintain it throughout the game. 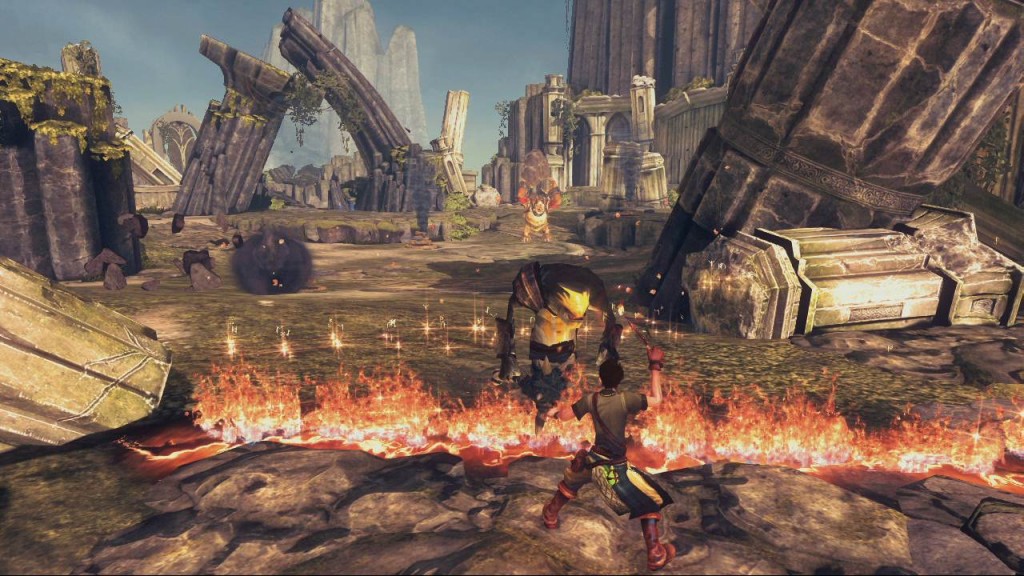 To make matters worse, you will be taunted by your companion Erline, and I actually found that to be quite tiring as the game went on. The banter between the two characters is cute, and sort of reminds me of the Uncharted games. Of course, the story will reveal a bit more details about these characters and I would rather not spoil that in this review.

There is also a good potion creation system here. You will meet a guy who sells items throughout the game, and you can also find treasures in your journey to sell and collect more gold, which can be used to buy items. Creating potions is pretty simple; you have to combine three ingredients and try various combinations to create potions of different flavours, which will be recorded in your inventory. Even the health you pickup is a potion. Waggling the Move controller and doing a drinking action is pretty cool as well. The attention to detail is quite good, but it gets repetitive. 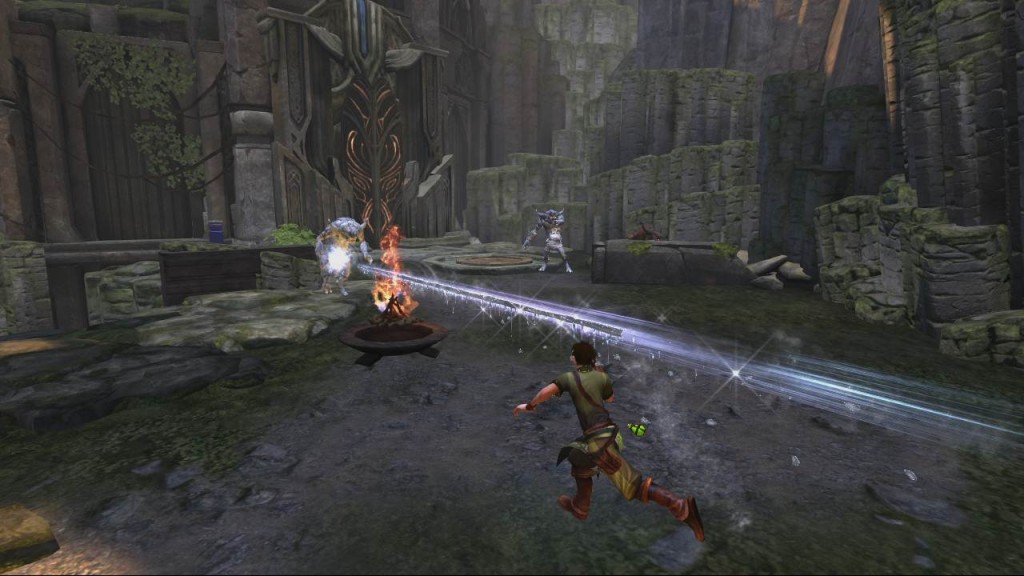 One thing is for certain; Sorcery is the best Move game ever made, and quite possibly, the most accurate one as well. It falters in a few areas, but excels in a lot more, and that is the hallmark of a good game. If you have even a cursory interest in the Move controller, then do yourself a favour and get this game. It’s charming, oozing with production values, and will give you a good experience if you can deal with the repetitive gameplay mechanics.

If there’s one thing that’s surprised me since Sony’s Move motion controller found its way to the shop shelves, it’s the dearth of wand-wafting games that have been released. I mean, at first sight, it seems tailor made for games featuring magical wands and wizardry. Thankfully, Sony and developer The Workshop have conjured up Sorcery – a much delayed but very welcome addition to the Move catalogue.

Now, it should be noted that firstly, you must have Move to play – it’s your wand, you see. Secondly, you’ll need to make use of a separate pad or Navigation Controller to control your character’s movement.

Sorcery puts you in the shoes of Finn, a sorcerer’s apprentice who’s a bit wet behind the ears but finds himself in possession of his very own wand. Accompanied by his feisty feline sidekick, Erline, the two must master the art of magic and use it to conquer the malevolent plans of the Nightmare Queen, who appears hell bent on taking over the world. It’s up to you to roam the Faerie Kingdoms, hone your wizardry skills and solve a few rudimentary puzzles to defeat the evil Queen. It’s your typical story of good versus evil – but where it differs is its clever use of Move, which marks a new era for the peripheral as the title has been purpose made with it in mind.

This great-looking RPG is steeped in Irish folklore, giving the game a certain look and feel. It strikes me that this is the kind of application of motion control that would have been exactly what Peter Molyneux envisaged when crafting his Fable series on the Xbox 360.

Progression through the fairly short story provides the once naïve lad with a plethora of powerful magic based around wind, fire, ice, earth and lightning.  With a simple movement of the controller, spells are cast or potions brewed and imbibed, puzzles solved and evil minions vanquished. Twisting and turning Move allows you to unlock doors as though turning a key, gulp down a revitalising health potion or rebuild broken bridges. Once you’ve gained the ability to cast spells such as whirlwinds and lightning bolts, you really do feel powerful and wizardlike. Within no time you’ll be conjuring up walls of fire and encasing your enemies in blocks of ice. What’s more, you can combine spells and supplement your powers by finding and mixing new ingredients.

A flick of the wrist sees our budding magician beating banshees and trolls with aplomb. The sheer number of enemies that you’ll face, however, may leave you with a slightly sore arm after shooting lightening bolts and casting spells for long periods. Big foes also stand in your way – some of them quite memorable – although they can take an age to defeat. And it’s at these moments you realise there’s a certain amount of monotony to the gameplay. Move and shoot, move and shoot. Rinse and repeat. The paths and objectives are linear and offer little by way of exploration too. But the landscapes sure are colourful and a joy to look at so the journey isn’t an unpleasant one.

It’s clearly a title aimed at a younger audience, with simple puzzles acting only to break up the near constant combat. The voice acting for the main characters is top notch and there’s a humorous quality to the dialogue, which adds somewhat to its charm.

As is so often the case with this new-fangled technology, getting Move to do exactly what you want it to is occasionally tricky. Directing your magic can be troublesome, especially when you’re trying to shoot magic round corners or at an angle.  The camera can also be frustrating, with your vision inadvertently obscured and often leading to lost health as bad guys home in on you.

Another minor – but fairly obvious – gripe is the likelihood of suffering a few aches and pains the next day after a gaming session. Motion control is a very clever phenomenon but waving your arms about over a sustained period does take its toll – and sadly, there’s no way of playing Sorcery without Move. Maybe that’s the positive side of the game being fairly short lived?

Showcased at E3 2010, Sorcery has been a long time coming. Was it worth the wait? It’s all fairly one dimensional and replayability is questionable after a brief campaign but it’s great to show off the abilities of the Move controller. It’s certainly not a reason to rush out and buy Move but if you’ve already got one in your drawer, it’s well worth picking up a copy – particularly for the younger audience.

Good production values. Excellent visuals. Accurate tracking. Finn and Erline are quite likable. Beautiful and varied environments. Lots of powers at your disposal.

The game becomes repetitive later on. The powers should have been mapped to buttons instead of requiring you to spin the controller in a weird way.

Final Verdict:
SUPERB
If you have even a cursory interest in the Move controller, then do yourself a favour and get this game. It's charming, oozing with production values, and will give you a good experience if you can deal with the repetitive gameplay mechanics.
A copy of this game was provided by Developer/Publisher/Distributor/PR Agency for review purposes. Click here to know more about our Reviews Policy.