Despite featuring fantastic gameplay, Soulcalibur 6 on PS4 Pro and Xbox One X is a mixed bag from a technical perspective.

It’s been more than six years since Soulcalibur V was released on PlayStation 3 and Xbox 360. After the somewhat mixed performance of Soulcalibur V, both commercially and critically, the future looked quite dreary for the series. But at The Game Awards 2017, Bandai Namco (after Producer Motohiro Okubo consistent efforts to get the series back into action as per an interview with DualShockers), finally announced a new entry after almost six years. Soulcalibur 6 was recently released and much to our surprise, the game has totally managed to exceed our expectations as far as gameplay goes. However, it remains to be seen whether the critical success will translate into commercial success and whether the game will be able to live up to the excellent Tekken 7 and fan’s massive expectations. Regardless of the success the game will possibly achieve, Soulcalibur 6 from a technical standpoint is a rather interesting case to analyze.

Last year’s Tekken 7 was one of the best-looking fighters around, thanks to a full physical based rendering pipeline and fantastic lighting effects. It marked a shift for the franchise not only in terms of gameplay but also visually and the technology implemented. However, Soulcalibur 6 is a bit of a different story. It uses the same engine as Tekken 7 (which is Unreal Engine 4) but it really doesn’t push the envelope like Tekken 7 did. Characters and environments in Tekken 7 used high poly models, advanced skin shaders, fantastic particle effects and adherence to physical based lighting. These parameters are pretty much downgraded in Soulcalibur 6. In fact, the abundant use of depth of field in Soulcalibur 6 is just a cover for some of the shoddy textures the game is trying to hide. Particle effects, too, are not as impressive as the ones we saw in Tekken 7 but they get the job done, we suppose.

We also have a bit to add about the material shaders and anti-aliasing solution used in Soulcalibur 6. Once again, Soulcalibur 6 disappoints in these two departments. The game has jaggies over its character models and environments, and the material shaders are rendered in very low quality at times, giving us the impression that the game was stuck in the transition between last and current gen.

Despite having some negatives, Soulcalibur 6 has some shining positives too. Its art style is pretty fantastic, and this is expected given the series has always exceled in this department. Animations for the most part are pretty fluid and the moves have a certain weight to them. However, the highlight of Soulcalibur 6’s technical pillar is the game’s fantastic image quality. The overall rendered image looks extremely crisp and the colors really pop out. This is a big change compared to the dark look and feel of Soulcalibur 5. In a way, Project Soul’s Soulcalibur 6 is definitely a huge step from Soulcalibur 5 but compared to what Bandai Namco Studios achieved with Tekken 7, Soulcalibur 6 definitely is a step down. Now, there could be a number of reasons for this but our best assumption is this: Bandai Namco wanted to play it safe with Soulcalibur 6 by not investing too much into graphics side of things. It makes sense in a way given how risky this project was for the publisher. 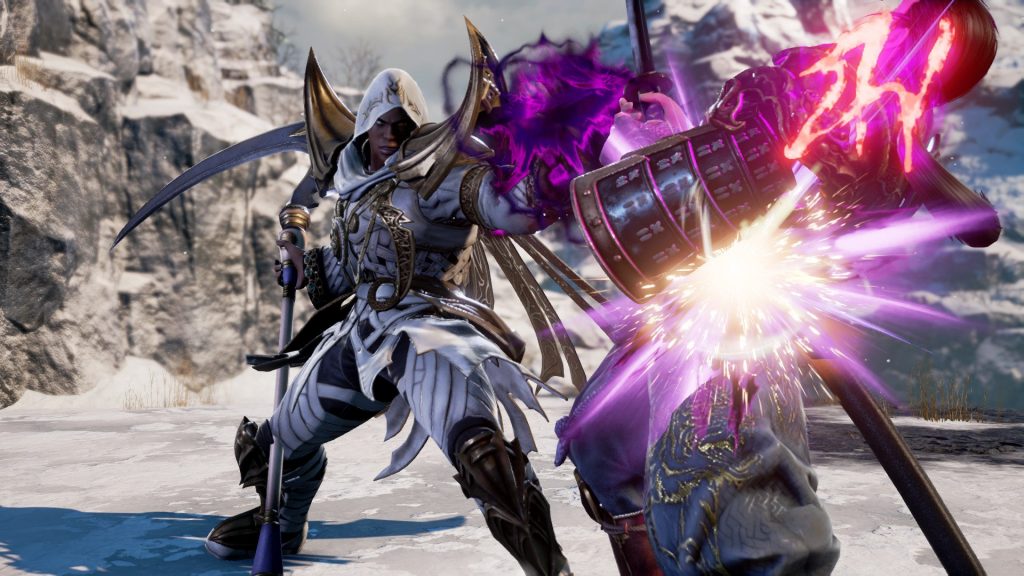 Now, on the console front we have some interesting differences to point out between the PS4 Pro and Xbox One X versions of Soulcalibur 6. Other then the usual differences in resolution, the Xbox One X has a better anti-aliasing solution in place and slightly better ambient occlusion. We also witnessed better draw distances on the Xbox One X version. On the PS4 Pro, however, we spotted some low-resolution textures here and there. Both platforms are largely affected by low quality textures in the environment but other than the differences mentioned before, the core assets are 1:1 across both versions. On the frame rate front both versions performed admirably well, with frame rate drops only happening during finalization of characters and stage selection screens. At the end of the day, Soulcalibur 6 plays best on the Xbox One X and that really is not such a huge surprise.

Soulcalibur 6, from a purely graphical perspective is a step down from the brilliant Tekken 7. I hope that whenever the next entry happens, the developers will push the visual envelope ahead instead of not taking risks. Having said that, Soulcalibur 6 is this generation’s finest fighting game with excellent gameplay. And gameplay always wins over graphics, right?