Reply Game Studios' upcoming hack-and-slash looks to be an interesting game with a couple of unique ideas up its sleeve.

The action genre has long been a staple of the medium of games, although its popularity has somewhat diminished over the last couple of years. What was once a flourishing genre with games like Metal Gear Rising Revengeance, Nier and many more has now been reduced to a shadow of its former glory – with notable releases being few and far between. What’s more, is that most action games now seem to be following a standard blueprint – involving skill trees, XP grinding, and open-world elements just to name a few.

While most developers are trying to cash in on the popularity of these new-found mechanics with run-of-the-mill action games, others such as Reply Game Studios are looking back to the (arguably) glorious past with Soulstice – an action game that’s trying to replicate the magic of Nier with a few neat tricks of its own. While we are still some ways off from its imminent release, Soulstice is certainly shaping up to be one of the more unique and interesting experiences that 2022 may end up offering. 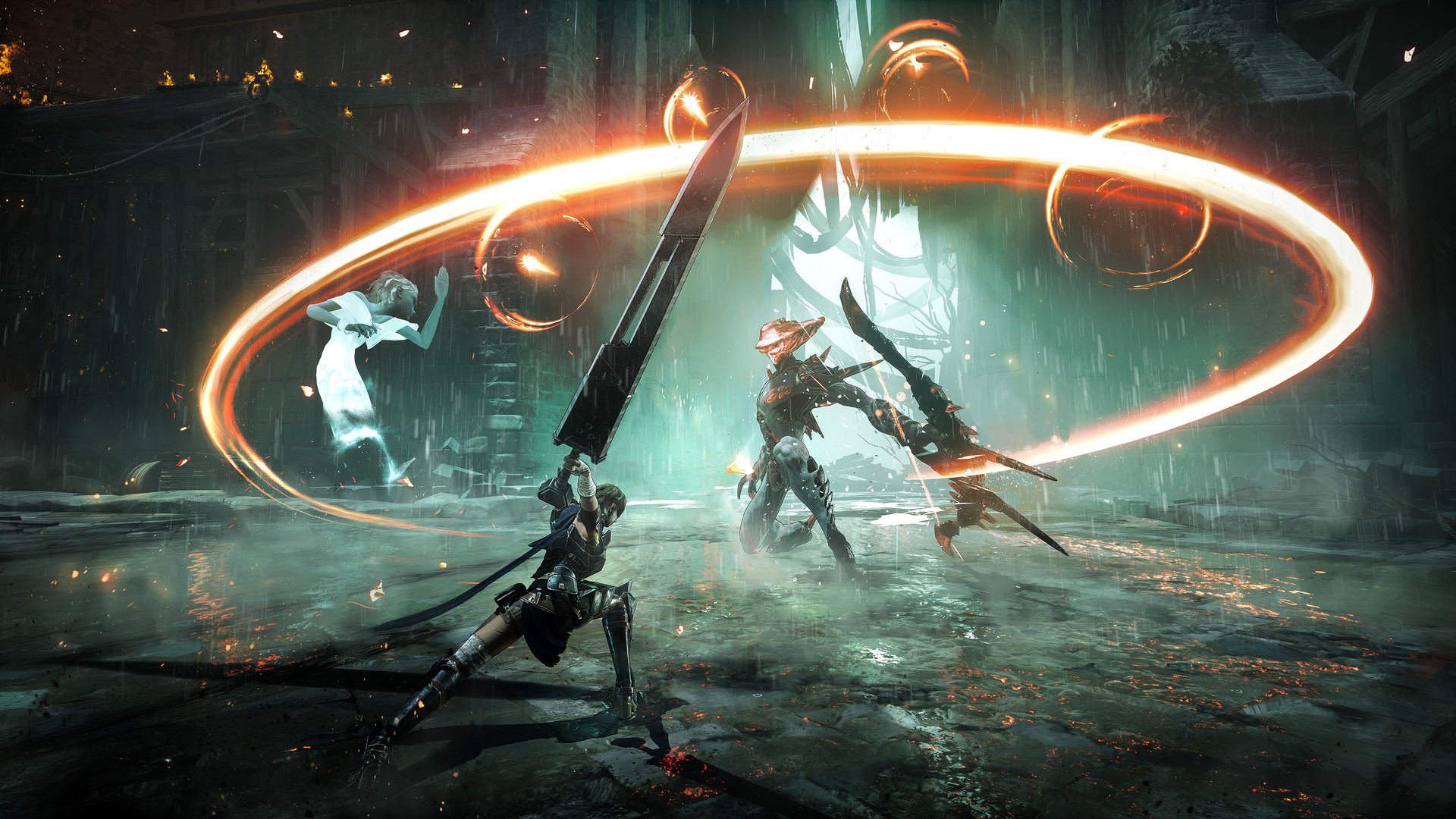 Soulstice sees players controlling two protagonists linked by a soul chain – namely Briar and Lute. You see, Soulstice is set against the backdrop of the dark fantasy kingdom of Keidas. As fate would have it, a calamity strikes the kingdom as otherworldly creatures known as Wraiths crumble and occupy this once glorious castle. The Wraiths are known to come from the other side of Veil, which we are assuming to be a portal between two worlds. Briar and Lute now have to rise to the call of duty, since the two conjoined sisters seemingly have the might and power required to shun these baddies from their home. The two warriors will embark on a quest that will take them throughout this vast and crumbled kingdom as they try to better understand their purpose of existence.

While the story certainly looks to be pretty heavy in its concepts, with proper nomenclature for races and otherworldly creatures – Soulstice doesn’t seem to be adamant over hammering an intricate story that’s filled to the brim with plot revelations and layered characters. In that sense, Soulstice seems to be a bit like Nier as it seems to be favoring style over substance; albeit much darker in its concept and much less flavourful and funny in its dialogue. While it’s still early days to pass on a judgment like that, the focus on keeping narrative distractions to a minimum could actually work very well in Soulstice’s favor. 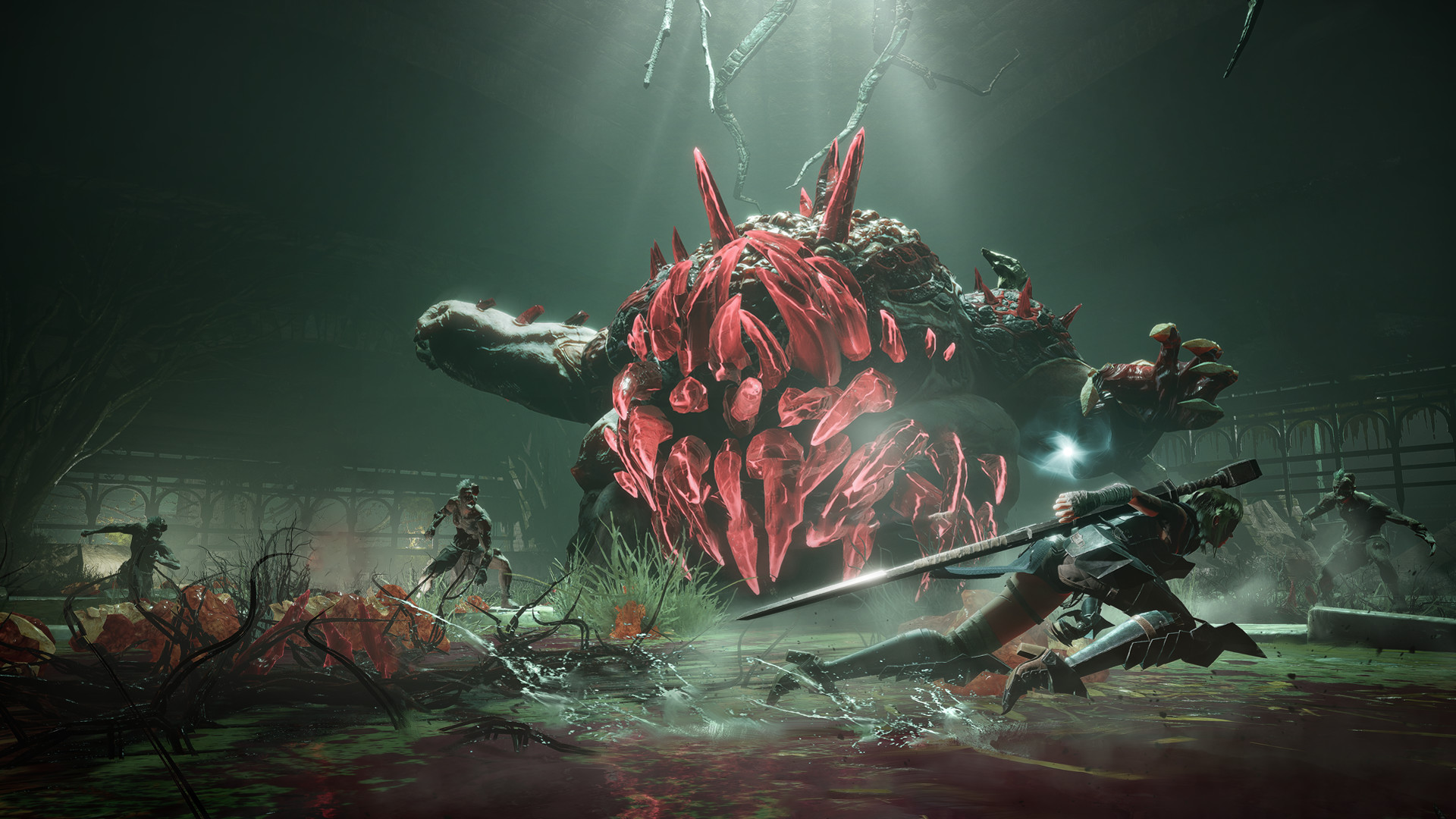 Now let’s talk about the gameplay. Soulstice’s brand of action relies heavily around unleashing a flurry of combos upon your adversaries, and it’s looking really promising to say the very least. Reply Game Studios has really nailed the feeling of being a nimble warrior that can chop down foes in moments unnoticed. And to add to that, the dual protagonist structure holds interesting ramifications in the combat – as the two serve distinct purposes that all connect together to craft a complex web of systems that comprise Soulstice’s combat system. Briar will primarily use her swords to pummel down enemies with a fast rush of attacks while Lute will play the support as she deals ranged damage and casts down spells to keep approaching enemies at bay. Briar can wield multiple weapons in her arsenal – ranging from a greatsword to a bow to an axe and much more. Each weapon will feature its own distinct combos to learn, and additionally – players can switch between equipped weapons mid-combo to achieve some rather fantastic results.

A Unity meter keeps track of the harmony between the two sisters during combat and it’s important that players fill the meter as soon as possible. As the Unity multiplier increases, Lute’s support abilities start becoming more and more useful as she gains the ability to target more enemies. And once the Unity meter fills up to a certain point, you can enter a frenzied Rapture state – which is essentially a rage mode where you have increased speed and damage for a short period of time to give you an edge over your enemies in combat. 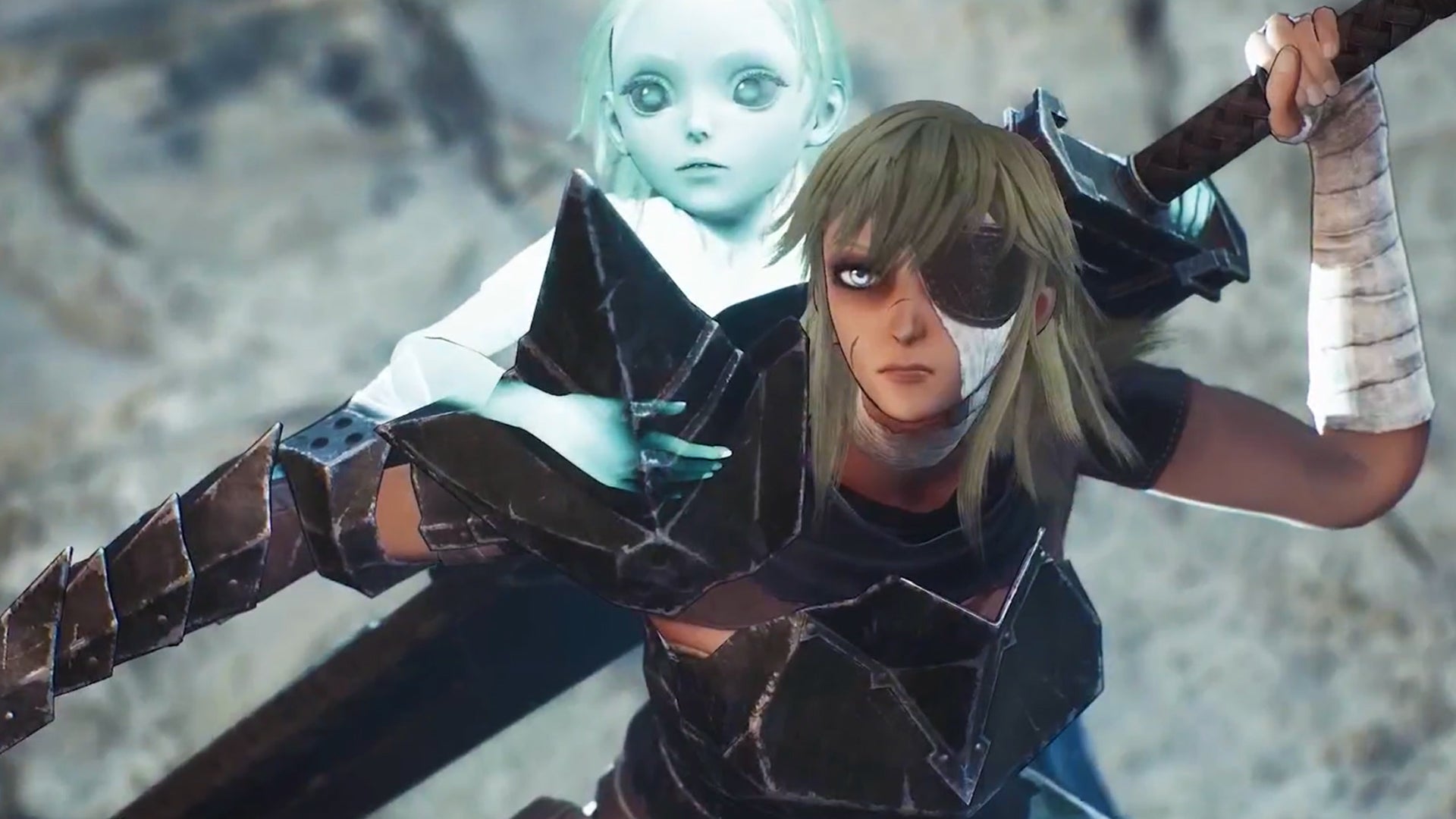 Reply Game Studios seems to have crafted an excellent combat system that plays very well to its strengths, while also allowing a fair deal of freedom in how players choose to approach encounters to have an element of personal expression within the combat. Of course, a fleshed-out combat system wouldn’t be of much use if there weren’t an interesting cast of enemies to fight, but thankfully Soulstice seems to have nailed this aspect of the experience as well, with enemies ranging from cannon fodder to mini-bosses that require very special tactics to beat.

For instance, there are the Wraiths – creatures made of an ethereal material that cannot be damaged until Lute casts a very specific spell and Briar reaches within close proximity to them. Then there are the Possessed, which as the name suggests – have been possessed by Wraiths and are invulnerable to attacks in their normal form. To even stand a chance at defeating them, players will once again have to take help from Lute by casting a limited-time spell and separating the host and the parasite – then kill the parasite in that form to defeat it. It’s all on top of your usual boss encounters, which if the normal encounters are anything to go by – would be ruthless tests of a player’s skill level. 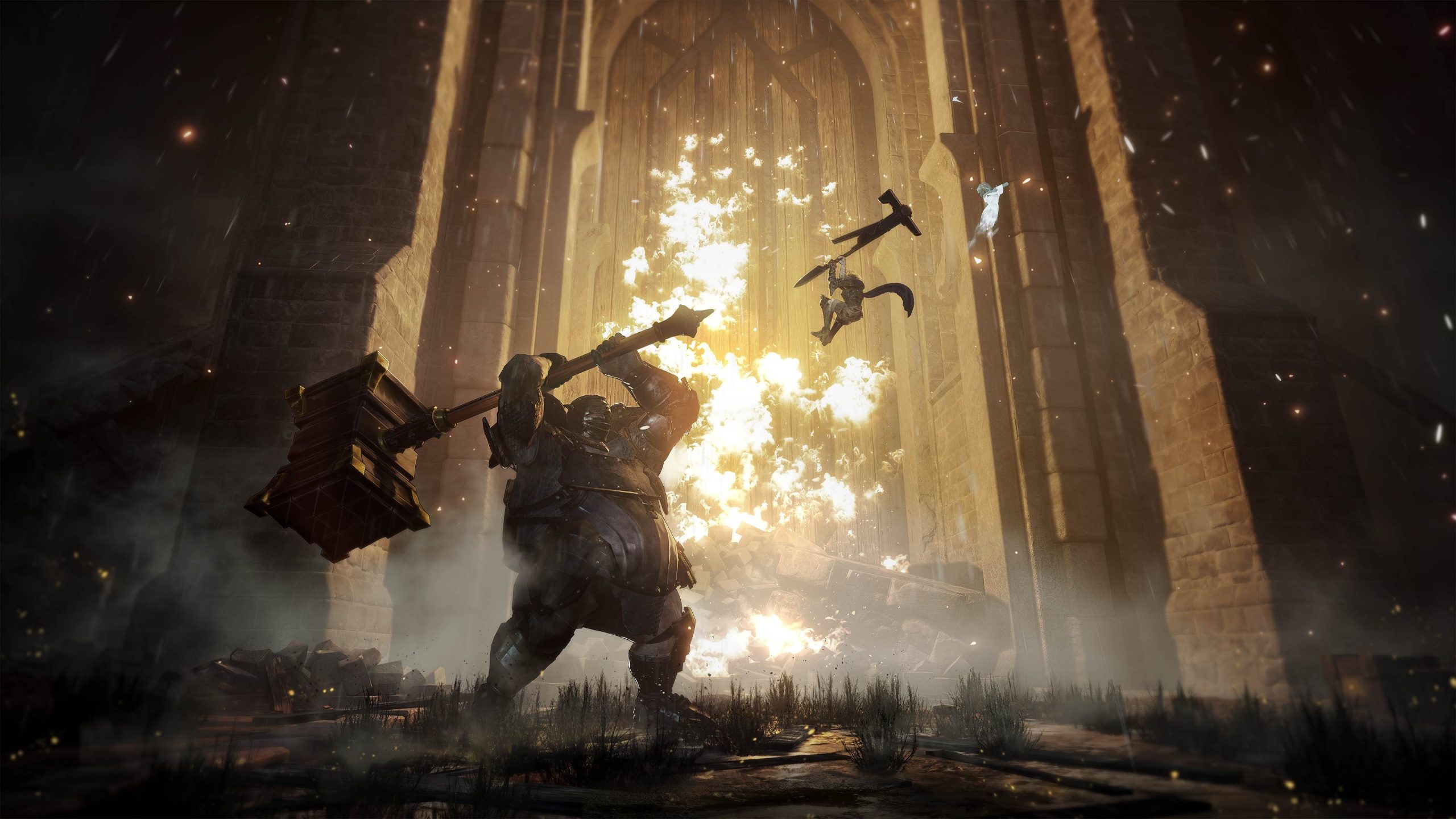 Now let’s also briefly talk about the presentation. As mentioned before, Soulstice is set in the crumbling remains of Keidas – and this dilapidated kingdom looks absolutely gorgeous. The enemy designs are striking from a design perspective with varied armor designs and weapon looks. That said, the texture work and asset quality aren’t as detailed as many upcoming details – although that’s most likely an artistic choice since the character models are a mix of cartoony and realistic. Additionally, the game’s many levels also feature varied environments that players would need to explore in search of the many weapons and abilities that will provide you an edge in combat. Much like NieR: Automata, Soulstice also features a 2D platforming section to provide for some variety between action sequences. And we’d be remiss if we didn’t talk about the punchy soundtrack that’s composed of electronic music which seems to be a perfect match for some fast-paced action.

Soulstice is set to release on 20th September, 2022 for PC, Xbox Series X/S, and PS5. And while the choice to restrict the game to current-gen console hardware (which might I add is still very tough to find) might prove detrimental to the game’s sales potential, Soulstice could still end up being a massive hit if it manages to deliver on its promise of adrenaline-pumping and bombastic fast-paced action with a well-realized dark fantasy setting. With direct competition nowhere to be found, Soulstice is fortunately enough – set to enjoy a big space in the spotlight. Should Reply Game Studios play their cards right, Soulstice could end up being one of the biggest surprise hits of the year.