The fluttery action popularized in the early 2000s is something that countless action games have since drawn inspiration from if not flat out replicated, and you can’t really blame them at the end of the day. Despite all the advancements in game design and the wild amounts of depth action games are now capable of, the classic foundation pioneered in the early 2000s still seems to be a perfectly fine starting point for any good action game to build upon as they mix in their own flavors to hopefully become a great game. I guess there’s just something about having a supernaturally powerful main character with a giant sword on their back that upgrades their abilities from currency earned from fighting as spectacularly as possible that just continues to endure. While Soulstice is without a doubt one of these sorts of games, I’d be lying to your face if I said it didn’t ultimately win me over with its often-superb mix of evolving old ideas and reinforcing them.

Soulstice tells the somewhat tragic tale of two sisters, Briar and Lute, fighting to close a tear in the veil; the cosmic membrane separating their world from a much more ferocious and sinister one. It’s a situation our main characters aren’t particularly surprised by, as the dastardly wraiths from the other side are known to attempt such things, but this time it’s on a much larger scale and presents an apocalyptic threat. Briar and Lute benefit from being “chimera” as in, a fusion of two souls. In their case, sisters. Lute is now a powerful ghost or “shade” that can wield all sorts of magical abilities while Briar has achieved supernatural levels of endurance and strength. Together they are quite the interdimensional force to be reckoned with, but so too is the army of monsters that await them.

"There’s just something about having a supernaturally powerful main character with a giant sword on their back that upgrades their abilities from currency earned from fighting as spectacularly as possible that just continues to endure. While Soulstice is without a doubt one of these sorts of games, I’d be lying to your face if I said it didn’t ultimately win me over with its often-superb mix of evolving old ideas and reinforcing them."

It’s a good albeit predictable tale that has our heroine duo coming across several other characters and tightly-designed areas in this gloomy, gothic world. Sometimes even coming across echoes of the past that provide some context for the story by giving you short glimpses into things that happened in any given area. These little scenes aren’t particularly expressive, but they are sufficiently harrowing, and more than get the job done of fleshing out the game’s world and breaking up the standard action game loop of tearing through enemies and exploring on your way to the next battle, and kind of remind me of talking to fallen warriors in the hall of heroes from MediEvil. I do wish that Briar and Lute were a bit more interesting themselves, especially Briar, who despite being unrelentingly cool and well designed, never really compelled me one way or another as a character.

The gameplay immediately makes it pretty clear that those who’ve ever played an action game from the PS2 or Xbox 360 eras will be right at home. A control scheme centered around light attacks with the Ashen Vindicator – Briar’s standard sword, and heavier blows from the Ashen Enforcer – a massive scythe or other weapons make a familiar set up, and as Briar’s arsenal expands, you’ll have different ways of making shorter work of monsters, but Soulstice also throws in some passive and active abilities with Lute, who can block attacks, freeze enemies, and dish out some pain of her own. Kind of like how Atreus works in God of War 2018. This is where the blending of old and new starts to show, a trend you’ll notice often in Soulstice. For starters, the often-fixed camera does relinquish control to the player, usually for the bigger fights, and then it plays more like a modern action game, but then it’s back to panning and trucking around during the platforming and exploration sections and even some battles for a more cinematic flair. This dual system creates a situation where the camera type switches around fairly often. Both systems work well enough, but the fixed angles can make platforming a bit wonky, and I can see how switching back and forth might feel jarring to some players.

You’ll probably hear people compare Soulstice’s combat to action games from the early 2000s a lot, and that’s not wrong. With Briars cartoonishly oversized sword magically resting in her back when not in use, it’s a tempting comparison to make. but when you get down to it, the individual strikes have more weight to them than that. Where action games from the early 2000s enables you to unleash flurries of attacks and barrage enemies with hyperactive nonsense, Soulstice is a little more deliberate and precise than that. Each and every strike matters – not nearly as much as they would in a Soulslike, mind you – but it still does have a knack for punishing you for too much mindless button mashing, thus forcing you to learn the ins and outs of Briars many weapons, Lute’s plethora of passive and active abilities, as well as the all-important banishment and evocation fields. 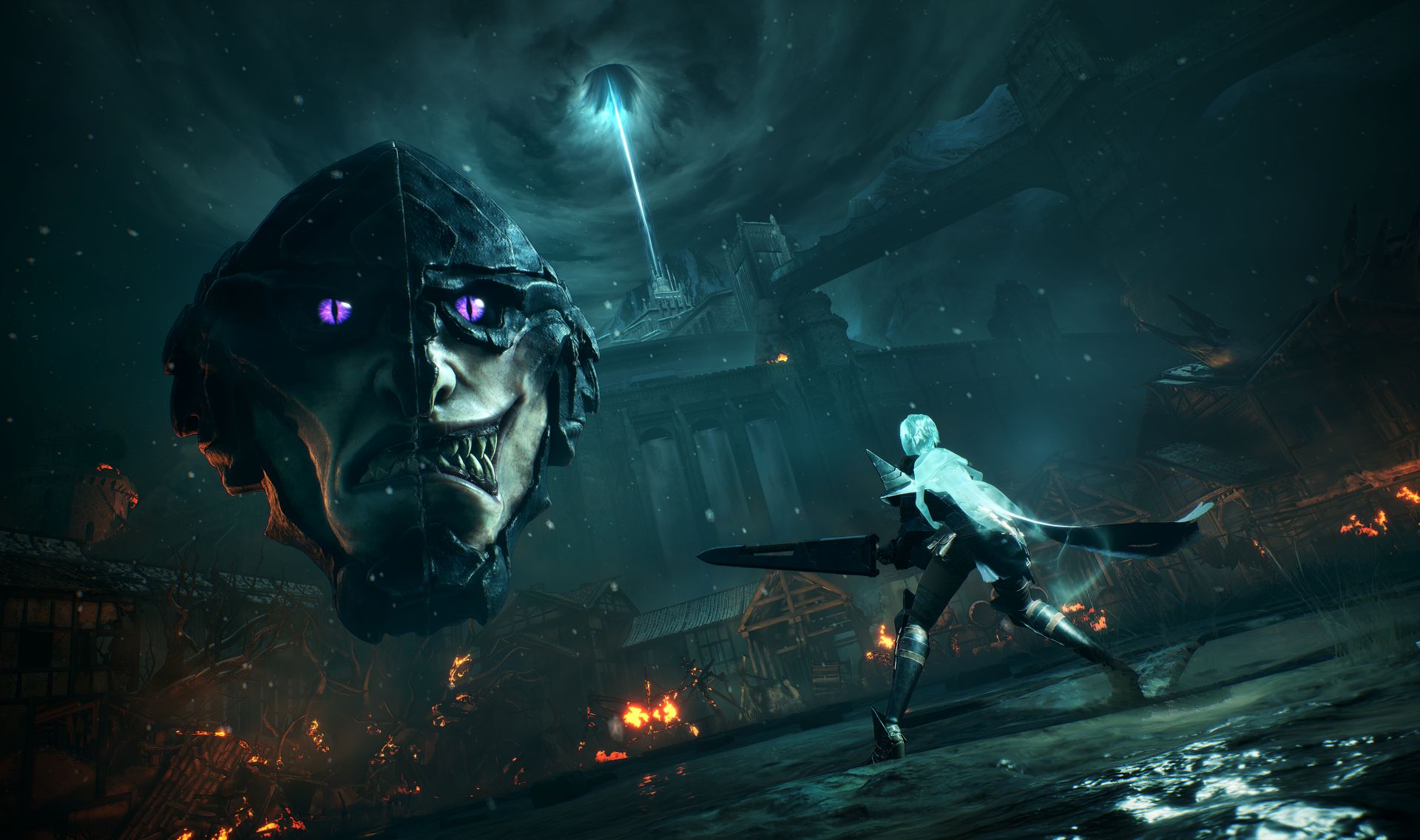 "You’ll probably hear people compare Soulstice’s combat to action games from the early 2000s a lot, and that’s not wrong."

These fields are used to great effect and make Soulstice stand apart from the crowd of hack and slash games a good bit. Controlling the blue evocation and the red banishment fields is a special ability that Lute can use to make corresponding enemies vulnerable, barriers breakable, and even reveal platforms that lead to hidden areas and items. Using them too long will hurt Lute though, which will in turn make you less lethal without her abilities for a short time, so there’s some strategy involved here.

Ultimately, the two fields mechanic isn’t that different from the multi-colored attack system of Heavenly Sword, but it’s used much more holistically throughout other facets of the game here like in exploration and puzzle solving that it frankly feels like a more organic part of this game than it did in that game. Also, a unity meter that illustrates the connection between Briar and Lute can add to the efficiency of combat and even lead to a devastating rapture state where Briar can easily tear through all enemies, fields be damned. so that’s something to keep an eye on as well. All-in-all the combat is fun to master and expand upon as new weapons and skills are added to your repertoire. All the weapons are fun to use and just different enough to make them all worth tinkering around with, although I have to admit I ended up favoring the hand of retribution probably more than I was supposed to.

Defeating enemies with quickness and purpose leads to a better score and collecting more crimson tear residue, at the end of a fight, which you can then spend on upgrades for Briar’s weapons, same for Lute with the cobalt-colored residue. I’ve got to admit I was surprised to see just how deep Lute’s move set goes, and how she can be upgraded into quite a juggernaut of her own in several different ways. Spend wisely though, as you only have the ability to buy items and skills in between levels or while talking with Layton; a traveler and observer that helps flesh out the story a little bit and also acts as the quintessential “whaddya buyin’?” character. 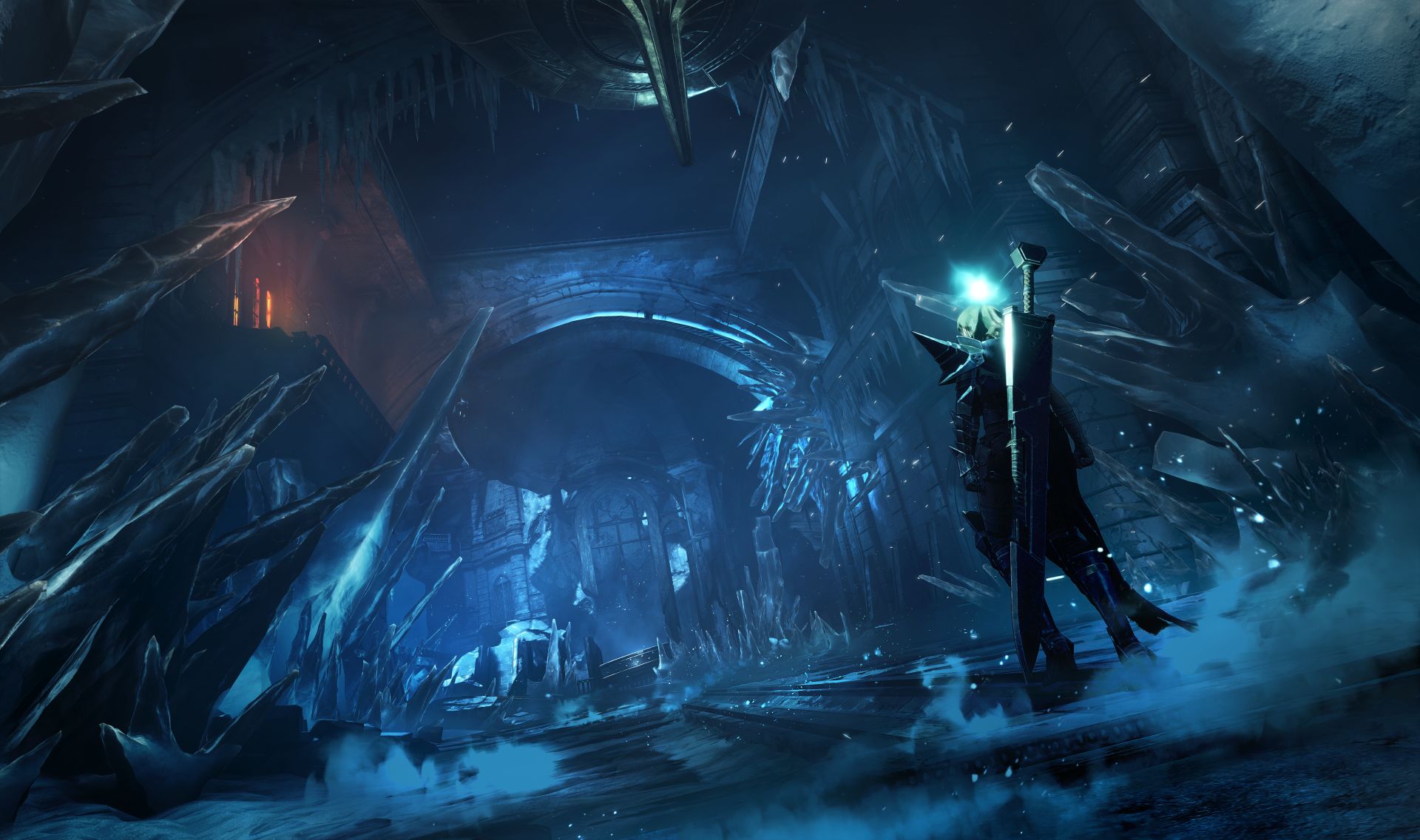 "Admittedly, some enjoyment of Soulstice may be gained or lost immediately depending on your personal experience with classic 3D action games."

Admittedly, some enjoyment of Soulstice may be gained or lost immediately depending on your personal experience with classic 3D action games. Soulstice proudly lives and dies by the same sword. Somebody who just got into the action genre within the last ten years or so might feel very differently about the game’s often fixed camera and highly linear layout than somebody who has fond memories of God of War 2. It’s also not helped much by some average-to-okay voice acting and writing, and the generic early 2000’s video game music is a pretty big missed opportunity as well. Still, regardless of the type of action you’re most comfortable with, Soulstice gets more than enough right with modern and classic ideas to be worth pushing through its few hang-ups.

Final Verdict:
GREAT
While the characters and story don’t do enough to push it over the top, Soulstice delivers a great action game that just about anybody can enjoy.
A copy of this game was provided by Developer/Publisher/Distributor/PR Agency for review purposes. Click here to know more about our Reviews Policy.