Authentic and enjoyable, SpongeBob SquarePants brings the long lost fun back into the offline co-operative experience.

Following in the same witty charm as he does on the Nickelodeon TV show, SpongeBob SquarePants is a perfect example of how one medium should transit into another. The game succeeds at nailing the core fundamentals of what makes the SpongeBob TV show such a funny and well popularised icon in the eyes of children.

The story of the game is simple and it’s in this simplistic manner that makes the game worthwhile. The series’ main villain Sheldon Plankton decides to stir up trouble and attack the Krusty Krab. Suited and armed in a giant robotic mech, Plankton steals a safe containing the secret formula to Mr. Krab’s Patties. But despite his large war-machine sized artillery he is unable to break the safe and must go searching for three special keys, hidden across the ocean floors. 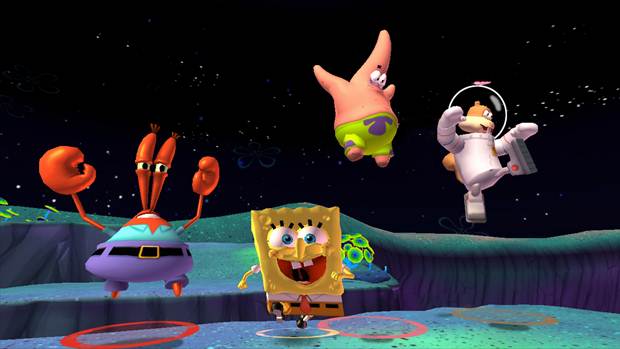 "Recall back to 2004 and you’ll notice the game plays in a similar manner to that of Activision's Shrek 2. Players populate the same screen from a top-down point of view and work together to defeat an onslaught of enemies using a variety of weapons at their disposal."

In typical video game fashion it’s upto SpongeBob and his friends to tail the evil genius as well as his horde of evil minions, and retrieve the safe before Plankton can find all the keys. The game plays out as one big SpongeBob SquarePants movie and it works great. Right from the start of the game it’s easy to see that the main audience which the game is targeting are the fans of the series as well as younger children. It places a focus on team work and aims to get everybody involved.

The game has a four player offline co-operative mode to it and this encourages its pick up and play nature. Working as a team in a third-person action adventure, each player takes the role as one of the characters from the show.With Sandy, Squidward, SpongeBob, Mr. Krabs, and Patrick to choose from the humour here is guaranteed. With its terrific voice acting of the original cast this is a game well deserved for the fans.

Recall back to 2004 and you’ll notice the game plays in a similar manner to that of Activision’s Shrek 2. Players populate the same screen from a top-down point of view and work together to defeat an onslaught of enemies using a variety of weapons at their disposal. Plankton’s Robotic Revenge is a catastrophic explosion of continuous fun and this is where the game excels. It extends upon these features with a small and simplistic method of weapon upgrading. The game doesn’t place any focus on advanced levelling up, or any RPG mechanics. It simply adds an element to motivate the younger audiences and bring variety to the action of its gameplay. 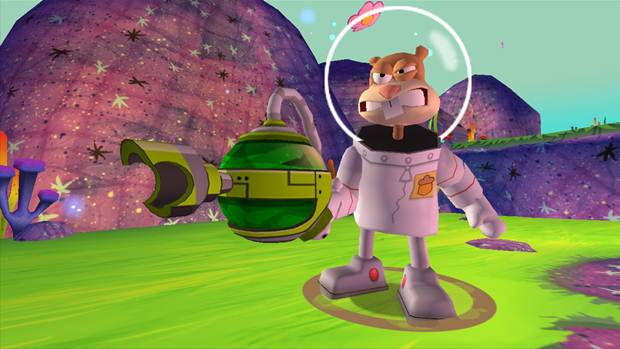 "With names like the Pickle Blaster, Condiment Canon, and exploding Pie Launcher, it's hard not to laugh at its humour and authenticity to the show."

The Controls are simplistic and they work well enough to satisfy the player. SpongeBob can slap and spin, initiate a super power, jump over enemies, and fire toy guns. Each character follows the same traits with subtle differences to show their own personalities. There’s one button for each control and the simplistic nature doesn’t leave you demanding any more. It’s a healthy balance of control and satisfaction.

The game offers more than five gun orientated weapons to choose from all taking reference from the TV show’s Krusty Krab restaurant. The choice of weapons are decent enough to see you through to the end of the game and are all widely different in their own use case. Referencing those of a pistol, laser, grenade launcher, and shotgun, each weapon displays its own sense of creativeness and variety.

All the weapons can be upgraded by spending points in the form of mechanical parts, that you earn from smashing barrels and destroying enemy robots. Upgrades are visually effective and the game doesn’t require a second playthrough in order to upgrade them to their highest possible levels. With names like the Pickle Blaster, Condiment Canon, and exploding Pie Launcher, it’s hard not to laugh at its humour and authenticity to the show. 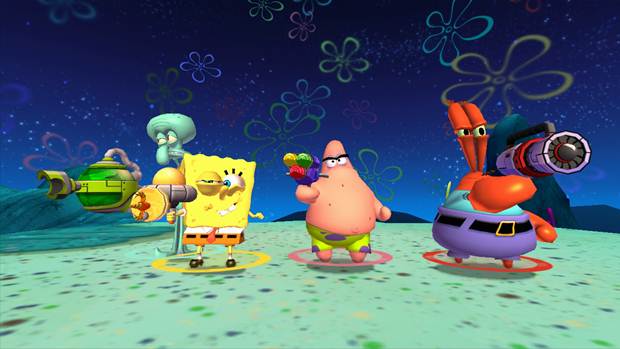 "The lack of creativeness within its level design weaken the structure of the game. Levels are colourful enough and distinctive from the last, but without the amazing paint work they are essentially all the same."

In terms of the level design the obvious signs of exploring the ocean floor are there. Jellyfish and crustaceans populate the environment and signs of sea life bring this world to life. The colourful environments that hold a resemblance to the TV show and the vibrance and atmosphere are a joy to watch in motion. The small problems that the game does have are not enough to take away any form of enjoyment from it, but at the same time become noticeable as the game goes on. The level design of each environment you go through holds the same template as the last, except the new splash of paint does well to cover this.

The lack of creativeness within its level design weaken the structure of the game. Levels are colourful enough and distinctive from the last, but without the amazing paint work they are essentially all the same. From the start of the level right on to the end the game follows a scripted pattern as to how it directs the players. Vertically positioned platforms steer you to leap pitfalls, then jellyfish themed elevators carry you from one ground to the next. Along these minor level break ups you are required to defeat a horde of enemies, in order to bypass a gate and progress further onto the next level.

The problem with this staged out method of traversal is that it circles in its own repetition. I feel much more could have been done here to deliver more expression into what is fundamentally an enjoyable game and well recognised franchise. Travel from one end to the next, defeat the robots to unlock the door, make your way across an elevator, and complete the level. This is fun for the first couple of times around but awfully predictable in the long run. Although younger audiences may not see this as a problem, older fans of the series may find this dull at times, and discourage its replay value. 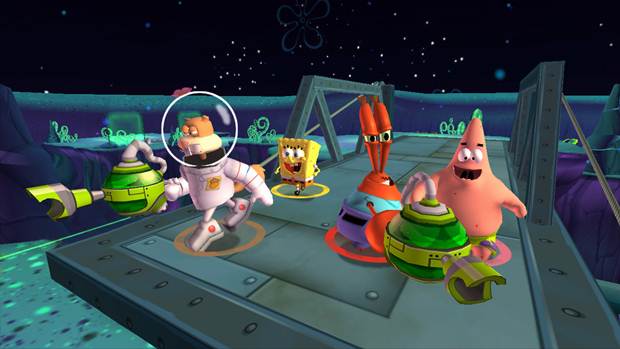 "Lasting around three and half to fours this isn't the longest of games. But the replay value it holds for younger audiences when playing as part of a team makes it a worthwhile experience that children will without a doubt love."

This sense of repetition is present within the game’s enemies as well. The play on generic video game robots fit perfectly fine within the theme of the game. Plankton appears in the form of a giant mech as does his ally bosses. So the minions of this evil genius appearing as “mini-me’s” are fine. But as I mentioned before it’s a play on generic video game robots, and this kills the variety as to how you go about your battles. It also seems like an easy way out when the need for experimentation with sea-life based enemies could have been much more enjoyable.

The three main boss battles you go through work on a cut and paste formula, but it’s the distinctive personalities of the characters themselves that encourage you to play. The stages take on a different layout to what you’ve become familiar within the rest of the game, and the boss battles bare certain similarities to the earlier Crash Bandicoot games of the original PlayStation. Those familiar with the series will notice this immediately and will no doubt reap the enjoyment out of it.

Lasting around three and half to fours this isn’t the longest of games. But the replay value it holds for younger audiences when playing as part of a team makes it a worthwhile experience that children will without a doubt love. The choice to play solo is fine if you have no alternative, but playing with a group of friends is clearly what this game aims to deliver.

Authentic characters and an emphasis on multi-player give the game a decent amount of replay value for younger audiences.

A lack of creation and exploration in enemy types and level design weaken the gameplay and motives to keep playing.

Final Verdict:
GOOD
Authentic and enjoyable, SpongeBob SquarePants brings the long lost fun back into the offline co-operative experience.
A copy of this game was provided by Developer/Publisher/Distributor/PR Agency for review purposes. Click here to know more about our Reviews Policy.