Square Enix Files Trademark For ‘The Seeds Of Salvation’ 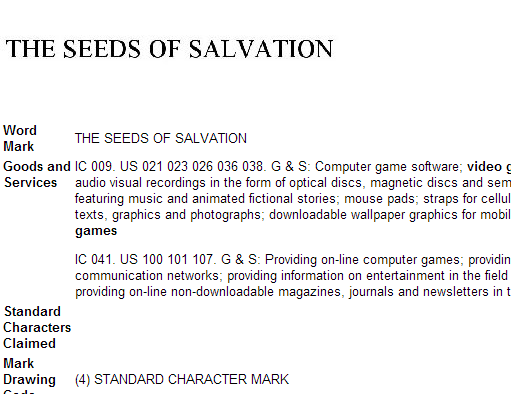 Square Enix has just registered an all new trademark in the US for a game titled ‘The Seeds Of Salvation’. Given Square Enix’s title-release history, it would be safe to assume that, while the details of The Seeds Of Salvation are as yet unannounced, it will likely be a role playing game in some form or another.

The identification details of the trademark include a number of specifications that hint at which gaming mediums The Seeds of Salvation will be released across. The stipulation of both computer and video game software (in cluding discs and ROMs) points to a release across both PC and console. And the number of mobile mentions in the trademark, such as ringtones, downloadable graphics and text imply that, whether there will be a release of the game across the mobile platform or not, there will at least be some form of downloadable mobile content.

At this point in time there have been no details released concerning the game’s plot, length, or gameplay. Stay tuned to Gamingbolt as details are released for The Seeds of Salvation.

Tagged With: Square Enix, The Seeds of Salvation